One of the reasons I'm so fascinated with paleontology is that it induces me to picture what the Earth looked like a loooooooong time ago -- and to consider a planet that was nothing at all like it is now.

I remember when I first realized something about the three earliest periods of Earth's history -- the Precambrian, Cambrian, and Ordovician -- from a kids' book on prehistory, when I was maybe ten years old.  There was a casual statement that during these periods, there was no life on land.  Every living thing there was lived in the water.

And I thought, "Wait, that can't mean what it sounds like."

But it does.  During those three periods -- which together comprise 90% of the history of the Earth -- the land masses were completely barren.  Rock, sand, dust, dirt (with no organic matter whatsoever), stretching over entire continents.

You think the Sahara is a vast wasteland.  Every square kilometer of the early Earth looked like that, without even the occasional palm tree or camel to break the monotony.

Strange to think of an Earth so unlike what we see around us today.  Even after life colonized the land -- starting with plants living around the margins of bodies of water, in the early Silurian -- it would still have looked pretty foreign, and I'm not just talking about dinosaurs, here.  During the Carboniferous Period there were dragonflies with three-foot wingspans, and centipedes almost big enough to ride.  The Devonian, one step earlier, had some fish called placoderms that look like they're wearing poorly-fitting plate armor. 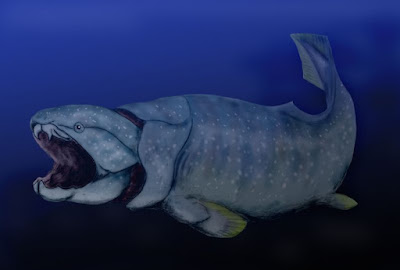 In fact, it was a discovery dating to the Devonian that spurred me to write this post.  Last week a paper appeared in Current Biology about a fossilized forest in Xinhang, China that spreads over 250,000 square meters.

Quite a significant find.

Don't, however, picture your typical forest here.  These weren't oaks and maples and pines, they were lycopsids, a group now represented only by club mosses, small and generally unassuming plants you'll find in moist forest understories.  But in the Devonian, they got big.  The largest were over seven meters tall, or about the size of your average dogwood or crabapple tree.

Imagine a whole forest of these short, skinny trees and you've got the idea.

"The large density as well as the small size of the trees could make the Xinhang forest very similar to a sugarcane field, although the plants in Xinhang forest are distributed in patches," said Deming Wang, a professor in the School of Earth and Space Sciences at Beijing University, who co-authored the study.  "It might also be that the Xinhang lycopsid forest was much like the mangroves along the coast, since they occur in a similar environment and play comparable ecologic roles."

So our picture of this odd world, when fish were the dominant life-form and the only land animals were primitive amphibians, insects, and arachnids, is becoming more complete.  Think about that next time you go for a walk in the woods.  You might not only ponder what the land you're walking on looked like 400 million years ago, but how different it might look like 400 million years from now -- during which evolution will have had plenty of time to generate, as Darwin put it, "endless forms most beautiful and most wonderful."

Posted by Gordon Bonnet at 5:08 AM