A recent discovery of a proto-hominid has been raising eyebrows in the paleoanthropology circles, for a variety of reasons.

Called Rudapithecus, it dates from the late Miocene Epoch, around ten million years ago.  It was small, at least compared to some of our other cousins, weighing in at between twenty and forty kilograms, roughly the size of your average golden lab.  Exactly where it fits in our family tree isn't certain yet, although most likely it's a collateral line, not one that is directly ancestral to Homo sapiens.

So far, nothing that surprising.  But there are a few things about Rudapithecus that are causing some serious head-scratching.  Among them:
So this will require some serious reworking of our understanding of primate evolution. 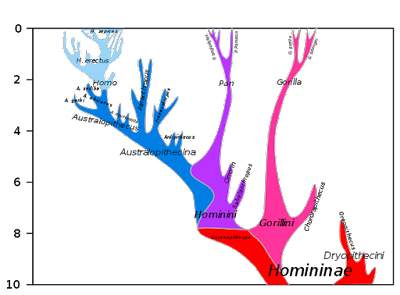 Lineage of hominins. That's us, way up near the top left. The left-hand scale is a time axis, in millions of years before present. [Image licensed under the Creative Commons Dbachmann, Hominini lineage, CC BY-SA 4.0]

"Rudapithecus was pretty ape-like and probably moved among branches like apes do now—holding its body upright and climbing with its arms," said Carol Ward, a Curators Distinguished Professor of Pathology and Anatomical Sciences in the University of Missouri School of Medicine, and lead author of the study.  "However, it would have differed from modern great apes by having a more flexible lower back, which would mean when Rudapithecus came down to the ground, it might have had the ability to stand upright more like humans do.  This evidence supports the idea that rather than asking why human ancestors stood up from all fours, perhaps we should be asking why our ancestors never dropped down on all fours in the first place...  We were able to determine that Rudapithecus would have had a more flexible torso than today's African apes because it was much smaller...  This is significant because our finding supports the idea suggested by other evidence that human ancestors might not have been built quite like modern African apes."

So -- contrary to our usual picture of our ancestry -- it may be that the most recent common ancestor of humans, chimps, and gorillas (somewhere in the red slice on the graph) might have been more like us than they were like the other great apes, at least in terms of locomotion.  Kind of punches another hole in our self-importance, doesn't it?  We tend to have the attitude, "Of course we're the most highly evolved primate.  The further back you go, the more primitive and ape-like they get."  Now, it's looking like we may need to reconsider that.  It may be that the mostly-quadrupedalism of chimps and gorillas may have been the more recent innovation.

In any case, I'm sure this won't be the last you hear on the subject.  As with everything in science, it's subject to revision if new data comes to light.  And given the discovery of this fossil in a most unlikely location, I'm not even putting any money on where the next bit of evidence will come from.