Being the end of summer, I thought my readers would be in the mood for shorts. 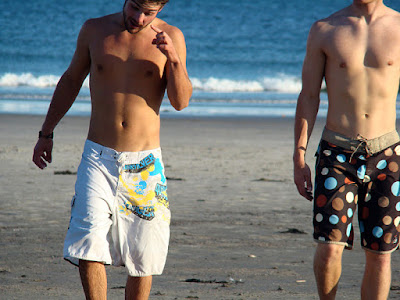 No, not those kind of shorts.  [Image licensed under the Creative Commons marcore! from Hong Kong, China, Board shorts 4, CC BY 2.0]

Today I've got three quick-takes for you from the world of the weird, starting with one of my favorite places: the beautiful land of Scotland.

A company called "Snaptrip," a UK-based holiday booking company, is offering free stays in Scotland -- for life -- for the first people who can provide proof that the Loch Ness Monster is real.

"We want to get our hands on as much evidence as possible to prove that the monster is real and give our customers yet another reason to visit the beautiful Scottish Isles," said Snaptrip founder and CEO Matt Fox.  "If you have any proof, please get in touch and let us know!"

Fox said that his company will foot the bill for five Scottish holidays per year, for life, for the first twenty people who come up with "satisfactory evidence."  Which is pretty optimistic, given that people have been at this for over a hundred years and have yet to produce any evidence that would convince someone who wasn't already leaning that direction.  So the chances of one person coming forward to claim the prize are low to nonexistent, much less twenty.

Still, the idea of free trips to Scotland is a pretty nice incentive.  If I had some good cryptid-searching equipment, I'd probably give it a go myself.  In any case, if any of my readers are so inclined, here's an opportunity to use your hunting skills for a reward other than the notoriety.

Second, there's a group in Thailand that is meditating daily, with the goal of inducing aliens to help us avoid a nuclear apocalypse scheduled for 2022.

The group, UFO Kaokala, got its name and its mission after one of the members spotted a UFO on top of Mount Khao Kala in Thailand, so now they meet there every day to try and get the aliens to come back.

Oh, and I forgot to mention, the aliens are apparently from Pluto.  So seems like they'd find it a bit warm here on Earth, given that the average surface temperature on Pluto is -230 C, or only 44 degrees above absolute zero.  You'd think that even if they landed on a mild spring day on Earth, they'd melt or spontaneously burst into flame or something.

Who knows, though?  If they have the technology to get here, they probably have refrigerated suits.

"Instead of eating food, [the Plutonians] eat capsules," said Wassana Chansamnuan, who has been part of UFO Kaokala since 1998, following her receipt of a telepathic message from the aliens.  "They can communicate with anyone, regardless of their native tongue.  Most importantly, they follow a sabai sabai, or relaxed, working style.  When disaster strikes, they don't want humans to stress out, at least not too much."

Well, if there's a nuclear apocalypse, I think I'd stress out no matter how much I'd meditated, but that's just me.

Apparently the goal of attracting the aliens is working, if you believe fifty-year-old Ukrin Thaonaknathiphithak, who I had to mention just so I could include his last name in my post.  He said he's seen seventeen UFOs at one time, which seems a little excessive, but maybe he's really good at meditating.

Still, the outlook is kind of grim.  Only thirty percent of the human population is going to survive past the nuclear war in 2022, said long-time member Ann Thongcharoen.  "At the time of crisis, the aliens will choose good people to live in the new age," she says.  "So people who think about dhamma or cosmic law or Buddha are good universal citizens," and will presumably be the ones the aliens will select.

So I guess I'm pretty well fucked either way, but I suppose that's not really a surprise to anyone.

Speaking of death, doom, and gloom, our last story is about people who want to cheat the Grim Reaper, and I'm not referring to Mitch McConnell, although cheating him would be kind of nice, too.  This is the brainchild of a company called HereAfter, which for a fee (of course) will upload hours and hours of your voice saying stuff, so when you die, you can still have a conversation with your loved ones.

"My parents have been gone for decades, and I still catch myself thinking, 'Gee, I would really like to ask my mom or dad for some advice or just to get some comfort,'" said Andrew Kaplan, who has agreed to be one of HereAfter's first guinea pigs.  "I don’t think the urge ever goes away...  I have a son in his thirties, and I’m hoping this will be of some value to him and his children someday."

HereAfter's founders, Sonia Talati and James Vlahos, have their sights set higher than just prerecorded messages, though.  They're hoping to eventually use software that can form a picture of someone's personality through asking increasingly detailed questions, and download that personality profile along with the recorded voice into an emotionally intelligent digital personality to create a "PersonBot" that could interact with the survivors in the same way the original person would have.

Me, I'm not so fond of this idea.  I mean, I love my friends and family as much as anyone, but this really doesn't seem to be the answer.  I was really close to my Grandma Bertha, my father's mother, but if I was rooting around in the kitchen for a snack and I heard Grandma Bertha's voice saying, "Gordon, dear, you really need to eat something more nutritious than leftover vanilla pudding and a bag of potato chips," my reaction wouldn't be to get all sentimental about how nice it was to have her back.  My reaction would be to scream like a little child and run out of the room.

Also, this kind of thing always makes me think, "Haven't these people ever watched a science fiction movie?  Like, in their whole life?"  Because this has been tried before multiple times, and it never ends well.  BerthaBot ends up taking over the entire internet, killing various scientists, politicians, and innocent civilians including Sean Bean in the process, and a crack team of operatives led by Chris Evans has to infiltrate the Central Computer and unplug BerthaBot, at the end ignoring her plaintive voice crying out that for heaven's sake Chris really needs to put a shirt on before he catches his death of cold.

So I'm not really a fan.  If we're gonna put our time into something, immortality-wise, I would rather the effort go into ways to extend our healthy lifespans.  Because even if they somehow were able to upload my personality into the Cloud, it's not going to make much difference to the real me, you know?  I'll still be dead.

Anyhow, that's our shorts for today.  Free trips to Scotland, meditating to avert the apocalypse, and digital immortality for our voices.  It's nice, in a way, to see that people are still loping along, doing weird and pointless things, despite the fairly horrible stuff in the news lately.  Regardless of what happens, we're still capable of engaging in truly bizarre behavior.

Which now that I come to think of it, isn't really that comforting.