The case of the crystalline eyes

One comment from students that consistently drove me crazy, as a science teacher, was, "Why do we have to learn this?  It could all be proven wrong tomorrow."

The implication is that since science alters its models based on new evidence, we could wake up one morning and find that we have to throw out the chemistry texts because the alchemists were right after all.  As I've mentioned before here at Skeptophilia, such complete recasting of our understanding is awfully uncommon; the majority of scientific discoveries refine the models we already have rather than completely overthrowing what we thought we understood.

The most frustrating thing about that attitude, though, is the suggestion that science's capacity for self-correction is some kind of flaw.  Is it really better to persist in error despite new information, damn the opposition, rather than saying, "Okay, I guess we were wrong, then," and fixing the mistakes?

I saw a great example of how science handles that sort of thing last week, when a fantastically well-preserved fossil of a crane fly 54 million years ago called into question a long-held theory about the eyes of trilobites.  You've probably seen crane flies; they're the insects that look like large, bumbling mosquitoes, entirely harmless (although two European species, now introduced and invasive in the United States, feed on plant roots and will muck up your lawn).

Here's the fossil in question, specifically a close-up of its multi-faceted eyes: 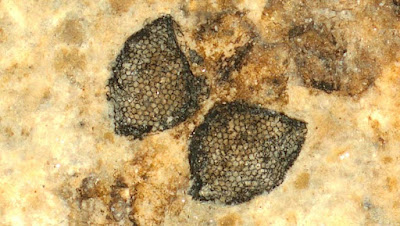 What was interesting about this fossil was that the lenses of the crane fly's compound eyes were composed of crystals of calcite, and that put the researchers -- a team led by Johan Lindgren, a paleontologist at Lund University in Sweden -- in mind of a claim about the eyes of trilobites, a distantly-related group of much older arthropods that went extinct in the massive Permian-Triassic Extinction, 252 million years ago.

In a paper in Nature, Lindgren et al. point out that crystals of calcite in fossilized trilobites were interpreted as being the lenses of the animals when they were alive -- i.e., the crystals were present in trilobites' eyes while living, and were left behind in the fossils.  But the discovery of similar crystals in fossil crane flies calls that into question; after all, there are still living crane flies, and none of them have crystalline eyes (nor do any extant groups of insects).

So it appears that the calcite crystals formed during the fossilization process -- that they're "artefacts," which is paleontology-speak for a feature that was generated by inorganic processes after the organism's death.  Lindgren's point is that since the crystals are artefacts in the crane flies' eyes, it's pretty likely they are in the trilobites' eyes, as well.

This discovery overturns something we thought we understood -- and while I imagine that the paleontologists who framed the crystal-eyes-in-trilobites model are saying, "Well, hell," they're not staunchly refusing to budge.  In science, our models stand or fall based upon evidence and logic; if the evidence changes, the models have to, as well.

And that, really, is the main strength of science as a way of knowing.  We continue to refine it as we know more, homing in on a model that works to explain all the available data.

Even knowing that "it could all be proven wrong tomorrow" -- but very likely won't be -- we keep moving forward, whether or not it lines up with our preconceived notions of how the world works.