The most beautiful brain network

A couple of weeks ago, I wrote a piece here at Skeptophilia about some fascinating new research suggesting that there are links between our perceptions of artistic, musical, and mathematical beauty, and expressed some puzzlement about how those could possibly connect.  In one of those lovely near-synchronicities that happen sometimes, today I happened upon some new(er) research showing what the underlying connection might be -- in one single region of the brain.

In a paper published this week in the Proceedings of the National Academy of Sciences, a team made up of Edward A. Vessel and Ayse Ilkay Isik (of the Max Planck Institute), Amy M. Belfi (of the Missouri University of Science and Technology), Jonathan L. Stahl (of Ohio State University), and G. Gabrielle Starr (of Pomona College) showed that with different sorts of visual stimuli, our sense of aesthetic pleasure comes from activation of a part of the brain called the default-mode network.  The authors write:


Despite being highly subjective, aesthetic experiences are powerful moments of interaction with one’s surroundings, shaping behavior, mood, beliefs, and even a sense of self.  The default-mode network (DMN), which sits atop the cortical hierarchy and has been implicated in self-referential processing, is typically suppressed when a person engages with the external environment.  Yet not only is the DMN surprisingly engaged when one finds a visual artwork aesthetically moving, here we present evidence that the DMN also represents aesthetic appeal in a manner that generalizes across visual aesthetic domains, such as artworks, landscapes, or architecture.  This stands in contrast to ventral occipitotemporal cortex (VOT), which represents the content of what we see, but does not contain domain-general information about aesthetic appeal.

Using fMRI studies, the researchers compared the responses of the brains of volunteers to three types of visual stimuli; art, architecture, and photographs of natural landscapes.  The responses of the visual cortices of the test subjects showed great variation between these three different types -- evidently the brain's effort to categorize and interpret what it's seeing, so it's no great surprise that you'd respond differently while seeing the Mona Lisa than you would looking at Chartres Cathedral.

What was surprising, though, is that while viewing visual stimuli the test subjects found aesthetically pleasing, all of them had a high response in the default-mode network, which is usually associated with contemplation, imagination, self-reflection, and inward thought.  It's uncertain if the DMN actually encodes the basics of aesthetic response, but this certainly suggests a critical role.  "We don't know yet if DMN actually computes this representation," said Edward Vessel, lead author of the paper, in an interview in EurekAlert.  "But it clearly has access to abstract information about whether we find an experience aesthetically appealing or not."

This suggests to me a couple of interesting directions this research could go.  Obviously, it'd be intriguing to find out of the DMN is also active with other types of aesthetic appreciation (such as musical and mathematical aesthetics, the subject of the previous research).  What I'd find even more fascinating, though, is to see if there's a difference in the activity of the DMN depending upon how strongly the individual is aesthetically moved.  Those responses are so highly individual that finding a biological underpinning would be amazingly cool.  Why, for example, was my wife moved to tears while looking at paintings in a Van Gogh exhibition we attended a couple of years ago in New York City?  Why do I find Édouard Manet's 1882 masterpiece A Bar at the Folies-Bergère so emotionally evocative, while a lot of other art from the same period doesn't really grab me one way or the other? 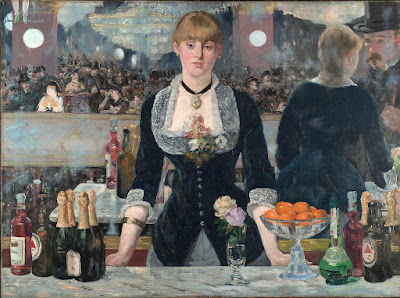 So this could be a window into finding out -- at least from a neurological standpoint -- how our brain modulates our aesthetic response.  The "why," of course, is more inscrutable -- demonstrating in an fMRI that I go into rapture hearing Stravinsky's Firebird isn't telling me anything I didn't already know, after all, and doesn't answer why I don't have the same response hearing Rachmaninoff's Piano Concerto #2.


But at least finding a neurological basis for such judgments would be a step forward.  The Vessel et al. research is a fascinating first step into understanding the sweetest of human behaviors -- our perception of beauty in the world around us.