I've dealt more than once here at Skeptophilia with the repeated mass extinctions the Earth has undergone.  Part of this is that I have an admitted fascination with things that are big and powerful and can kill you.  These include:
The latter is thought to have been the prime mover of the Cretaceous Extinction, which occurred 66 million years ago and killed an estimated 75% of the species on Earth, including all of the large dinosaurs (the exception being the lineage that led to modern birds).  Here's a cool, if terrifying, simulation of what it'd be like if the Earth got hit by an asteroid five hundred kilometers in diameter (the Chicxulub Meteorite, which caused the extinction, is estimated to be about a tenth that diameter, so you can scale down your picture of that event accordingly):


But dwelling on that stuff is a little morbid, even if it's kind of awe-inspiring.  So today, I'd like to look at some recent research that looks at how life recovered after the cataclysm -- discoveries that suggest the encouraging idea that even with a catastrophe, life can bounce back amazingly quickly.

A few years ago, Ian Miller and Tyler Lyson of the Denver Museum of Nature and Science were involved in a fossil dig in Corral Bluffs, Colorado, and made a rather astonishing discovery.  Initially the area seemed to be rather fossil-poor, but it had a great many concretions (roughly spherical blobs of cemented sediment).  When Miller and Lyson split one of these open, they found it was full of skeletal remains.

It turns out Corral Bluffs represent sedimentary layers of rock deposited immediately after the collision, so it provides an incredibly detailed record of the years following.  Large animals and flowering plants (especially trees) were hit the hardest by the extinction; despite the prevailing wisdom that "dinosaurs died and mammals didn't," the more accurate statement is "big species were much more likely to die than little ones."  The bottleneck, in fact, seems to have taken out all the mammals larger than your average rat.  (Miller and Lyson found no evidence of mammals larger than six hundred grams that survived the extinction.)  Miller, who is a paleobotanist, concentrated not on the animal remains but the plants -- especially the 37,000 pollen grains he found fossilized in the sediment layers.  And from this, a picture began to emerge of what things were like in the years following the collision, which was described this week in a fascinating paper in Science.

The largest group of plants to come through the bottleneck were ferns, which thrive in disturbed areas and have spores that are pretty damage-resistant.  Unfortunately for the animals, fern leaves and roots are rather low in nutrients, so for a while, body sizes remained small because there simply wasn't enough food around to support big, or even medium-sized, herbivores.  But within a few thousand years -- a flash, evolutionarily speaking -- Fern World was replaced by Palm World, as proto-monocots (the group that contains not only palms, but grasses, lilies, orchids, irises, and a variety of other familiar plant families) evolved to be more robust.  Palms have oily fruit that are high in sugar, and there's a commensurate jump in mammalian body size, with species showing up that weighed five kilograms.

Palms were superseded by the ancestors of today's walnuts and hickories a hundred or so thousand years after that, and in "Pecan Pie World" (as Miller and Lyson call this era), and the higher nutritional quality of those seeds fueled another jump in body size, with the largest ones reaching thirty kilograms (the size of a large dog).  And after seven hundred thousand years, legumes diversified, and the high protein content of these species triggered another growth spurt, topping out at fifty kilograms -- a hundred times larger than the survivors of the collision, in less than a million years.

Nota bene: the growth in size wasn't done yet.  The Oligocene Epoch, from 34 to 23 million years ago, saw the largest land mammals that have ever existed, including the enormous Baluchitherium, a behemoth that could have converted an African elephant into an African elephant pancake: 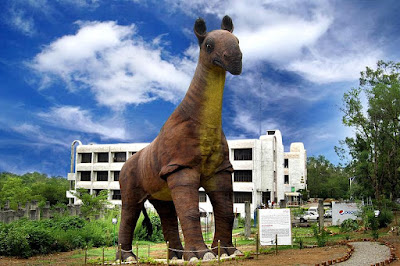 The Miller and Lyson study offers us a message that is simultaneously reassuring and terrifying.  First, the human-caused "Sixth Extinction" that we are almost certainly undergoing as we speak is not going to eliminate life on Earth, and the species that survive will quickly spring back and diversify once we stop doing whatever we can to make the planet uninhabitable.  But the cautionary tale is that no matter what, it won't be what we had.  The diversity of flora and fauna that existed before the Chicxulub Collision was gone forever, and even though "life found a way" (to borrow a phrase from Jurassic Park), what evolved afterward was dramatically different than what was lost.  And, to put not too fine a point on it, the years immediately following the bottleneck were pretty freakin' horrible for all concerned, with an entire planet laid waste, and the animals that weren't directly killed by the impact itself largely facing habitat loss and rampant starvation.

So we shouldn't be so quick to adopt the Pollyanna-ish "it'll all be fine, nature is resilient" attitude toward our current fossil-fuel-crazy, pollution-blind willfully ignorant behavior.  If anything, we should recognize how fragile it all is -- and how, if we push too hard, we're likely to see a collapse of catastrophic proportions.  While we can pretty much count on evolution eventually producing a whole new set of what Darwin called "endless forms most beautiful and most wonderful," there's more than a passing chance that we won't be around to see them.