Following hard on the heels of yesterday's post about belief in the occult causing you to receive visits from the Shadow World, today we have: a real estate company who will provide a paranormal investigation of any home you're considering buying, to make sure that it doesn't come with spirits pre-installed, as it were.

Bungalo, a company with offices in Dallas, Atlanta, Charlotte, and Tampa, is offering a special during the spooky month of October, providing a "Paranormal Inspection Report" of properties for sale.  Their site says:


To perform the Paranormal Inspections on our homes, we brought in known experts in the paranormal sciences.  Utilizing their keen insight into the paranormal world and the latest realm-to-realm communication technology, these paranormal pros have examined our homes from top to bottom for anything out of the ordinary.

The inspectors then disclose their findings to you, the home buyer, through an official Paranormal Inspection Report, which you can find on any listing’s document vault on our website.  If an inspector does encounter any unwanted paranormal activity in a home, the space in question will be properly cleansed for the buyer’s peace of mind.

One of their inspectors is paranormal researcher Becky Moyer, who wanders around with a device called a "Spirit Box" that detects the EMF fluctuations many believe are associated with the presence of supernatural entities. 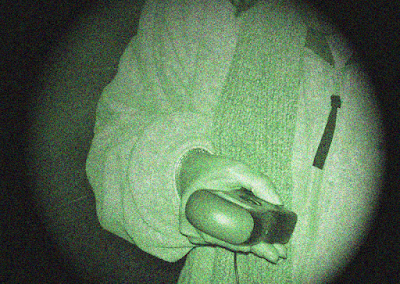 So I looked into that a little, and man, there are a lot of models of "Spirit Box."  One of them, the "Ghost Meter EMF Sensor," is only $34.95 (plus shipping and handling), and I thought it might be instructive to take a look at some of the (804) ratings customers had given it.  Many of them were laudatory, claiming that the thing had found ghosts pretty much all over the place, but a few of them were less positive:
And then there's this one, that should win an award in the Run-On Sentence Competition 2019:
So I guess it's useful if you're not sure where your vents are.  Or, considering some of the other reviews, your couch, fridge, cereal, car, dog, window, rocks, or clothes.

In any case, it's to be expected anything you use will get mixed results, because if there was unequivocal evidence of ghostly presences, that would pretty much settle the debate over whether the paranormal world exists.  I actually have an EMF Ghost Detector app on my phone, and periodically I'll wander around my house to see what the Spiritual Plane is up to.  Not much, most days, although it does kind of go crazy when I get near my computer, which could either be because (1) it's a piece of electronic equipment and thus emits an EMF signal by default, or else (2) it's possessed.

The latter is as good an explanation for some of its behavior as any.

In any case, back to the real estate company's offer.  What I'm most curious about is the last bit, which is how you "cleanse" a place of paranormal entities.  I'm guessing bringing in a Catholic priest to do an exorcism is a bit extreme, so what are our other options?  Burning some incense?  That wouldn't work if it was, say, the spirit of a dead hippie.  Telling the spirit, politely but firmly, to get lost?  Can't imagine it'd be that easy.

But the agency's website didn't elaborate on that part, so I guess we'll just have to assume that they have their methods.

I kind of wish there'd been this option when I bought my house.  Our younger son said he always felt like there was "something there" when he was alone downstairs working in the workshop (which is where he spent a great many of his waking hours).  He said he didn't think it was hostile, but did catch movement out of the corner of his eye more than once when everyone, including the dogs, were upstairs.  And considering how weird this house is in other respects -- the previous owner was notorious for ill-conceived and (often) partly-completed home improvement ideas, what my dad called "Do It To Yourself Projects" -- it wouldn't surprise me if there were strange forces at work here.

But nothing was mentioned in the Disclosure Form, and in any case we've been here for seventeen years, so I guess we're stuck with it either way.

Posted by Gordon Bonnet at 4:33 AM