Regular readers of Skeptophilia know that I have scant patience for creationists, but what really grinds my gears about them is that so often their questions and objections to evolutionary theory are an indication that they haven't even bothered to find out what the scientists are actually saying.

A few examples, that I am still seeing and hearing, even though a three-minute Google search would answer them in a way even a third-graders would understand:

1.  If humans came from monkeys, why are there still monkeys?


If God created humans from dust, why is there still dust?

2.  Evolution is ridiculous.  They're expecting you to believe that a fish gave birth to a bird.


No, actually, no one is trying to get you to believe that, and your apparent failure to understand what the theory says is not evidence that it's wrong.

3.  Scientists have disproven/discredited (choose as many as you want from the following): radioisotope dating, Darwin's theory of natural selection, the existence of beneficial mutations, the antiquity of the Earth.  They are abandoning evolution as a failed theory in droves.


No, they haven't, and no they aren't.  Next question.

4.  If evolution is true, there's no reason to be moral, and there should be no problem if we run around murdering and pillaging and raping all the time.


All you have to do is look at the degree of cooperation and social bonding in a wolf pack to recognize why that's wrong.  Oh, and if all that's keeping you from murdering and pillaging and raping is your religion, then I think you're the one with the questionable moral standards, not me.

5.  There are no transitional fossils.  There's no hard evidence of "missing links" between different groups of organisms.


There are actually thousands of fossils of transitional species.  The problem is, if you tell a creationist, "Look, here's a species B that's a transition between A and C!" he'll say, "Yeah, well now you have two gaps -- between A and B, and between B and C!"

It's the transitional fossil question that brings up this topic today, because of an awesome discovery in Japan that was the subject of a paper in Communications Biology last week.  In "An Unusual Bird (Theropoda, Avialae) from the Early Cretaceous of Japan Suggests Complex Evolutionary History of Basal Birds," Takuya Imai, Yoichi Azuma, Soichiro Kawabe, Masateru Shibata, and Kazunori Miyata (of Fukui Prefectural University), and Min Wang and Zhonghe Zhou (of the Chinese Academy of Sciences) describe a fascinating new species, christened Fukuipteryx prima, that is adding to what we know about the evolutionary history of birds, and their relationship to theropod dinosaurs. 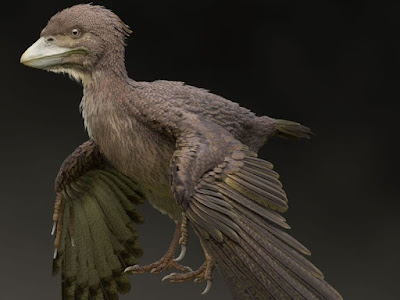 Grumpy bird is sick of those creationists' shit.  [Restoration of Fukuipteryx prima by Masanori Yoshida]

So Fukuipteryx (and Archaeopteryx as well) are basically cousins to modern birds (the "Ornithothoracines," a term that means "bird thorax" and signifies an internal chest structure similar to modern birds).  But it clearly shows the transition of an animal that was more dinosaur-like into something more bird-like, adding one more link in the chain between the two groups and further strengthening the assertion that, basically, modern birds are dinosaurs.

I'm sure it won't take the creationists long to start disputing all this, however.  As I've remarked before, if you disbelieve in the methods of science, you're kind of unreachable.  (I've heard it put, you can't logic your way out of a belief you didn't logic your way into.)  But for the rest of us, this is just one more fascinating piece of the puzzle -- another one of Darwin's "endless forms most beautiful and most wonderful" that evolution has generated on our planet.

Posted by Gordon Bonnet at 3:14 AM