Did you hear about Ohio House Bill 164?

It's been called the "Student Religious Liberties Act."  It contains four provisions:

It's the last one that made me sit up and take notice.

Despite being an atheist, I have no problem with public schools allowing religious groups to meet on their property, as long as there's no statement (overt or implied) that students are required be there.  I don't really have a problem with provision #2 except that it's ambiguous -- who is leading the religious expression?  If students want to say a prayer before an exam, no big deal.

If the teacher leads the class in a prayer before an exam, big deal. 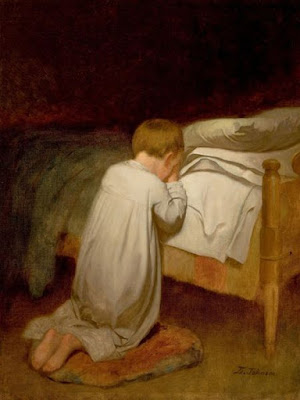 Eastman Johnson, A Child at Prayer (1873) [Image is in the Public Domain]

Just hang on a moment.

So what you're telling me is that my biology students could "engage in religious expression" in their homework, to the extent of saying the Earth is 6,000 years old and life was whooshed into existence by a Big Dude in the Sky?  That they could claim radioisotope dating doesn't work?  That they could state that the Grand Canyon was formed in a big, worldwide flood, and the only survivors were a 700-year-old man and his family who rescued two of each of the nine-million-odd species on Earth, conveniently dropping them off in their ancestral homelands afterward?  And all the water just sort of "went away?"

If an administrator told me I had to do that, my response would include the word "No," but the rest of it would be barely printable without a "strong language" warning.

Teachers are under no obligation to coddle students' erroneous beliefs, whether or not they come under the heading of "religion."  If a kid comes in and tries to convince me homeopathy works or that vaccines cause autism or that there's a secret code in our DNA implanted there by Ancient Aliens, I am abrogating my duty as a science teacher if I don't (gently and kindly) show them why they're wrong.  That's what science is about -- using the tools of inference, logic, and evidence to figure out how things work.

If your wild imaginings, fears, or wishful thinking lead you to an answer that is demonstrably wrong, I'm sorry, but I'm not going to pretend you're right just out of some misguided sympathy.   And I don't care particularly where the aforementioned wrong stuff came from.  It could come from Monster Quest or from Chariots of the Gods... or the Bible.  The source is completely irrelevant.

What matters is that science is about figuring out the truth, not about making us comfortable.

There are folks who might think my fury about this is an overreaction, that provision #4 just guarantees that students can put religious imagery or references into art, personal essays, and so on.  This is nonsense; students have always been able to do that.  (There was a claim zooming around the internet a while back about a kid who had turned in a paper saying her biggest inspiration was Jesus, but the Evil Secular Teacher wrote in red ink "Remove Jesus Please!" and gave her an F.  The illustration was obviously photoshopped, and the whole story made up, but that didn't stop a lot of extremely religious people from posting indignant screeds about how the United States was going to hell.)

No, provision #4 is yet another attack on science teachers, an attempt to shoehorn Genesis and the Great Flood into the classroom.  It's a sneaky way to protect kids who claim there's doubt about evolution (there isn't), that there's no evidence of the Big Bang (there is, plenty of it), and that plate tectonics is false (it's not), allowing them to write down blatant falsehoods in a discipline that is supposed to value the truth, and still not be penalized for it.

It is, simply put, another attempt to destroy the separation of church and state.

Oh, and I didn't tell you the worst news: Ohio House Bill 164 passed.

I can only hope that the fight's not over, that this legislation will generate lawsuits about constitutionality, but it does demonstrate the fact that the people who would love to see the United States become a fundamentalist theocracy aren't giving up.