Chewing gum and talking about talking

Earlier this week I looked at three cool archaeological discoveries -- cave art in Indonesia, and two finds in Egypt, one of a bone from someone killed in the battle recorded on the Rosetta stone, and the other about a researcher who found that the practice of tattooing has been around for a very long time.

But we're not done with mind-blowing archaeological stories, apparently, because there are two more that I just found out about, and which (if anything) are even cooler than the ones I wrote about Monday.

I learned of the first one from my friend, novelist and blogger Andrew Butters, whose blog Potato Chip Math is a must-read.  In this one, we find out that a team of geneticists have sequenced the DNA of a girl who lived in Denmark 5,700 years ago...

Well, technically, it was birch sap, but same idea.  They were able to extract her DNA from the gum and sequence her entire genome, which allowed them not only to figure out what ethnic group she was from, but to make a good shot at her appearance.  She had dark skin and hair, they found, and blue eyes.  Here's an artist's reconstruction of what she might have looked like: 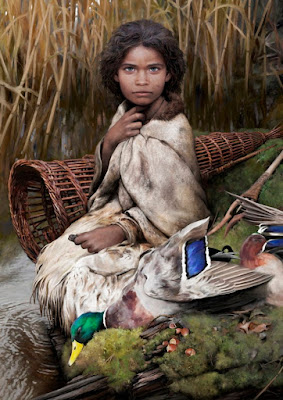 Analysis of the human reads revealed that the individual whose genome we recovered was female and that she likely had dark skin, dark brown hair and blue eyes.  This combination of physical traits has been previously noted in other European hunter-gatherers, suggesting that this phenotype was widespread in Mesolithic Europe and that the adaptive spread of light skin pigmentation in European populations only occurred later in prehistory.  We also find that she had the alleles associated with lactase non-persistence, which fits with the notion that lactase persistence in adults only evolved fairly recently in Europe, after the introduction of dairy farming with the Neolithic revolution.

The period she lived in was when northern Europe was taken over by people known as the "Funnel Beaker Culture," so named because of their characteristic narrow-based, highly-ornamented pottery: 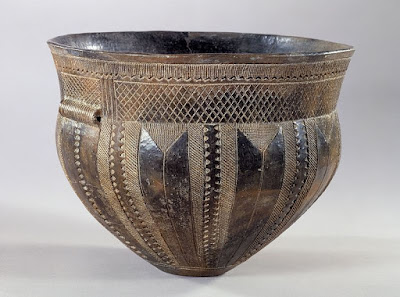 "It is amazing to have gotten a complete ancient human genome from anything other than bone,'' said study lead author, evolutionary geneticist Hannes Schroeder, of the University of Copenhagen, in an interview with Science Alert.  "The DNA is so exceptionally well preserved that we were able to recover a complete ancient human genome from the sample… which is particularly significant since, so far, no human remains have been recovered from the site."

The second story goes back a great deal further in time than the little Neolithic Danish girl, though.  In fact, it kind of crosses the line from archaeology into paleontology, because in a paper in Science Advances we find out that the ability to speak might have been around in primates for twenty million years.

The study, led by Louis-Jean Boë of the University of Grenoble, analyzes the mechanics of human speech, in particular how the morphology of the mouth, trachea, and larynx allow for the production of meaningful sound.  It's been thought for years that the advent of speech occurred when our ancestors' larynxes (voice boxes) gradually moved downward, pulling the back of the tongue backward and downward as well and giving the tongue more mobility to shape sounds.  But what Boë's team found was that even if you accept that as the hallmark of speech, it goes a long way further back than we'd realized.

So that means that at least from a mechanical standpoint, our distant ancestors had the capacity for speech.  Whether their brains were developed enough to say anything particularly interesting is still a matter of conjecture.  But evolution is all about minuscule gains.  Once the upper respiratory tract becomes capable of modulating sounds in a meaningful way, this puts selective pressure on the brain to refine its ability to understand and convey meaning with those sounds -- which puts pressure on the vocal apparatus to become better at producing subtle differences in sounds, and so on and so forth.  Which, as comedian Paula Poundstone notes, may not be entirely a good thing:

Be that as it may, it's a pretty cool discovery.  As I pointed out in Monday's post, it's incredible how much we can infer about our distant ancestors' appearance, culture, and abilities from evidence that would have been a closed book only ten years ago.  Our techniques for carrying out this research are only going to improve, so keep watching the journals -- my sense is that the amazing discoveries in this field have only just begun.