Dancing down from the past

It will come as no great surprise to anyone who knows me that I've struggled to overcome my shyness and inhibitions.

One of the ways this manifested was a reluctance to dance.  Dancing requires a willingness not only to get yourself out there on the dance floor, but to lose your self-consciousness and move to the music.  If you're constantly watching yourself, wondering what others are thinking, you'll never loosen up enough to be able to dance -- and as a result, you will move awkwardly.

I'd always advocated for throwing caution to the wind and enjoying yourself, simultaneously being unable for some reason to apply that same standard to myself.  But something shifted at the retreat I attended a month ago, about which I have written already.  The first night of the retreat, the leader said that one of the things we were going to be doing a lot of was dancing.  It's a really primal activity, he said, and is amazing for getting you out of your own head.

Well, my first reaction was panic.  The voice in my mind said, loud and clear, "YOU CAN'T DO THIS."  But as I related in my post, I did, and it was an amazing experience.  He was exactly right.  Dancing is freeing and exhilarating in a way very little else is.

Being a biologist, this got me to wondering why.  It involves moving your body, sure, but so do a lot of other things; and I can tell you in no uncertain terms that weed-whacking along the fence is equally physical, but is the opposite of exhilarating.  Music plays into it, of course, but I can also listen to music without that euphoric feeling occurring (although as I've also written about before here at Skeptophilia, I do have a very visceral and emotional reaction to certain music, another phenomenon that seems to have a neurological basis).

But put the two together -- music and movement -- and you have an extremely powerful combination. 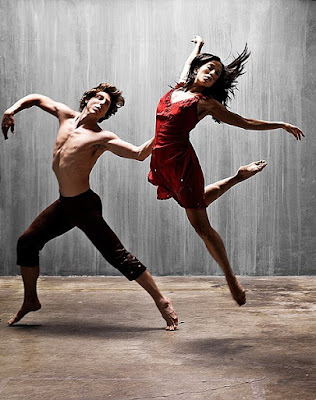 Why exactly this synergy happens is a matter of conjecture, but what is certain is that it goes back a long way in our evolutionary history.  A paper that came out last week in Proceedings of the National Academy of Sciences, by Yuko Hattori and Masaki Tomonaga of Kyoto University, shows that when chimpanzees are exposed to music, or even rhythmic sounds, they respond with something that looks very much like rudimentary dance.

"I was shocked," Hattori said to Eve Frederick, writing for Science.  "I was not aware that without any training or reward, a chimpanzee would spontaneously engage with the sound."

Music and dance are universal across human culture and have an ancient history.  One characteristic of music is its strong influence on movement.  For example, an auditory beat induces rhythmic movement with positive emotions in humans from early developmental stages.  In this study, we investigated if sound induced spontaneous rhythmic movement in chimpanzees.  Three experiments showed that: 1) an auditory beat induced rhythmic swaying and other rhythmic movements, with larger responses from male chimpanzees than female chimpanzees; 2) random beat as well as regular beat induced rhythmic swaying and beat tempo affected movement periodicity in a chimpanzee in a bipedal posture; and 3) a chimpanzee showed close proximity to the sound source while hearing auditory stimuli.  The finding that male chimpanzees showed a larger response to sound than female chimpanzees was consistent with previous literature about “rain dances” in the wild, where male chimpanzees engage in rhythmic displays when hearing the sound of rain starting...  These results suggest some biological foundation for dancing existed in the common ancestor of humans and chimpanzees ∼6 million years ago.  As such, this study supports the evolutionary origins of musicality.

Of course, this still doesn't answer what its evolutionary significance is; if I had to guess, it probably has to do with social cohesion and pair bonding, much as it does in humans.  But it's absolutely fascinating that the roots of dance go back at least to our last common ancestor with chimps, which would be between six and seven million years ago.

All of which makes me a little sad for what I missed in all those years I was too inhibited to dance.  I'll end with a quote from writer and humorist Dave Barry, which seems apt: "No one cares if you can't dance well.  Get up and dance."