Prelude to a cataclysm

I'm going to be taking a short break next week.  However, I hope you'll continue to send me ideas for new posts -- I'll be back in the saddle again soon, and I always value your suggestions.

The next Skeptophilia post will be Monday, January 6.  A very Happy New Year to all of you, and I hope this century's Roaring Twenties bring you everything you desire!

There'd be nothing like a good supernova to liven things up around here.

Far and away the most spectacular event in the universe, a supernova of a massive star releases more energy in a few seconds than our Sun will release in its entire lifetime.  The colossal explosion is set off by the exhaustion of the fuel in the star's core, a phenomenon that deserves a little more explanation.

Stars are kept in equilibrium by two forces, the outward pressure of the heat produced by fusion in the core, and the inward pull of gravity.  When the star runs out of fuel, the heat diminishes, and gravity wins -- causing a sudden collapse and a phenomenally quick heating of the star's atmosphere.

The result is a supernova, which temporarily outshines everything else in the near vicinity.  Actually, "outshine" is the wrong word; nearby star systems would be flash-fried, and even at a relatively safe distance the high-energy electromagnetic radiation could severely damage a planet's atmosphere.  (Just as a clarification, I'm talking about planets in other star systems; if there were planets in the supernova's system, they'd be instantaneously vaporized.)

The collapsed core of the star then becomes either a neutron star or a black hole, depending on the star's initial mass.  The exploded remnants continue to glow brightly for several months, before finally cooling, fading, and disappearing from the night sky.

As it happens, we've got a good candidate for a supernova not too far away (well, 640 light years away, which isn't exactly next door, but is still close by astronomical standards).  It's called Betelgeuse, and it's the familiar star on Orion's right shoulder.  A red supergiant, the star is about eleven times the mass of the Sun (putting it in the "neutron star" range after it blows itself to smithereens).  However, volume-wise, it's enormous; if you put Betelgeuse where the Sun is, its edge would be somewhere between the orbits of Jupiter and Saturn.

Yes, that's what it sounds like.  If Betelgeuse replaced the Sun, we here on the Earth would be inside the star. 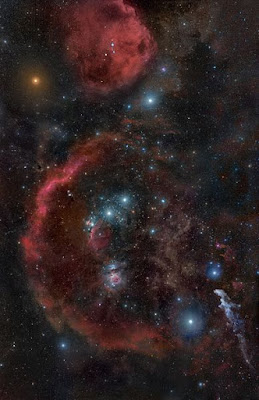 Betelgeuse has long been known as one of the better supernova candidates that are relatively close by.  Asked when it's going to explode, though, astronomers have always played it cagey; could be tomorrow, could be a hundred thousand years from now.  But its recent behavior has made a lot of scientists wonder if the actual date of the explosion might not be closer to the "tomorrow" end of the spectrum than we'd thought.

The star has been exhibiting some odd behavior lately.  It's long been known as a variable star, varying in magnitude between about 0.0 and +0.5 (the bigger the number, the fainter the star).  This means it oscillates between being the fifth brightest star in the night sky and the tenth, with the period of its variation averaging at a little over a year.  But in the last few months, it's defied expectations, dimming to a magnitude of +1.3 and dropping to 23rd place on the list of brightest stars.

Could this herald the beginnings of the collapse that initiates the supernova?  Could be, but the truth is, we don't know.  Supernovae are uncommon events, and nearby ones nearly unheard of -- the last one was "Kepler's Star," the 1604 supernova in the constellation of Ophiuchus.  So what the leadup will look like, we aren't really sure.

What's certain is that this is unprecedented, at least since we've kept detailed records.  It merited a press release from the Villanova University Department of Astronomy three weeks ago, so even the astronomers -- ordinarily the most cautious of scientists -- are admitting that something's up.

Now, we still don't know what's going to happen.  Like I said, we've never been able to observe the events leading up to a supernova before.  But you can bet that the astrophysicists are paying close attention.

And with good reason.  If Betelgeuse went supernova -- no, correction, when Betelgeuse goes supernova -- it's going to be spectacular.  It's estimated it will brighten to a magnitude of -10, which (for reference) is sixteen times the brightness of the full Moon, and over a hundred times the brightness of the planet Venus.  It will be easily visible during the day and will provide enough light to read by at night.  And this won't be a blink-and-you-miss-it occurrence; the supernova will only fade gradually, over a period of eight to nine months, and during that time it will be (other than the Sun itself) the brightest thing in the sky.

And I can say unequivocally that I hope it happens really soon.

It'd be nice to have something happen out there in the universe to take our minds off of how screwed up things are down here, you know?  It'd be a good reminder that there are bigger and more powerful things than we are, and our petty little squabbles are really pretty minuscule by comparison.

So as far as I'm concerned: bring on the supernova.