As silly as it can get sometimes, I am a dedicated Doctor Who fanatic.  I'm late to the game -- I only watched my first-ever episode of the long-running series four years ago -- but after that, I went at it with the enthusiasm you only see in the born-again.

The best of the series tackles some pretty deep stuff.  The ugly side of tribalism ("Midnight"), the acknowledgement that some tragedies are unavoidable ("The Fires of Pompeii"), the Butterfly Effect ("Turn Left"), the fact that you can't both "play God" and avoid responsibility ("The Waters of Mars"), and the terrible necessity of personal self-sacrifice ("Silence in the Library").  Plus, the series invented what would be my choice for the single most terrifying, wet-your-pants-inducing alien species ever dreamed up, the Weeping Angels (several episodes, most notably "Blink").

So it shouldn't have been a surprise when Doctor Who got a mention in this month's Scientific American, but it still kinda was.  It came up in a wonderful article by Caleb Scharf called "The Galactic Archipelago," which was about the possibility of intelligent life in the universe (probably very high) and the odd question of why, if that's true, we haven't been visited (Fermi's paradox).  Here at Skeptophilia we've looked at one rather depressing answer to Fermi -- the "Great Filter," the idea that intelligent life is uncommon in the universe either because there are barriers to the formation of life on other worlds, or that once formed, it's likely to get wiped out completely at some point.

It's even more puzzling when you consider the fact that it would be unnecessary for the aliens themselves to visit.  Extraterrestrial life paying a house call to Earth is unlikely considering the vastness of space and the difficulties of fast travel, whatever the amazingly-coiffed Giorgio Tsoukalos (of Ancient Aliens fame) would have you believe.  But Scharf points out that it's much more likely that intelligent aliens would have instead sent out self-replicating robot drones, which not only had some level of intelligence themselves (in terms of avoiding dangers and seeking out raw materials to build new drones), but could take their time hopping from planet to planet and star system to star system.  And because they reproduce, all it would take is one or two civilizations to develop these drones, and given a few million years, you'd expect they'd spread pretty much everywhere in the galaxy.

But, of course, it doesn't seem like that has happened either.

Scharf tells us that there's another possibility than the dismal Great Filter concept, and that's something that's been nicknamed the "Silurian Hypothesis."  Here's where Doctor Who comes in, because as any good Whovian will tell you, the Silurians are a race of intelligent reptilians who were the dominant species on Earth for millions of years, but who long before humans appeared went (mostly) extinct except for a few scattered remnant populations in deep caverns. 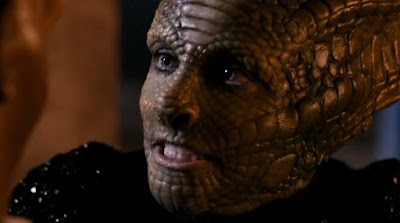 Last year, astronomers Gavin Schmidt and Adam Frank, of NASA and the University of Rochester (respectively), considered whether it was possible that an intelligent technological species like the Silurians had existed millions of years ago, and if so, what traces of it we might expect to find in the modern world.  And what Schmidt and Frank found was that if there had been a highly complex, city-building, technology-using species running the Earth, (say) fifty million years ago, what we'd find today as evidence of its existence is very likely to be...


[Astrophysicist Michael] Hart's original fact [was] that there is no evidence here on Earth today of extraterrestrial explorers...  Perhaps long, long ago aliens came and went.  A number of scientists have, over the years, discussed the possibility of looking for artifacts that might have been left behind after such visitations of our solar system.  The necessary scope of a complete search is hard to predict, but the situation on Earth alone turns out to be a bit more manageable.  In 2018 another of my colleagues, Gavin Schmidt of NASA's Goddard Institute for Space Studies, together with Adam Frank, produced a critical assessment of whether we could even tell if there had been an earlier industrial civilization on our planet.

As fantastic as it may seem, Schmidt and Frank argue -- as do most planetary scientists -- that it is actually very easy for time to erase essentially all signs of technological life on Earth.  The only real evidence after a million or more years would boil down to isotopic or chemical stratigraphic anomalies -- odd features such as synthetic molecules, plastics, or radioactive fallout.  Fossil remains and other paleontological markers are so rare and so contingent on special conditions of formation that they might not tell us anything in this case.

Indeed, modern human urbanization covers only on order of about one percent of the planetary surface, providing a very small target area for any paleontologists in the distant future.  Schmidt and Frank also conclude that nobody has yet performed the necessary experiments to look exhaustively for such nonnatural signatures on Earth.  The bottom line is, if an industrial civilization on the scale of our own had existed a few million years ago, we might not know about it.  That absolutely does not mean one existed; it indicates only that the possibility cannot be rigorously eliminated.

(If you'd like to read Schmidt and Frank's paper, it appeared in the International Journal of Astrobiology and is available here.)

It's a little humbling, isn't it?  All of the massive edifices we've created, the far-more-than Seven Wonders of the World, will very likely be gone without a trace in only a few million years.  A little more cheering is that the same will be true of all the damage we're currently doing to the global ecosystem.  It's not so surprising if you know a little geology; the current arrangement of the continents is only the most recent, and won't be the last the Earth will see.  Because of erosion and natural disasters, not to mention the rather violent clashes that occur when the continents do shift position, it stands to reason that our puny little efforts to change things won't last very long.

Entropy always wins in the end.

The whole thing puts me in mind of one of the first poems I ever read that made a significant impact on me -- Percy Bysshe Shelley's devastating "Ozymandias," which I came across when I was a freshman in high school.  It seems a fitting way to conclude this post.


I met a traveller from an antique land,
Who said—Two vast and trunkless legs of stone
Stand in the desert. . . . Near them, on the sand,
Half sunk a shattered visage lies, whose frown,
And wrinkled lip, and sneer of cold command,
Tell that its sculptor well those passions read
Which yet survive, stamped on these lifeless things,
The hand that mocked them, and the heart that fed;
And on the pedestal, these words appear:
"My name is Ozymandias, King of Kings;
Look on my Works, ye Mighty, and despair!"
Nothing beside remains. Round the decay
Of that colossal Wreck, boundless and bare
The lone and level sands stretch far away.