Searching for a lost hope

As a biologist, I know that extinction is the way of the world.  Well above 99% of the species that have ever existed on Earth have gone extinct, and in fact (given the sparseness of the fossil record) chances are most of those we don't know about and will never know about.  Extinction is simply a fact of existence.

The soft-hearted side of me, though, finds it terribly sad.

As a dedicated birder, it's heartbreaking that I will never see a Great Auk, a Carolina Parakeet, a Passenger Pigeon, or a Dodo, all of which were driven to extinction in the past three hundred years by humans.  Even the pretty little Labrador Duck, which was already in decline before humans began overhunting them and destroying their habitat -- and so was probably doomed anyhow -- looks at me with its glass-bead eyes from the museum shelves with what I can only interpret as reproach.

"Extinction is forever" has gotten to be a cliché, but there's no denying its truth.  I'm not the only one who finds it tragic, which explains the ends people will go to in order to prove particular species live on.  My wife used to work for the Cornell University Laboratory of Ornithology as a sound archivist, and she was involved (in a tangential way, she'd tell you, but enough to merit a free t-shirt) with the efforts to relocate the Ivory-billed Woodpecker, widely thought to have been extinct since the mid-1940s.  The only evidence of its continued existence was a blurry ten-second bit of video that even the wishful thinkers couldn't swear was conclusive, but it was enough to mount an expedition to the swamps of Arkansas to look for it.  And several expert birders -- who are far too knowledgeable to mistake it for the related, but much smaller (and differently-patterned) Pileated Woodpecker -- swear they got good looks at what was known as "the Lord God bird" because that's what people would shout when what looked like a black, white, and red pterodactyl flew overhead.

So hope still exists, at least for some of the species currently considered extinct.  One of the most controversial -- the thylacine, also known as the Tasmanian tiger or Tasmanian wolf -- is currently the subject of a one-man relocation effort that hit the news just this week.

Australian Neil Waters is so invested in re-finding the thylacine that he purchased a huge tract of land in northern Tasmania, and plans on devoting the next two years to the search.  Waters claims to have seen thylacines himself twice before, and points out that there's not a lot you could mistake for them: 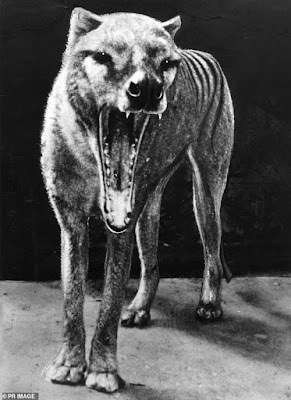 Known for their amazing "scissor" gape, the thylacine -- which, despite its two common names, is neither a wolf nor a tiger, but a marsupial like the kangaroo and the koala -- were persecuted for an alleged affinity for eating sheep, and the last known individual died in a zoo in Hobart in 1936.  Since then there has been no hard evidence of its continued existence, although if you compare the sightings reports, the thylacine beats the Ivory-billed Woodpecker hands down.  The number of alleged sightings of thylacines number in the hundreds, with dozens more coming in every year. 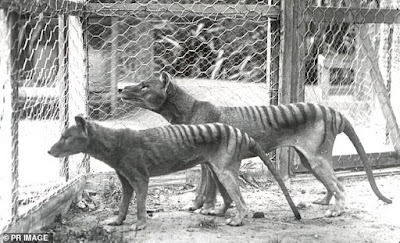 "[T]he hundreds of people who have reported sightings cannot all be wrong," Waters said.  "This is a long-term project and I am prepared to give it a couple of years – or until my finances run out.  My dream is to prove the thylacine is alive and well and have a management plan put in place to ensure their continued survival."

Another argument in favor of optimism is that it's not like seeing them was an everyday occurrence even when there was still a sizable number of them -- they were known for being shy and nocturnal.  So if there's a small population still out there, Waters reasons, it's no wonder they're seldom seen.

He adds that he's not interested in hand-waving, my-brother's-best-friend-saw-it-for-sure kind of arguments, but wants hard evidence that the experts will find unassailable.  "I have nothing to gain from faking anything," he said.  "I don't want to prove a fallacy."

The "nothing to gain" part isn't really all that accurate -- after all, he's already been featured in news media worldwide, and there are probably reality-TV shows that would love to do an episode or two on his hunt.  Not meaning to cast aspersions against him, because he certainly sounds sincere, and I really want to think that the second part -- that he doesn't want to fake evidence for a falsehood -- is the truth.

So for now I'm 100% in Waters's camp, and wish him the best of luck.  He certainly seems to be going about it the right way.  If they're still out there, there's hard evidence somewhere, and he's determined enough to have a real shot at finding it.

But part of it is wishful thinking on my part, because I really want the thylacine to still be alive.  They're cool, weird, and unique as the largest recent carnivorous marsupial.  Plus, finding it alive would mean one fewer irreversible assaults on the natural world to lay at humanity's feet -- and heaven knows, we have enough of those.