An MRI built for two

Some years ago, I injured my left knee doing martial arts, and a couple of weeks later found myself inside an MRI machine.  The technician, who would be the odds-on favorite for the least personable medical professional I've ever met, started out by telling me "strip down to your underwear" in tones that would have done a drill sergeant proud, then asking me if I had any metal items on my person.

His eyes narrowed.  "Because when I turn these magnets on, anything made of metal will be ripped from your body, along with any limbs to which they might be attached."

I decided to check a second time for metal items.

After reassuring myself I was unlikely to get my leg torn off because I had forgotten I was wearing a toe ring, or something, I got up on a stretcher, and he cinched my leg down with straps.  Then he said, "Would you like to listen to music?"

Surprised at this unexpected gentle touch, I said, "Sure."

"Something soothing.  Classical, maybe."  So he gave me some headphones, tuned the radio to a classical station, and the dulcet tones of Mozart floated across me.

Then, he turned the machine on, and it went, and I quote:

It was deafening.  The nearest thing I can compare it to is being inside a jackhammer.  It lasted a half-hour, during which time I heard not a single note of Mozart.  Hell, I doubt I'd have heard it if he'd tuned in to the Rage Against the Machine station and turned the volume up to eleven.

The upshot of it was that I had a torn meniscus, and ended up having surgery on it, and after a long and frustrating recovery period I'm now mostly back to normal.

But the MRI process still strikes me as one of those odd experiences that are entirely painless and still extremely unpleasant.  I'm not claustrophobic, but loud noises freak me out, especially when I'm wearing nothing but my boxers and have one leg tied down with straps and am being watched intently by someone who makes the T-1000 from Terminator 2 seem huggable.  I mean, call me hyper-sensitive, but there you are.

So it was rather a surprise when I found out courtesy of the journal Science that the latest thing is...

My first thought was that hospitals were trying to double their profits by processing through patients in pairs, and that I might be there getting my leg scanned while old Mrs. Hasenpfeffer was being checked for slipped discs in her neck.  But no, it turns out it's actually for a good -- and interesting -- reason, entirely unconnected with money and efficiency.

They want to see how people's brains react when they interact with each other.

Among other things, the scientists had people talk to each other, make sustained eye contact, and even tap each other on the lips, all the while watching what was happening in each of their brains and even on their faces.  This is certainly a step up from previous solo MRI studies having to do with emotional reactions; when the person is in the tube by him/herself, any kind of interpersonal interaction -- such as might be induced by looking at a photo or video clip -- is bound to be incomplete and inaccurate.

Still, I can't help but think that the circumstance of being locked into a tube, nose to nose with someone, for an hour or more is bound to create data artifacts on its own.  I mean, look at the thing: 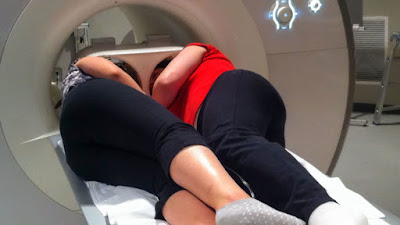 One of the hardest things for me at the men's retreat I attended in November, and about which I wrote a while back, was an exercise where we made sustained eye contact at close quarters -- so you're basically standing there, staring into a stranger's eyes, from only six inches or so away.  I'm not exactly an unfriendly person, per se, but locking gazes with a person I'd only met hours earlier was profoundly uncomfortable.

And we weren't even cinched down to a table with a rigid collar around our necks, with a noise like a demolition team echoing in our skulls.

So as much as I'm for the advancement of neuroscience, I am not volunteering for any of these studies.  I wish the researchers the best of luck, but... nope.

Especially since I wouldn't only be anxious about whether I'd removed all my metal items, I'd have to worry whether my partner had, too.  Although I do wonder what would show up on my brain MRI if I was inside a narrow tube and was suddenly smacked in the face by a detached arm.