Sometimes I think my friends are trying to kill me.

I say this because of the frequency with which they send me links to articles that cause me to headdesk so hard that I risk brain injury.  I mean, I'm sure they mean well.  I ask for submissions for topics for Skeptophilia, after all, so I bring a good bit of it upon myself.  But there are those who just seem to go above and beyond the call of duty.

Such as my friend James, who a couple of days ago sent me a link to an article over at Truth Theory called "Vibratory Quantum Theory Explained in 2,000-year-old Ancient Text."  This one was so far out in left field that it wasn't even in the same zip code as the ballpark.  In fact, it was enough beyond your average wacko-has-a-website that I thought it deserved some mention here.

Kind of a Hall of Infamy, or something.

I encourage you to read the whole thing, of course taking the precaution first of putting a pillow on your desk to pad your faceplant.  But if you'd prefer just getting a flavor of it rather than experiencing it in its entirety, I include below some excerpts, along with my responses.


Quantum physics now states that matter is merely an illusion and that everything is energy at a different frequency in vibratory motion.

This is the first sentence of the article, which is called "starting off with a bang." Quantum physics says no such thing.  Quantum physics is a mathematical description of the behavior of matter and energy on very small scales (scientists have to go to phenomenal efforts to observe quantum effects on the macroscopic scale).  Even if you strip away the math and try to come up with a layman's-terms-description of the model, you will find nothing about "everything is energy at a different frequency in vibratory motion."  I know this, you see, because I took an entire course called "Quantum Physics" when I was an undergraduate, and that phrase never came up.


In the first place, science teaches that all matter manifests, in some degree, the vibrations arising from temperature or heat.  Be an object cold or hot–both being but degrees of the same things–it manifests certain heat vibrations, and in that sense is in motion and vibration.

This is not so much wrong as it is trivial.  Yes, anything above absolute zero (i.e. everything in the universe) is in constant motion; that, in fact, is the definition of temperature (the average kinetic energy, or energy of motion, of the molecules in an object or substance).  But this motion is chaotic, not orderly and periodic, so it's not really a vibration, any more than a hundred kindergartners running around in a playground is a marching band.


And so it is with the various forms of Energy.  Science teaches that Light, Heat, Magnetism and Electricity are but forms of vibratory motion connected in some way with, and probably emanating from the Ether.

The ether (or aether) was shown to be nonexistent by the Michelson-Morley experiment, which happened in 1887.  Way to keep up with the cutting edge, dude.

Okay, gravitation is still kind of a mystery, but the other three (cohesion, molecular attraction, and chemical affinity) are all pretty well understood by anyone who has taken a high school chemistry class.  And I'll bet my next year's income that when gravitation is fully explained and incorporated into a Grand Unified Field Theory, it will turn out to have nothing whatsoever to do with "hermeticism."


When the object reaches a certain rate of vibration its molecules disintegrate, and resolve themselves into the original elements or atoms.  Then the atoms, following the Principle of Vibration, are separated into the countless corpuscles of which they are composed. And finally, even the corpuscles disappear and the object may be said to Be composed of The Ethereal Substance.

Okay, I have to admit that this passage defeated me.  I've read it three times and I still don't know what the fuck it means.

After this, he goes off into the aether (ba-dum-bum-kssh) with stuff about telepathy and the occult and whatnot, and at that point my face began to resemble this: 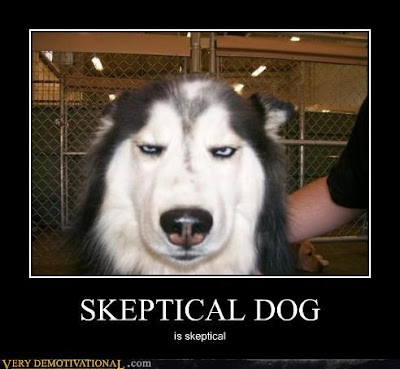 So I'll leave you to read the rest if you're so inclined, and you have a pillow handy.

In any case, thank you to James and to my other friends for their attempts to commit faceplant homicide.  I do appreciate the gesture, and let me know if there's ever anything I can do for you in return.  One good headdesk deserves another.