Hunters in the skies

Despite what you might have gathered from movies like Jurassic Park, we know very little about the behavior and appearance of prehistoric animals.

The exceptions stand out because they're so rare.  We know that Cretaceous-era hadrosaur Maiasaura nested in colonies -- because paleontologists have found entire family groups fossilized in place, with nests, eggs, and young all together at the same time.  The large ornithopod Iguanodon seems to have traveled in herds, given the 1878 discovery of 31 individuals that all died more or less simultaneously in what is now Belgium.  The Cretaceous parkosaurid Oryctodromeus apparently spent a lot of time in underground burrows judging from remains found in Montana and Idaho.

And a handful of others.  Surprisingly, one of the most iconic dinosaurs from Jurassic Park -- the Velociraptor -- has never been conclusively shown to be a pack hunter (although it may have been), and almost certainly wasn't intelligent enough to figure out how to open the latch on a walk-in freezer.

So she may not have been such a Clever Girl after all.

As far as appearance, that can be even dicier.  From complete skeletons, scientists can use the position of muscle attachment points to make a good approximation at body contour, but there are a lot of structures without bones that wouldn't fossilize at all.  Consider, for example, that a fossilized elephant skeleton would show very little evidence of a trunk -- so future paleontologists probably wouldn't know it had one, and their reconstruction would look pretty different from reality.  When feathers or hair are preserved -- itself an unlikely occurrence -- scientists can guess at color and patterns from traces of pigments left behind, as with the feathered pterosaur whose tail feathers showed clear evidence of banding.

Other than that, it's pretty much all speculation based on analogy to modern species.  So it's a fair bet that if we time-traveled back to a hundred million years ago, we'd have a hell of a lot of surprises when we saw how those critters actually behaved, what they looked like, and what they sounded like.

This is why when there's a fossil that gives us a clue about behavior, it's pretty special.  Like the one described in a paper in Scientific Reports yesterday -- a fossilized squid that had a tooth from a pterosaur embedded in it.

The 150-million-year-old fossil, found in Germany, is of a thirty-centimeter-long individual of the prehistoric squid genus Plesioteuthis, but when the scientists looked carefully at it they found something extraordinary -- there was a long tooth fragment in the mantle, which after analysis they concluded came from the pterosaur Rhamphorhynchus.  I've always loved the pterosaurs -- they're far and away my favorite prehistoric animals (yes, I have favorite prehistoric animals.  Doesn't everyone?).  They vary in size from little Sordes pilosus, with a wingspan of only 0.8 meters or so, up to the mind-bogglingly huge Quetzalcoatlus, which was as long tip-to-tail as a giraffe and had a wingspan of twelve meters -- as large as a small airplane.  (Imagine what you'd do if one of those glided overhead while you were out picnicking.)

Rhamphorhynchus was on the small end of things, with a 1.8 meter wingspan.  It was a pretty cool-looking creature (I mean, as far as we can tell) -- with a long tail ending in a diamond-shaped rudder. 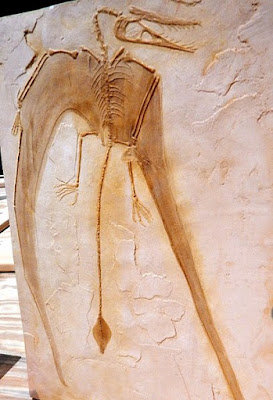 So the new fossil find gives us some interesting evidence for this beast's feeding behavior.  What it looks like is that it probably flew low over bodies of water, similar to what the remarkable birds called Black Skimmers do today, grabbing prey that ventured too near to the surface with their long, toothy beaks.  Only this time a Rhamphorhynchus lost its fight for dinner -- it might be that at thirty centimeters, the squid was too large or too heavy for it to pull out of the water -- and lost a tooth as well.  The squid went on to fight its battles for survival another day (as, probably, did the Rhamphorhynchus), only to end up as a fossil itself, still with the predator's tooth buried in its mantle.

This fascinating glimpse of how these hunters in the prehistoric skies found their prey is all the more cool for its rarity.  It's not often the remains of a long-deceased animal can give you hints about how it behaved when it was alive.  This lens into the past has allowed us to glimpse a diverse group that died out completely 66 million years ago -- flying dinosaurs that dominated the air of a long-lost world.