One of the hazards of becoming more aware of how biased and (sometimes) duplicitous popular media can be is that you finally, de facto, stop believing everything you read and hear.

It's called, of course, being a "cynic," and it's just as lazy as being gullible.  However, because the credulous are often derided as silly or ignorant, cynics sometimes feel that they must therefore be highly intelligent, and that disbelieving everything means that you're too smart to be "taken in."

In reality, cynicism is an excuse, a justification for having stopped thinking.  "The media always lies" isn't any closer to the truth than "I know it's true because I read about it online;" nor is there anything particularly smart about saying "everything you eat causes cancer" or "all of the science we're being told now could be wrong."  All it does is give you an automatic reason not to read (or not to watch your diet or not to learn science), and in the end, all of those are simply statements of willful ignorance.

Take, for example, the site Clues Forum, which has as its tagline, "Exposing Media Fakery."  In particular, consider the thread that was started quite some time ago, but which continues to circulate, lo up unto this very day... entitled "The (Non-religious) Dinosaur Hoax Question." 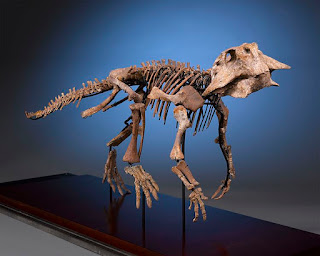 
Dinosaurs have, in recent years, become a media subject rivaling the space program in popularity and eliciting similar levels of public adoration towards its researchers and scientists. The science of dinosaurs and other prehistoric life is also directly linked to other controversial scientific topics such as evolution, fuel production, climate and even the space program (i.e., what allegedly killed them).

So right from the outset, we've jumped straight into the Motive Fallacy -- the idea that a particular individual's motive for saying something has any bearing on that statement's truth value.  Those scientists, the author says, have motives for our believing in dinosaurs.  Then we're told, at least in vague, hand-waving terms, what those motives are: supporting controversial ideas so people will look up to them, and getting us worried about the climate and the potential for cataclysmic asteroid strikes so they can get funding.  Therefore: they must be lying.  We're never told, outright, that's there's any real evidence the scientists are lying, but the seed is planted, right there in the first paragraph.

Then more reason for doubt is thrown our way when we're told that (*gasp*) scientists make mistakes.  A dinosaur skeleton found in New Jersey, and now on display at the New Jersey State Museum, was reconstructed with a skull based on an iguana, since the actual skull could not be found.  The article, though, uses the word "fake," as if the museum owners and the scientists were deliberately trying to pull the wool over people's eyes.  The truth is that they were simply interpolating the missing pieces -- something that is routinely done by paleontologists.  But the author claims it was more nefarious than that, and that those wily characters gave away the game by admitting what they were up to, right beneath a photograph of the skeleton:

So yet another hole punched in our confidence, with the revelation that (*horrors*) there are things scientists don't know.  Instead of looking at that as a future line of inquiry, this article gives you the impression that such holes in our knowledge are an indication that everything is suspect.

Last, we're told that it's likely the paleontologists are creating the fossils themselves, because fossils are just "rock in rock," leaving it a complete guessing game as to where the matrix rock ends and the fossil begins.  So for their own secret, evil reasons, paleontologists spend days and weeks out in the field, living in primitive and inhospitable conditions, grinding rocks into the shape of bones so as to hoodwink us all:


But, in our hoax-filled world of fake science, doesn't this rock-in-rock situation make it rather easy for creative interpretations of what the animal really looked like?  And, once a particular animal is “approved” by the gods of the scientific community, wouldn't all subsequent representations of that same animal have to conform with that standard?

But I've found that people like this will seldom take any of those steps.  Once you suspect everyone, there's no one to lean on but yourself -- and (by extension) on your own ignorance.  At that point, you're stuck.  So actually, there is a difference between gullibility and cynicism.