In science, there's sometimes a fine line between looking for data to support your model, and shoehorning every bit of data you can find into your model whether it belongs there or not.

Someone who has stepped over that line -- hell, he left the line behind decades ago, and probably doesn't even know where it is any more -- is British astronomer Chandra Wickramasinghe.  Wickramasinghe is best known for his research into panspermia, the idea that living things, and perhaps the ancestors of all living things on Earth, arrived here on meteorites and in interstellar dust.  He did his Ph.D. dissertation under the supervision of Fred Hoyle, whose views were also a little on the unorthodox side.  (Hoyle, for example, rejected the Big Bang in favor of the Steady-State model, which he steadfastly clung to his entire life despite there being zilch in the way of evidence in its favor.)

So Wickramasinghe was kind of set up from the beginning to be a maverick.  He and Hoyle wrote paper after paper on panspermia, ultimately ascribing an extraterrestrial origin for the pathogens responsible for the 1918-1919 "Spanish" flu, mad cow disease, polio, and SARS.  He has been involved in studies of dust collected from the upper stratosphere that tested positive for microorganisms, which he claimed was extraterrestrial in origin (of course) and turned out almost certainly not to be (of course).  A meteorite strike in Sri Lanka in 2012 was analyzed by Wickramasinghe, and he stated that the rock fragments contained "extraterrestrial diatoms" -- which were ultimately shown to be fossils of entirely terrestrial species that were contained in the sedimentary rocks where the meteorite hit.

Oh, and in the 1981 creationism/evolution "debate" in the courts of the state of Arkansas, Wickramasinghe was the only scientist to testify on the behalf of the creationists.  "Once again," he said, "the Universe gives the appearance of being biologically constructed, and on this occasion on a truly vast scale."

And, he added, the famous Archaeopteryx fossil, showing the clear link between birds and dinosaurs, is a fake. 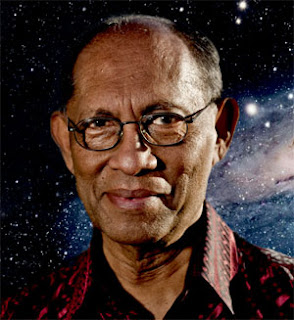 So here we have a guy who is bound and determined to bang away at the same idea forever, in spite of (or maybe because of) the complete lack of scientifically credible evidence for it.  The more embattled he becomes, the more certain he becomes.

You almost have to admire his determination.

I say "almost," because I have to admit to saying, "are you fucking kidding me?" when I ran into an article over at Mysterious Universe describing a paper Wickramasinghe submitted to the journal The Lancet a couple of weeks ago.  And in it -- which you're probably already anticipating...

... he claims that the Wuhan coronavirus came from outer space.


In the case of the current Coronavirus pandemic in China it is interesting to note that an exceptionally bright fireball event was seen on October 11 2019 over Sonjyan City in the Jilin Province of NE China.  It is tempting to speculate that this event had a crucial role to play in what is now unfolding in throughout China.  If a fragment of a loosely held carbonaceous meteorite carrying a cargo of viruses/bacteria entered the mesosphere and stratosphere at high speed ~30km/s, its inner core which survived incandescence would have got dispersed in the stratosphere and troposphere...

Following the initial deposition of infective particles in a small localized region (e.g. Wuhan, Hubei province, China) particles that have already become dispersed through over a wider area in the troposphere will fall to ground in a higgledy-piggledy manner, and this process could be extended over a typical timescale of 1-2 years until an initial inoculant of the infective agent would be drained.  This accords well with many new strains of viruses including influenza that have appeared in recent years.

Which, I have to admit, is the first time I've ever seen "higgledy-piggledy" used in a scholarly paper.

Be that as it may, the main problem I see about all this -- besides the fact that (1) meteorites hit the Earth all the time, so finding one in the vicinity of a disease outbreak isn't remarkable, and (2) there is no evidence for what he's saying other than "hey, it could be, y'know?" -- is that all of Wickramasinghe's alleged extraterrestrial microbes are closely related to bacteria and viruses that were already here, and in fact have been here for a long, long time.  Yes, the 1918-1919 flu epidemic was horrifying in its contagion rate and mortality, but the causative virus is not really all that different from other flu viruses seen before and since.  Polio has been around since ancient Egyptian times -- and even if you don't buy that the quick mentions in ancient writings were actually polio, it was unequivocally described in an autobiographical account by Sir Walter Scott of events he endured in 1773.  Mad cow disease, and its human analog Creutzfeld-Jakob Syndrome, are caused by misfolding of a protein called PrP, which (in its properly-folded state) is present the brains of every mammalian species tested, including ones that have never been hit on the head with a meteorite.

And COVID-19, as the epidemiologists have named the Wuhan coronavirus, is one of a large family of viruses that have been troubling humanity for millennia.  In fact, a good many of the cases of the common cold are due to members of the coronavirus family, so it'd be a little odd if there was an epidemic caused by a coronavirus, and that one (and its cousin SARS) turned out to be from outer space while the rest of them were here all along.

Wickramasinghe's response to all this is that since all life on Earth originated in space, it stands to reason that you'll find similarities between the ones that come crashing to Earth and the ones that were already here.  We're all aliens, he says, it's just that some of us are more recent arrivals.

Which to me is stretching credulity to the snapping point.  Ockham's Razor kicks in, here -- in the absence of any positive evidence, the (vastly) simpler theory is that all the life forms on Earth go back to a common (terrestrial) ancestor.  Yes, it's possible that the progenitor of all life forms landed here four-billion-odd years ago from an extraterrestrial source -- but that's all we can say.  It's possible.  There's no independent evidence that this happened, so at the moment, it's just a hand-waving guess, not a valid scientific theory.

But that's not going to stop Wickramasinghe, who is bound and determined to take every new development in microbiology and attribute it to an alien incursion.  I keep hoping the guy will give it a rest eventually, but he's 81 years old and showing no signs of it.  Like I said, have to kind of appreciate his tenacity, but it'd be nice if he'd turn that onto some other lines of scientific inquiry, because it gets a little tiresome to keep listening to the astronomical version of Johnny One-Note.