A visit from the death reaper

In case you needed more incentive not to take a time machine back to the Cretaceous Period, paleontologists have just discovered a new species of dinosaur from Alberta and christened it Thanatotheristes -- Greek for "the reaper of death."

Add that to the fact that it looked a bit like a cross between a toucan and a Tyrannosaurus rex, and you've got some real nightmare fuel. 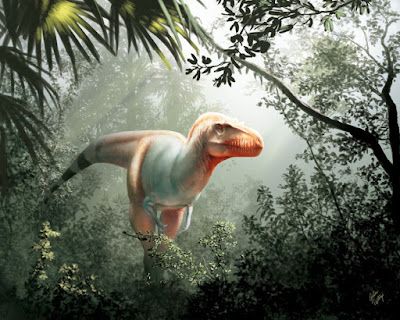 The fossils date from 79.5 million years ago, so about 14 million years (give or take) from the giant meteorite collision that would spell the end of the Age of Dinosaurs.

"It definitely would have been quite an imposing animal, roughly 2.4 meters at the hips," said study lead researcher Jared Voris, a doctoral student of paleontology at the University of Calgary in Alberta, in an interview with LiveScience.

Add to that the fact that it was eight meters from tip to tail and had seven-centimeter-long teeth that invite the inevitable comparison to steak knives, and you have a seriously badass creature.

It was found near bones of a Triceratops relative and a species of pachycephalosaurid, both herbivores, and it's a fair guess these were on the Thanatotheristes dinner menu.

It's amazing to think about what the biodiversity must have been like back then, when Alberta was a tropical forest near the equator.  For one thing, we tend to have the impression that the species we've found are all there were, so a new discovery like this is somehow a surprising addition to the menagerie.  In reality, the conditions that result in fossilization are so specific, and so rare, that it's kind of a wonder we have any fossil record at all.  Most dead animals and plants are gone with nary a trace in only a few years; the fact that these bones survived, substantially intact, for almost eighty million years is a little mindblowing.

So what that means is that the species we know about constitute only a very small percentage of the animals and plants that were alive back then.  How small a percentage is a matter of speculation.  But it's a safe bet that it's less that 0.1% -- meaning, even at a generous estimate, for every one species we have fossils of -- and therefore a sense of what it looked like -- there are 999 that we not only don't know about, we have no way of knowing about.

It is only a slight exaggeration that our current situation is like trying to draw a good picture of our current biodiversity using only the bones of a rabbit, largemouth bass, reticulated python, and hummingbird, a handful of mollusk shells, a pile of various insect exoskeletons, and some leaves.  So our ideas about the prehistoric world -- even much more recent times than the Cretaceous Period -- are no so much wrong as they are wildly, hugely incomplete.

Which they will always be, unless we develop that time machine.  And even that brings up its own set of problems, which you know all too well if you've read any science fiction.  I'm reminded of the first time I came across the idea of how fraught time travel into the past would be, when I read Ray Bradbury's brilliant, disturbing short story "The Sound of Thunder" -- where a safari into the Cretaceous Era results in catastrophe in the present despite the organizers' attempts to prevent it.

So there are a variety of reasons that it might be prudent to remain in ignorance of what critters were around back then, even if we were somehow able to.  Changing the past has drastic consequences, and if you believe science fiction stories, they're almost always bad ones.  Then there's the more direct danger of being eaten by a Toucanosaurus rex.  You can see how that would kind of suck.