I was kind of tickled, when I got my "23 & Me" results back a couple of years ago, to find out that I had 284 identified Neanderthal markers, identifying me as having more Neanderthal ancestry than 60% of the samples tested.

The reason I was happy about this is not because it gave me an explanation for why I like my steaks rare and have a general aversion to wearing clothes.  It was more because I find the Neanderthals a fascinating bunch.  Far from the low-intelligence cave trolls a lot of us picture them as -- witness the use of their name as an insult -- by the end they actually had larger brains than your average modern Homo sapiens.  They had culture; they anointed and buried their dead, seem to have had music (if the archaeologists are correct about the origin of the Divje Babe flute), and might even have had language -- they had the same variant of the FOX-P2 gene that we do, which is instrumental to our ability to understand and produce spoken language. 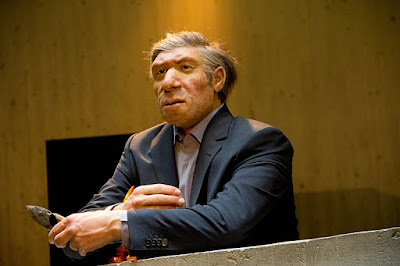 [Image licensed under the Creative Commons Clemens Vasters, Neanderthal in a business suit, CC BY 2.0]

It also wasn't terribly surprising in my own case, as Europeans generally have more Neanderthal ancestry than any other group, and my test results showed me to be -- also unsurprising, given what I know of my family tree -- nearly 100% of European origin, mainly French, Scottish, Dutch, German, and English.  The Neanderthals themselves are named after the Neander Valley of Germany, where archaeologists found the first fossils of the species (or subspecies, depending on who you believe).  So once it was determined that they had interbred with early modern Homo sapiens, their geographical distribution led to a (correct) surmise that Europeans would have more Neanderthal ancestry than other ethnic groups, for the same reason that southeast Asians and Native Australians have more Denisovan ancestry than the rest of us.

That's why a paper in Cell two weeks ago came as such a shock.  In it, a team led by Lu Chen of Princeton University found that a number of African ethnic groups, especially those in northern and western Africa, have a lot more Neanderthal ancestry than anyone realized.

Because it's still not as much as the Europeans have, and the African Neanderthal genes identified are variants usually found in Europe, the guess is that some of the European Homo sapiens/Neanderthal hybrids made their way across (or around) the Mediterranean in a "back-to-Africa" migration, injecting Neanderthal genes into groups that previously had little to no Neanderthal ancestry.

It also means that geneticists may be underestimating the number of Neanderthal markers in the rest of us.  Because those estimates were made using comparison between sample DNA and that of people thought to have no Neanderthal ancestry at all -- such as the Yoruba of Nigeria -- if those African groups did have ancestry that was the result of a back-to-Africa migration by European hybrids, then that revises the baseline upward.  The former estimates of 1.7-1.8% Neanderthal DNA for your average person of European descent might be on the low side.

"Our work highlights how humans and Neanderthals interacted for hundreds of thousands of years, with populations dispersing out of and back into Africa," said study co-author Joshua Akey in an interview with Science News.  "Remnants of Neanderthal DNA survive in every modern human population studied to date."

I find it fascinating how DNA is now being used to track relationships and migratory patterns not only of other animal species, but of humans.  And it's gotten pretty accurate.  It picked up my Ashkenazic ancestry, identifying it at 6% -- just about right based on my one great-great-grandfather, Solomon Meyer-Lévy of Dauendorf, Alsace, who emigrated from his birthplace and joined a small community of French-speaking Jews in Donaldsonville, Louisiana in around 1850.  The other interesting result in my own DNA that made sense was a smattering of Italian ancestry, undoubtedly because my father's paternal line ancestor, Jacques-Esprit Ariey-Bonnet, was born in a little town in the French Alps, quite close to the border of Italy.

So the amount we can learn about our own past from our genes is staggering, and I'm sure there are other surprises in store for us.  It informs us not only of our physical makeup but our history, a millions-of-years-long trail leading back to our most distant hominid ancestors on the savannas of Kenya and Tanzania.

Although it still doesn't explain the rare steaks and nudity thing.