The Brown Lady of Raynham Hall

One of the more curious ghost stories I've ever heard is the tale of the "Brown Lady," named after her drab clothing, who has been allegedly seen many times in Raynham Hall Manor in Norfolk, England.

I first ran across the story in a collection called 50 Great Ghost Stories by John Canning, which from the inscription inside the front cover -- "October 29, 1977 -- Mon cher ami -- mieux vaut tard que jamais -- Amélie" -- I received three days after my seventeenth birthday from a family friend.

It's a pretty cool book, although (like many of this ilk) it mixes myth and folklore with stories that actually have some historical veracity.  The tale of the Brown Lady is one of the second type, because the people involved are actual historical figures, although the evidence for the haunting itself is still a little on the sketchy side.

The facts of the case are pretty well documented.  Lady Dorothy Walpole (18 September 1686 - 29 March 1726), who was the sister of Robert Walpole, the first prime minister of England, was married to Charles Townshend, 2nd Viscount Townshend.  Townshend had been married before, to one Elizabeth Pelham, by whom he had five children; he and Dorothy Walpole had seven more, the youngest of which was the mother of Charles Cornwallis, who signed the surrender at the Siege of Yorktown and ended the American Revolutionary War.

Dorothy Walpole wasn't happy, however, partly because Charles Townshend was more interested in growing turnips (I kid you not) than in devoting himself to his wife and family, and also because supposedly he had a nasty temper, which I would too if I had to eat turnips.  Be that as it may, Dorothy Walpole Townshend sought solace elsewhere, but unfortunately for her, she chose Thomas Wharton, 1st Marquess of Wharton, as a lover.

Well, the story goes that either Townshend or Wharton's wife (the legend varies) caught Dorothy and Thomas in flagrante delicto, and Townshend decided the only proper response was to lock his wife up in Raynham Hall to prevent her from cheating on him again.  She stayed there for the rest of her life, dying in 1726 at the young age of 40, possibly of smallpox -- although if she was never allowed outside her room, you have to wonder who she caught it from.

Be that as it may, once Dorothy Walpole Townshend's sad and short life had ended, people started to report the presence of a specter haunting Raynham Hall.

The most famous of the encounters was with novelist Frederick Maryatt, who was a friend of Charles Dickens.  Maryatt's daughter, Florence, wrote in 1891 about her father's meeting with the Brown Lady :


…he took possession of the room in which the portrait of the apparition hung, and in which she had been often seen, and slept each night with a loaded revolver under his pillow.  For two days, however, he saw nothing, and the third was to be the limit of his stay.  On the third night, however, two young men (nephews of the baronet), knocked at his door as he was undressing to go to bed, and asked him to step over to their room (which was at the other end of the corridor), and give them his opinion on a new gun just arrived from London.  My father was in his shirt and trousers, but as the hour was late, and everybody had retired to rest except themselves, he prepared to accompany them as he was.  As they were leaving the room, he caught up his revolver, "in case you meet the Brown Lady," he said, laughing.  When the inspection of the gun was over, the young men in the same spirit declared they would accompany my father back again, "in case you meet the Brown Lady," they repeated, laughing also.  The three gentlemen therefore returned in company.

The corridor was long and dark, for the lights had been extinguished, but as they reached the middle of it, they saw the glimmer of a lamp coming towards them from the other end.  "One of the ladies going to visit the nurseries," whispered the young Townshends to my father.  Now the bedroom doors in that corridor faced each other, and each room had a double door with a space between, as is the case in many old-fashioned houses.  My father, as I have said, was in shirt and trousers only, and his native modesty made him feel uncomfortable, so he slipped within one of the outer doors (his friends following his example), in order to conceal himself until the lady should have passed by.

I have heard him describe how he watched her approaching nearer and nearer, through the chink of the door, until, as she was close enough for him to distinguish the colors and style of her costume, he recognised the figure as the facsimile of the portrait of "The Brown Lady."  He had his finger on the trigger of his revolver, and was about to demand it to stop and give the reason for its presence there, when the figure halted of its own accord before the door behind which he stood, and holding the lighted lamp she carried to her features, grinned in a malicious and diabolical manner at him.  This act so infuriated my father, who was anything but lamb-like in disposition, that he sprang into the corridor with a bound, and discharged the revolver right in her face.  The figure instantly disappeared - the figure at which for several minutes three men had been looking together – and the bullet passed through the outer door of the room on the opposite side of the corridor, and lodged in the panel of the inner one.  My father never attempted again to interfere with "The Brown Lady of Raynham."

Now, to be fair, Florence Maryatt isn't exactly what you might call an impartial witness.  She was heavily into spiritualism, and was the author of books with titles like There is No Death and The Spirit World.  So I'm inclined to take anything she says with a grain or two of salt.

Which, of course, I would have anyhow.

Maryatt, however, wasn't the only one to claim seeing the Brown Lady in person.  In 1936, a photographer named Hubert Provand, who worked for Country Life magazine, was taking photos of Raynham Hall for a feature article.  They were setting up for a shoot of the wide interior staircase when Provand's assistant, Indre Shira, pointed at "a vapoury form gradually assuming the appearance of a woman moving down the stairs towards us."  Provand took a photo of the apparition, which has since become one of the most famous ghost photographs ever: 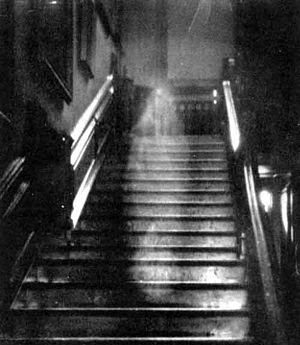 The incident was investigated by Harry Price, a noted paranormal researcher whose reputation for accepting questionable evidence led to his leaving the skeptical and science-based Society for Psychical Research, and founding his own rival organization, the National Laboratory of Psychical Research, because the obvious answer to skepticism is to start a group that will see things your way.  (One of the more famous examples of Price's dubious approach to investigation was the debacle of Borley Rectory, the "most haunted house in England," the evidence for which subsequent inquiries found was almost entirely fabrication.)

For what it's worth, which is probably not much, Price declared the Brown Lady photograph authentic, saying "the negative is entirely innocent of any kind of faking."  But like Florence Maryatt, he's not exactly the most reliable source of information.  Further analysis showed that the image is most likely a double exposure (note the pale lines above the stair treads, and the double reflections on the bannisters).  The ghost figure itself shows a lot of similarity to a traditional Madonna statue, down to a foggy impression below the face that appears to be hands folded in prayer.

Even if the photograph is a fake, of course, it doesn't mean that the other accounts aren't true.  But at the moment, the story doesn't have much to recommend it -- other than a second-hand and probably biased account, and a famous photograph that is almost certainly a fake, the Brown Lady doesn't really hold up to scrutiny.

It's still kind of a cool story, however, and I'd love to visit Raynham Hall myself.  If I ever get to go, however, allow me to reassure Dorothy Walpole Townshend that I plan on being entirely unarmed, and even if I were to bring a gun for some reason, I'd never think of shooting her in the face with it.  I mean, it's all very well to get scared in those kinds of situations, but that kind of breaches the rules of etiquette even so.