A bird in amber

Last week I mentioned the fact that since fossilization requires such precise (and uncommon) conditions, for every one prehistoric species we know about, there are thousands of others we don't.  The biodiversity of the ancient world was orders of magnitude beyond what we glean from the fossil record.

So it's always exciting when we get to add a new character to the menagerie.  Even though it's still going to be (very) far from complete, each new species found gives us a new window into a lost world.

The contribution that appeared in Nature this week is an odd one, even by comparison to some of the other weird critters we've discovered.  Called Oculudentavis khaungraae -- the genus name meaning "toothed eye-bird" and the species name in honor of Khaung Ra, the Burmese collector who donated the fossil for study -- it lived around 99 million years ago in an island arc that is now part of the country of Myanmar.  As the name would suggest, it is a bird, and in fact is closer in relationship to modern birds than the famous Archaeopteryx.

But it was a mighty peculiar bird.

First, it was tiny, about the size of the smallest known modern bird, the Bee Hummingbird, which weighs in at a whopping two grams and has an average length of six centimeters.  But Oculudentavis had teeth.  Lots of them.  From the jaw structure and tooth orientation, it seems to have been a predator, just a really tiny one -- small enough that this particular specimen died after getting tangled in tree sap, leaving its skull preserved in a drop of amber.

The paper, by a team led by Lida Xing of the Chinese Academy of Geosciences, is titled "Hummingbird-Sized Dinosaur from the Cretaceous Period of Myanmar," and provides a thorough analysis of the fossil.  The morphology of the skull is an odd amalgam of birdlike and lizard-like features, especially the bones around the eyes; modern birds have a "scleral ring," a ring of bones that support the eye, while in Oculudentavis the bones are spoon-shaped, like many lizards.

"It's the weirdest fossil I've ever been lucky enough to study," said study coauthor Jingmai O'Connor of the Chinese Academy of Sciences, in an interview with BBC News.  "I just love how natural selection ends up producing such bizarre forms.  We are also super lucky this fossil survived to be discovered 99 million years later."

Without further ado, here's an artist's reconstruction of what Oculudentavis may have looked like, courtesy of Han Zhixin: 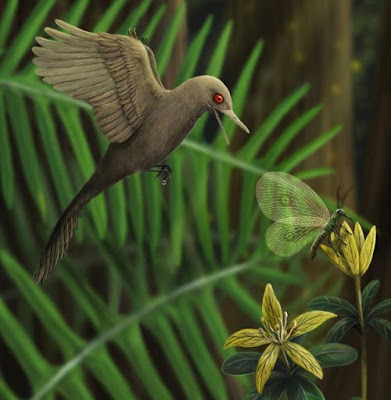 And a close-up of the face: 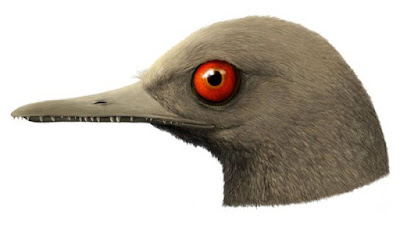 So it might have been little, but its expression says very clearly, "Do not fuck with me."

"It's lucky this tiny creature was preserved in amber, as such small, fragile animals aren't common in the fossil record," said study coauthor Luis Chiappe, of the Natural History Museum of Los Angeles County.  "This finding is exciting because it gives us a picture of the small animals that lived in a tropical forest during the age of dinosaurs."

So once again, a fortuitous discovery has given us a lens into the time of the dinosaurs, and added another branch to the evolutionary tree.  But it once again brings home how little we actually know about the distant past -- and makes me wonder what kind of surprises we'd be in for if we somehow invent a time machine and go back there.  I think what we'd find would beggar belief, and make even Charles Darwin's grand words about "endless forms most beautiful and most wonderful" seem an insufficient description.