If you own anything made of gold, take a look at it now.

I'm looking at my wedding ring, made of three narrow interlocked gold bands.   It's a little scratched up after almost eighteen years, but still shines. 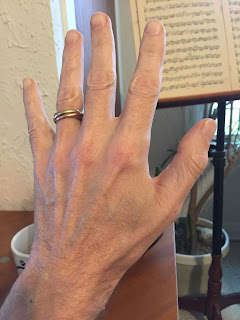 Have you ever wondered where gold comes from?  Not just "a gold mine," but before that.  If you know a little bit of physics, it's kind of weird that the periodic table doesn't end at 26.  The reason is a subtle but fascinating one, and has to do with the binding energy curve. 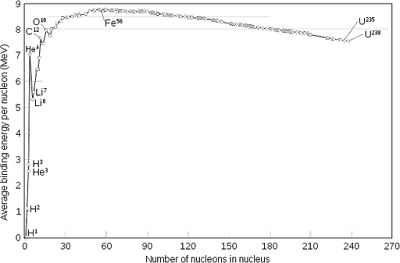 The vertical axis is a measure of how tightly the atom's nucleus is held together.  More specifically, it's the amount of energy (in millions of electron-volts) that it would take to completely disassemble the nucleus into its component protons and neutrons.  From hydrogen (atomic number = 1) up to iron (atomic number = 26), there is a relatively steady increase in binding energy.  So in that part of the graph, fusion is an energy-releasing process (moves upward on the graph) and fission is an energy-consuming process (moves downward on the graph).  This, in fact, is what powers the Sun; going from hydrogen to helium is a jump of seven million electron-volts per proton or neutron, and that energy release is what produces the light and heat that keeps us all alive.

After iron, though -- specifically after an isotope of iron, Fe-56, with 26 protons and 30 neutrons -- there's a slow downward slope in the graph.  So after iron, the situation is reversed; fusion would consume energy, and fission would release it.  This is why the fission of uranium-235 generates energy, which is how a nuclear power plant works.

It does generate a question, though.  If fusion in stars is energetically favorable, increasing stability and releasing energy, up to but not past iron -- how do the heavier elements form in the first place?  Going from iron to anywhere would require a consumption of energy, meaning those will not be spontaneous reactions.  They need a (powerful) energy driver.  And yet, some higher-atomic-number elements are quite common -- zinc, iodine, and lead come to mind.

Well, it turns out that there are two ways this can happen, and they both require a humongous energy source.  Like, one that makes the core of the Sun look like a wet firecracker.  Those are supernova explosions, and neutron star collisions.  And just last week, two astrophysicists -- Szabolcs Marka of Columbia University and Imre Bartos of the University of Florida -- found evidence that the heavy elements on the Earth were produced in a collision between two neutron stars, on the order of a hundred million years before the Solar System formed.

This is an event of staggering magnitude.  "If you look up at the sky and you see a neutron-star merger 1,000 light-years away," Marka said, "it would outshine the entire night sky."

What apparently happens is when two neutron stars -- the ridiculously dense remnants of massive stellar cores -- run into each other, it is such a high-energy event that even thermodynamically unfavorable (energy-consuming) reactions can pick up enough energy from the surroundings to occur.  Then some of the debris blasted away from the collision gets incorporated into forming stars and planets -- and here we are, with tons of lightweight elements, but a surprisingly high amount of heavier ones, too.

But how do they know it wasn't a nearby supernova?  Those are far more common in the universe than neutron star collisions.  Well, the theoretical yield of heavy elements is known for each, and the composition of the Solar System is far more consistent with a neutron star collision than with a supernova.  And as for the timing, a chunk of the heavy isotopes produced are naturally unstable, so decaying into lighter nuclei is favored (which is why heavy elements are often radioactive; the products of decay are higher on the binding energy curve than the original element was).  Since this happens at a set rate -- most often calculated as a half-life -- radioactive isotopes act like a nuclear stopwatch, analogous to the way radioisotope decay is used to calculate the ages of artifacts, fossils, and rocks.  Backtracking that stopwatch to t = 0 gives an origin of about 4.7 billion years ago, or a hundred million years before the Solar System coalesced.

So next time you look at anything made of heavier elements -- gold or silver or platinum, or (more prosaically) the zinc plating on a galvanized steel pipe -- ponder for a moment that it was formed in a catastrophically huge collision between two neutron stars, an event that released more energy in a few seconds than the Sun will produce over its entire lifetime.  Sometimes the most ordinary things have a truly extraordinary origin -- something that never fails to fascinate me.