Diamonds in the rough

Sure, diamonds are pretty and sparkly and rare and valuable, but do you know how they form?  Because that's honestly the coolest thing about them.

Diamonds are found in geological formations called kimberlite pipes.  This is a structure shaped like a long, narrow ice cream cone, extending downward into the Earth (how far downward we'll get to in a moment), and characterized by some rocks and minerals you usually don't find lying around -- chromium-rich pyrope garnets, forsterite, and various types of ultramafic (low-silica igneous) rocks that break down to a very specific kind of clay.  Jewel hunters long ago figured out that diamonds were likely to be found in association with these rocks and minerals, and used those as indicators of where to look -- such as the diamond-rich Kimberly region of South Africa (which gave its name to kimberlite), a couple of spots in Greene and Indiana Counties, Pennsylvania, and the Udachnaya area of Siberia. 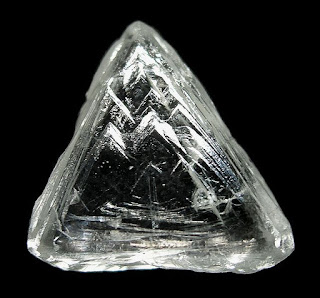 All of that's just background, though.  Here's the cool part, if (like me) you like things that are big and powerful and scary and can kill you.

Geologists discovered more or less simultaneously that the composition of kimberlite pipes is consistent with magma found in the (very) deep mantle, and that known kimberlite pipes extend a (very) long way down.  The best models indicate that the eruption that forms them starts on the order of four hundred kilometers below the surface of the Earth, making it the deepest known volcanic feature.

No one knows what triggers the eruption to begin.  It seems to be a rare occurrence, whatever it is.  Fortunately.  Because once it starts, and the magma moves upward through the mantle, the drop in pressure makes dissolved gases bubble out, rather like popping the cork off a bottle of champagne.  This speeds up the movement, which lowers the pressure more, so more gas bubbles out, and so on and so forth.  Also -- gases expand as the pressure drops, so the higher it rises, the more volume it displaces.

The result is what's called a diatreme.  What seems to happen is that with no warning, there's a Plinian eruption -- the same sort that destroyed Pompeii and Herculaneum -- but moving at supersonic speeds.  Imagine what it must look like -- from a distance, preferably -- everything is calm, then suddenly a several-kilometer-wide chunk of land gets blown up into the stratosphere.  The conical hole left behind fills with material from the deep mantle (thus its odd composition by comparison to other igneous rocks).  Give it a few million years, and weathering results in the characteristic clay found in a typical kimberlite.

So what's all this got to do with diamonds?

Well, in the intense heat and pressure of the eruption, some of the carbonate ions in minerals in the magma are reduced to elemental carbon, and that carbon is compressed to the point that its crystalline structure changes to a hexoctahedral lattice.  The result is a transparent crystal that looks nothing like the soft, black, powdery stuff we picture when we think of carbon.  (Further illustrating that bonding pattern is everything when it comes to physical properties.)

The reason all this comes up is a discovery described in a press release from the University of British Columbia that I found out because of a friend and loyal reader of Skeptophilia.  Kimberlite pipes are not only unusual, they differ from each other, so the composition of each acts as a geological fingerprint.  So when a UBC geologist named Maya Kopylova tested samples of a kimberlite on Baffin Island, she found that its composition was inconsistent with the rocks of the nearby geological province -- the nearest rocks it matched were in Labrador, almost two thousand kilometers away.

This was sufficient to identify it as part of the North American craton, a (relatively) stable piece of continental crust that currently extends from eastern Canada, through southern Greenland, and over to Scotland.  (It was torn into chunks when the Mid-Atlantic Rift Zone formed on the order of two hundred million years ago, breaking up what was the supercontinent of Pangaea.)

How a chunk of a billion-year-old craton ended up two thousand kilometers away is uncertain, but it does give us a lens into how the continents have shifted during geologic history.  "The mineral composition of other portions of the North Atlantic craton is so unique there was no mistaking it,"  Kopylova said.  "It was easy to tie the pieces together.  Adjacent ancient cratons in Northern Canada—in Northern Quebec, Northern Ontario and in Nunavut—have completely different mineralogies...  Finding these 'lost' pieces is like finding a missing piece of a puzzle.  The scientific puzzle of the ancient Earth can’t be complete without all of the pieces."

Cool, too, that the discovery was made using remnants of what is very likely to be one of the most unpredictable and violent geological events on Earth.  (Okay, the formation of igneous traps is worse.  But still, kimberlites should surely come in second.)  The universe never ceases to fascinate me, and I'm always struck by the fact that no matter how much you know, there's always more to find out.

More, too, to worry about.  Although considering the current state of affairs, a supersonic volcanic eruption might actually lighten everyone's mood.