A bolt from the blue

Two weeks ago, I wrote about a surprising fossil find in China showing that insects had rebounded after the horrific Permian-Triassic Extinction, 252 million years ago, with amazing speed considering the scale of the extinction and how slowly evolution generally goes.  An extinction opens up hundreds or thousands of ecological niches, which increases the selective pressure on the survivors to occupy them and avoid competition with the others -- which insects did, par excellence, and have been doing ever since.

The cause of the "Great Dying" has been a subject of conjecture for as long as we've known about it.  Candidates include:
We just got a new piece of the puzzle last week, from research that also took place in China at a rock outcropping called the Penglaitan Section.  This formation dates from just before and just after the Permian-Triassic Extinction, and has the advantage of being 27 meters thick -- the sediment was being deposited rapidly when it formed, which means that you can see fine gradations in composition and narrow down the time range for when things happened.  (By comparison, the previous formation used is only 30 centimeters thick.) 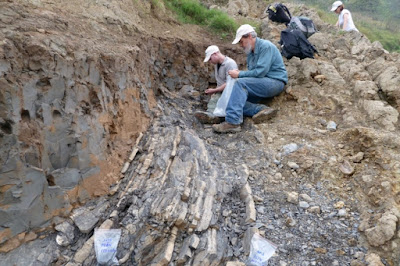 And what Penglaitan tells us is rather alarming.  The Permian-Triassic Extinction, which wiped out 95% of life on Earth and dwarfed the more familiar Cretaceous Extinction, happened in a relative flash.  And it wasn't (or wasn't solely) caused by temperature rise; the main pulse of extinctions happened suddenly, without any warning, and occurred when the temperature had only started its upward trajectory.  There was a five-degree temperature increase that occurred at the same time as the extinctions, but a much larger increase followed that, after the vast majority of the extinctions had already taken place.

Right now, the leading hypothesis is that the eruption of the Siberian Traps is the most likely cause.  But that in itself is horrific; it means that this colossal outpouring of lava not only happened suddenly, it happened with no warning.  Immediately prior to the extinction event, life was doing just fine -- the biodiversity was high, and there were no minor die-offs to presage the big one that was coming.

"We thought we would see a gradual decline in the diversity of life forms or, for example, certain species that are known to be less resilient than others, we would expect them to die out early on, but we don’t see that, said Jahandar Ramezani, of MIT's Department of Earth, Atmospheric, and Planetary Sciences.  "We can say there was extensive volcanic activity before and after the extinction, which could have caused some environmental stress and ecologic instability.  But the global ecologic collapse came with a sudden blow, and we cannot see its smoking gun in the sediments that record extinction...  The key in this paper is the abruptness of the extinction.  Any hypothesis that says the extinction was caused by gradual environmental change during the late Permian — all those slow processes, we can rule out.  It looks like a sudden punch comes in, and we’re still trying to figure out what it meant and what exactly caused it."

So that's pretty scary.  The idea that something on this scale could strike with essentially no warning whatsoever makes me realize how precarious life is, and how easily the interconnections between ecosystems that keep everything going could be disrupted -- not to mention the scale of the destruction if that happens.

Anyone out there still wondering why I'm so alarmed at the rate at which we're pouring fossil-fuel-derived carbon dioxide into the atmosphere?

Anyhow, that's our cheery message for today.  Monkey around with the ecosystem, and you could kill 95% of life on Earth.  I mean, I don't think it's likely to happen day after tomorrow, or anything, but the fragility of it all should give you pause.