The closet's a fine and private place

Yesterday I got a DM on Twitter that left me scratching my head a little.

Here's the body of it, verbatim:


I don't mean to be offensive, but why do you make such a big deal of being bisexual?  What your preferences are and who you like to go to bed with are nobody's business.  But because you and other people like you want to push it in everybody's faces, you make it our business whether we want it to be or not.

Then you complain when people are rude or discriminate, which they wouldn't have done if you didn't put it all on the front page in all caps.

Think about keeping your private matters private out of courtesy to everyone else who would rather not hear about it.

So there's a lot to unpack here in only three paragraphs.

First, I really didn't think I was "making a big deal out of being bisexual."  It's in my profile, okay. (Nota bene: it's not in all caps.)  I retweet LGBTQ awareness stuff when I see it -- maybe once or twice a day, if that.  Last week I got in a quick, lighthearted exchange with a friend about actor Tom Ellis's role in the series Lucifer, and I said that if the real Lucifer is as gorgeous as Tom Ellis, it really doesn't give me much incentive not to sin. 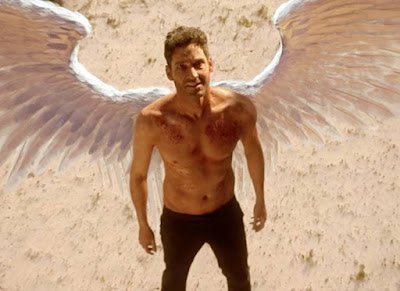 And that's kind of it.

Mostly what I get involved in on Twitter are discussions with other fiction writers, and (unfortunately) posts about politics.  So it's not like I'm waving a rainbow flag in front of people's faces.

Which brings up the question of why it would be a problem even if I was.  The subtler bit of subtext here is that the writer thinks it's fine for me to be queer as long as no one else knows.  The message is that she's only comfortable when she can pretend that people like me don't exist.  Because the assumption in our culture is you're straight unless you say otherwise, it's not that she thinks all identification by sexual orientation should be a closely-guarded secret; she's perfectly fine assuming that everyone is 100% straight, and therefore engages in the behavior associated with sexually-active 100% straight people.

But my even mentioning that there are folks who don't fall into that category is apparently a problem.  Or, more specifically, it's a problem that I'm one of them and I'm not ashamed of it.  Well, let me say this as explicitly as I can, and as politely as I can manage: that's how I lived for forty-some-odd years, after I realized I was bi when I was fifteen years old and suddenly found myself goggle-eyed over a handsome friend who took his shirt off on a hot day.  That's forty years of shame, coupled with a desperation that nobody must find out about that part of me, that the only way to live was to pretend to be someone I wasn't.

Now?  I have the 100% support of my wonderful wife, friends, and family.  My public coming-out last year spurred at least two people I know of to proudly claim their own identity (something that makes me choke up a little every time I think about it).

So re-enter that closet?  Not just no, but fuck no.

Because you know what?  Now that I'm out, I like being bi.  It gives me twice as many opportunities to openly appreciate the beauty of the human body.  It hasn't damaged my relationship with my wife; if anything, it's strengthened it.  So if you expect me to sink back down into shame and self-loathing because you're uncomfortable with the fact that I'm not uncomfortable...

So anyway.  That was how my day started yesterday, and I decided instead of getting angry, to respond publicly.  Maybe it'll open a few eyes, and if not that, at least it might shut a few mouths.