I try to avoid writing about topics I don't fully understand, because that's just too great an opportunity for my sticking my foot in my mouth (and having to write a retraction afterwards).  Because of this reluctance, and because I'm pretty up-front about it when I don't know something, I don't get caught out very often, and I'd like to keep it that way.

So I'm gonna put a disclaimer right here at the beginning of this post: today's topic is one I have only a shallow understanding of.  If you ask me for more information, I'm likely to give you a puzzled head tilt, the same look my dog gives me when I ask him questions he doesn't have a good answer to, like why he chewed up my magazine before I had a chance to read it.  And if you are an expert in this field, and I get some of the facts wrong, let me know so I can fix 'em.

Okay, that being said: have you heard of CPT symmetry?

The initials stand for "charge," "parity," and "time," and the idea goes something like this: if you take any physical process, and reverse the charges (replace particles with their antiparticles), reverse the parity (reverse everything left-to-right), and run time backwards, the two would be indistinguishable.  Such a mirror universe would proceed according to exactly the same physical laws as ours does.

(As far as I know, it would not generate the scientific result elucidated in the Lost in Space episode "The Antimatter Man," wherein the mirror universe had an evil Don West with a beard.) 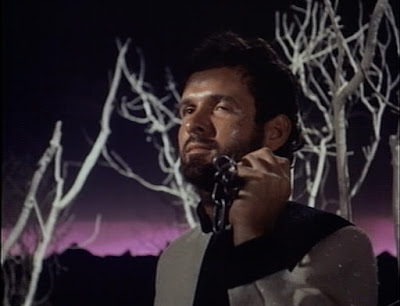 Initially, physicists thought that there was also CP symmetry -- that processes needed only charge and parity reversal to maintain symmetry, but that was found to be false when CP violations were found, most notably the decay of the particle called a neutral kaon.  The fact that symmetry is not preserved with reversal of charge and parity is thought to be the key to why there were unequal amounts of matter and antimatter produced in the Big Bang.  Fortunately for us.  If the matter/antimatter ratio had been exactly 1:1, ultimately it would all have mutually annihilated, and the universe would now be devoid of matter -- just space filled with photons zinging merrily about.

So CPT symmetry and CP violations are apparently fundamental to the nature of matter.  Which is why physicists have been pushing on the CPT symmetry idea, trying to find out if it holds -- or if there are circumstances, as there were with CP symmetry, where CPT symmetry is not preserved.

The latest test, described in a paper this week in Nature Physics, finds that even one of the oddest particles ever created in a laboratory preserves CPT symmetry.  In "Measurement of the Mass Difference and the Binding Energy of the Hypertriton and Antihypertriton," written by a team of particle researchers at the Relativistic Heavy Ion Collider at Brookhaven National Laboratory in Upton, New York, we read about bizarre particles that instead of the "up" and "down" quarks (and antiquarks) found in ordinary matter (and antimatter, if there's such a thing as "ordinary antimatter"), additionally have "strange" quarks (and antiquarks), which have higher mass and only form under extremely high energy conditions.  These particles -- the hypertritons and antihypertritons in the title -- have never had their masses calculated accurately before, and the theory is that if the masses are different, it would break CPT symmetry and require a huge rethinking of how matter works on the smallest scales.

The result?  Hypertritons and antihypertritons have exactly the same mass.  CPT symmetry -- the fact that a charge reversed, mirror-image, time-running-backwards universe would look exactly the same as ours -- is preserved.  "It is conceivable that a violation of this symmetry would have been hiding in this little corner of the universe and it would never have been discovered up to now," said study co-author Declan Keane of Kent State University.  "But CPT symmetry was upheld even in these high-energy conditions."

This discovery gives physicists a clue about what might be happening in some of the most extreme and hostile spots in the universe -- the interiors of neutron stars.  The heat and crushing pressure in the core of a neutron star is thought to have enough energy to produce strange quarks and antiquarks, and therefore if those quarks (and the particles made from them) broke CPT symmetry, it would be a lens into a place where the known laws of physics do not hold.

But the symmetrical models won out.  Also, the measured energy of the hypertriton and antihypertriton were higher than expected, which squares with known neutron star masses.  "The presence of hyperons would soften the matter inside neutron stars," said Morgane Fortin, of the Nicolaus Copernicus Astronomical Center of the Polish Academy of Sciences in Warsaw.  "Softer neutron stars would more easily collapse into black holes, so neutron stars couldn’t become as massive.  That feature makes hyperons’ potential presence difficult to reconcile with the largest neutron stars seen in the cosmos — which range up to about two solar masses.  But the newly measured, larger binding energy of the hyperon helps keep alive the idea of a hyperon-filled center to neutron stars.  The result suggests that hyperons’ interactions with neutrons and protons are stronger than previously thought. That enhanced interaction means neutron stars with hyperons are stiffer and could reach higher masses.  So neutron stars may still have strange hearts."

Strange indeed.  Mirror universes, neutron stars, and symmetry preserved to the smallest scales and highest energies.  Amazingly cool stuff, even if (1) I don't understand it all that well, and (2) it doesn't involve evil Don West with a beard.

Posted by Gordon Bonnet at 4:13 AM