Have I told you my favorite joke?

Heisenberg and Schrödinger are out for a drive, and a cop pulls them over.

The cop says to Heisenberg, who was driving, "Hey, buddy, do you know how fast you were going?"

Heisenberg says, "No, but I know exactly where I am."

Heisenberg throws his hands up in annoyance and says, "Great!  Now I'm lost."

The cop scowls and says, "Okay, if you're going to be a wiseguy, I'm gonna search your car."  So he opens the trunk, and there's a dead cat inside.

The cop says, "Did you know there's a dead cat in your trunk?"

*brief pause so you can all stop chortling*

The indeterminate nature of reality at the smallest scales always tends to make people shake their head in wonderment at how completely weird the universe is, if they don't simply disbelieve it entirely.  The Uncertainty Principle, peculiar as it sounds, is a fact.  It isn't a limitation of our measurement technique, as if you were trying to find the size of something small and had a poorly-marked ruler, so you could get a more accurate number if you found a better one.  This is something fundamental and built-in about reality.  There are pairs of measurements for which precision is mutually exclusive, such as velocity and position -- the more accurate your information is about one of them, the less you can even theoretically know about the other.

Likewise, the collapse of the wave function, which gave rise to the story of the famous (but ill-fated) cat, is an equally counterintuitive part of how reality is put together.  Outcomes of purely physical questions -- such as where a particular electron is at a given time -- are probabilities, and only become certainties when you measure them.  Again, this isn't a problem with measurement; it's not that the electron really is in a specific location, and you just don't know for sure where until you look.  Before you measure it, the electron's reality is that it's a spread-out field of probabilities.  Something about interacting with it using a measuring device makes that field of probabilities collapse into a specific location -- and no one knows exactly why.

But if you want your mind blown further -- last week in a paper in Physical Review Letters we found out how long it takes.

It turns out the wave function collapse isn't instantaneous.  In "Tracking the Dynamics of an Ideal Quantum Measurement," by a team led by Fabian Pokorny of Stockholm University, the researchers describe a set of experiments involving "nudging" a strontium atom with a laser to induce the electrons to switch orbits (i.e. making them assume a particular energy, which is one of those quantum-indeterminate things like position).  The fidelity of the measurement goes down to the millionths of a second, so the scientists were able to keep track of what happened in fantastically short time intervals.

And the more they homed in on what the electron was doing, the fuzzier things got.  The theory is that as you get down on those scales, time itself becomes blurred -- so the shorter the time interval, the less certain you are about when exactly something happened. 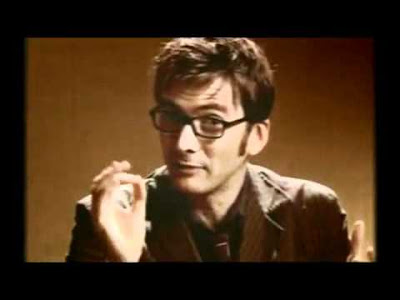 "People assume that time is a strict progression from cause to effect, but actually, from a non-linear non-subjective viewpoint, it's more of a big ball of wibbly-wobbly timey-wimey... stuff." -- The Tenth Doctor, "Blink"

I don't know about you, but I thought I had kinda sorta wrapped my brain around the quantum indeterminacy of position thing, but this just blew my mind all over again.  Even time is fuzzy?  I shouldn't be surprised; for something so damn familiar, time itself is really poorly understood.  With all of the spatial dimensions, you can move any direction you want; why is time one-way?  It's been explained using the Second Law of Thermodynamics, looking at ordered states and disordered states -- the explanation goes something like this:


Start with an ordered state, such as a hundred pennies all heads-up.  Give them a quick shake.  A few will flip, but not many.  Now you might have 83 heads and 17 tails.  There are a great many possible ways you could have 83 heads and 17 tails as long as you don't care which pennies are which.  Another shake, and it might be 74/26, a configuration that there are even more possibilities for.  And so on.  Since at each turn there are a huge number of possible disordered states and a smaller number of ordered ones, each time you perturb the system, you are much more likely to decrease orderliness than to increase it.  You might shake a 50/50 distribution of pennies and end up with all heads -- but it's so fantastically unlikely that the probability might as well be zero.  This push toward disorder gives an arrow to the direction of time.

Well, that's all well and good, but there's also the problem I wrote about last week, about physical processes being symmetrical -- there are a great many of them that are completely time-reversible.  Consider, for example, watching a ten-second clip of a single billiard ball bouncing off the side of a pool table.  Could you tell if you were watching the clip backward or forwards?  It's unlikely.  Such interactions look as sensible physically in real time or time-reversed.

So what time actually is, and why there's an arrow of time, is still a mystery.  Because we certainly feel the passage of time, don't we?  And not from any probabilistic perception of "well, I guess it's more likely time's flowing this way today because things have gotten more disorderly."  It feels completely real -- and completely fixed and invariable.

As Einstein put it, "The distinction between past, present, and future is an illusion, but it is a stubbornly persistent one."

Anyhow, that's our bizarre scientific discovery of the day.  But I better get this post finished up.  Time's a wasting.