A window on the deep past

When I was a kid, I always enjoyed going on walks with my dad.  My dad wasn't very well educated -- barely finished high school -- but was incredibly wise and had an amazing amount of solid, practical common sense.  His attitude was that God gave us reasoning ability and we had damn well better use it -- that most of the questions you run into can be solved if you just get your opinions and ego out of the way and look at them logically.

The result was that despite never having had a physics class in his life, he was brilliant at figuring things out about how the world works.  Like the mind-blowing (well, to ten-year-old kid, at least) idea he told me about because we saw a guy pounding in a fence post with a sledgehammer.

The guy was down the street from us -- maybe a hundred meters away or so -- and I noticed something weird.  The reverberating bang of the head of the sledge hitting the top of the post was out of sync with what we were seeing.  We'd see the sledge hit the post, then a moment later, bang.

I asked my dad about that.  He thought for a moment, and said, "Well, it's because it takes time for the sound to arrive.  The sound is slower than light is, so you see the hammer hit before you hear it."  He told me about how his father had taught him tell how close a thunderstorm is by counting the seconds between the lightning flash and the thunderclap, and that the time got shorter the closer it was.  He pointed at the guy pounding in the fence post, and said, "So the closer we get to him, the shorter the delay should be between seeing the hammer hit and hearing it."

Which, of course, turned out to be true.

But then, a crazy thought occurred to me.  "So... we're always hearing things in the past?"

"I suppose so," he said.  "Even if you're really close to something, it still takes some time for the sound to get to you."

Then, an even crazier thought.  "The light takes some time, too, right?  A shorter amount of time, but still some time.  So we're seeing things in the past, too?"

He shrugged.  "I guess so.  Light is always faster than sound."  Then he grinned.  "I guess that's why some people appear bright until you hear them talk."

It was some years later that I recognized the implications of this -- that the farther away something is, the further back into the past we're looking.  The Sun is far enough away that the light from it takes eight minutes and twenty seconds to get here, so you are always seeing the Sun not as it is now, but as it was, eight minutes and twenty seconds ago.  The closest star to us other than the Sun is Proxima Centauri, which is 4.3 light years away -- so here, you're looking at a star as it was 4.3 years ago.  There is, in fact, no way to know what it looks like now -- the Special Theory of Relativity showed that the speed of light is the fastest speed at which information can travel.  Any of the stars you see in the night sky might be exploding right now (not that it's likely, mind you), and not only would we have no way to know, the farther away they are, the longer it would take us to find out about it.

This goes up to some unimaginably huge distances.  Consider quasars, which are peculiar beasts to say the least.  When first discovered in the 1950s, they were such anomalies that they were nicknamed quasi-stellar radio sources mainly because no one knew what the hell they were.  Astrophysicist Hong-Yee Chiu contracted that clumsy appellation to quasar in 1964, and it stuck.

The funny thing about them was on first glance, they just looked like ordinary stars -- points of light.  Not even spectacular ones -- the brightest quasar has a magnitude just under +13, meaning it's not even visible in small telescopes.  But when the astronomers looked at the light coming from them, they found something extraordinary.

So that meant two things: (1) if Hubble's law was being applied correctly, quasars were ridiculously far away (the nearest ones estimated at about a billion light years); and (2) if they really were that far away, they were far and away the most luminous objects in the universe (an average quasar, if placed thirty light years away, would be as bright as the Sun).

But what on earth (or outside of it, actually) could generate that much energy?  And why weren't there any nearby ones?  Whatever process resulted in a quasar evidently stopped happening a billion or more years ago -- otherwise we'd see ones closer to us (and therefore, ones that had occurred more recently; remember, farther away in space, further back in time).

Speculation ran wild, mostly because the luminosities and distances were so enormous that it seemed like there must be some other explanation.  Quasars, some said, were red-shifted not because the light was being stretched not by the expansion of space, but because it was escaping a gravity well -- so maybe they weren't far away, they were simple off-the-scale massive.  Maybe they were the output-end of a stellar wormhole.  Maybe they were some kind of chain reaction of millions of supernovas all at once. 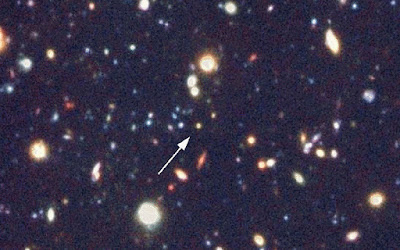 Further observations confirmed the crazy velocities, and found that they were consistent with the expansion of space -- quasars are, in fact, billions of light years away, receding from us at what in Spaceballs would definitely qualify as ludicrous speed, and therefore had a luminosity that was unlike anything else.  But what could be producing such an energy output?

The answer, it seems, is that what we're seeing is the light emitted as gas and dust makes its last suicidal plunge into a galaxy-sized black hole -- as it speeds up, friction heats it up, and it emits light on a scale that boggles the mind.  Take that energy output and drag it out as space expands, and you get the longest-wavelength light there is -- radio waves -- but produced at at a staggering intensity.

All of this comes up because of a series of six papers last week in The Astronomical Journal about a discovery of three quasars that are the most energetic ever discovered (and therefore, the most energetic objects in the known universe).  The most luminous of the three is called SDSS J1042+1646, which brings up the issue of how astrophysicists name the objects they study.  I'm sorry, but "SDSS J1042+1646" just does not capture the gravitas and magnitude of this thing.  There should be a new naming convention that will give the interested layperson an idea of the scale we're talking about here.  I propose renaming it "Abso-fucking-lutely Enormous Glowing Thing, No, Really, You Don't Even Understand How Big It Is."  Although that's a little cumbersome, I maintain that it's better than SDSS J1042+1646.

Anyhow, the energy output of this thing is 5x10^30 gigawatts.  That's five million trillion trillion gigawatts.  By comparison, your average nuclear reactor puts out one gigawatt.  Even all the stars in the Milky Way put together are a hundred times less energetic than this one quasar.

See?  I told you.  Abso-fucking-lutely enormous.

These quasars have also given astrophysicists some insight into why we don't see any close by.  They are blowing radiation -- and debris -- out of the core of the quasar at such high rates that eventually they run out of gas.  The matter loss slows down star formation, and over time a quasar transforms into an ordinary, stable galaxy.

So billions of years ago, the Milky Way was probably a quasar, and to a civilization on a planet a billion light years away, that's what it would look like now.  If you wanted your mind blown further.

The universe is a big place, and we are by comparison really tiny.  Some people don't like that, but for me, it re-emphasizes the fact that our little toils and troubles down here are minor and transitory.  The glory of what's out there will always outshine anything we do -- which is, I think, a good thing.