An apple a day

Some years ago I was chatting with a geneticist friend of mine about apples.

At that point she worked for Cornell University's Apple Genomics Project, which had as its goal studying the diversity of apple varieties out there, not only for the sake of preserving biodiversity, but also for its utility in breeding better varieties.  Toward that end, they funded a project to go to the homeland of the apple tree -- the Caucasus, Turkey, southern Russia, northern Iran, then eastward into Turkmenistan, Uzbekistan, and Kazakhstan -- and collect germ line.  In biology-speak, germ line is anything that can be used to reproduce a species.  In plants, this would be seeds (obviously), and for species that have the ability to be reproduced vegetatively, stem or root cuttings, bulbs, tubers, and so on.  In animals, fertilized eggs, or eggs and semen.  These then can be preserved (as with the astonishing Svalbard Seed Vault, hosted by Norway, now containing over twenty million seeds, including over one-third of the world's most important crop varieties), or else used to generate new individuals for crossbreeding or genetic extraction.

In the case of the apples, it was a project that was fascinating, not to mention intense.  The team went all over the apple homeland, bringing along a translator so they could speak to the people they ran into, and in each village they asked the same questions: do you have any apple trees?  If so, what do you use them for -- eating fresh, baking, cider, fermenting into an alcoholic beverage?

They returned home with hundreds of cuttings of apple trees no one in the United States had seen before.  Each had its own special qualities, whether it be taste, usefulness, or (in some cases) disease or insect resistance.  These were then sprouted or else grafted onto sapling apple trees of other varieties, and the flowers they produced cross-pollinated to other varieties to generate a new variety which -- with luck -- would have the best of the characteristics of both parents.

It was this technique that was used to develop what is clearly the best-tasting apple variety out there, the Honeycrisp.  (I know, in matters of taste, who can say what is better or worse?  The answer is: I can.  Honeycrisps are amazing, and I'm not accepting any commentary to the contrary.)  The Honeycrisp was developed at the University of Minnesota, and from genetic studies was found to be a cross between the variety "Keepsake" and an unnamed variety, MN1627, which was itself a cross between the heirloom apple variety "Duchess of Oldenburg" and the more familiar Golden Delicious.

So apple growers are always on the lookout for the Next Big Thing, and are always eager to find more varieties that might have characteristics lacking in the ones currently available.  This is why a recent study by the Washington State-based Lost Apple Project generated a lot of stir with the announcement that they had rediscovered ten different heirloom apple varieties in the United States that were thought to be extinct. 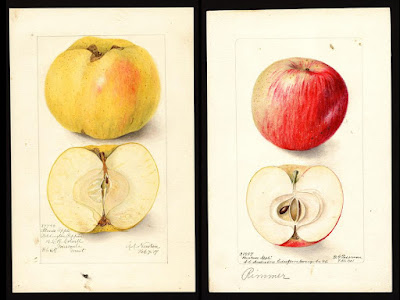 Using old nursery sales records, information about county fairs, property records, and newspaper clippings, volunteers identified abandoned orchards in Idaho and Washington, then spoke to current landowners for both information and permission.  Once the latter was granted, the team took germ line and fruit samples from every variety they could find, and were astonished to find that ten of them represented varieties growers hadn't seen for years.  "It was just one heck of a season," said Lost Apple Project volunteer E. J. Brandt.  "It was almost unbelievable.  If we had found one apple or two apples a year in the past, we thought we were doing good.  But we were getting one after another after another... I don’t know how we’re going to keep up with that."

So now we have living samples of the Gold Ridge and Butter Sweet apples, the Sary Sinap (native to Turkey), and the Streaked Pippin, which was recorded in New York as early as 1744, among others.

Me, I'm just curious as to what they all taste like.  The diversity of apple varieties is astonishing, and we're still discovering new ones (or, in this case, rediscovering old ones).  And that's despite the fact that apples aren't even native to North America, despite what "American as apple pie" would have you believe.  It makes me wonder what else is out there, not just in apples but in other fruits, flowers, trees, domestic animals...

Truly, what we have around us is exactly what Darwin's evocative words described -- "endless forms most beautiful and most wonderful."