I am not superstitious -- something that regular readers of Skeptophilia would hardly need pointed out -- but sometimes I think the universe is trying to send me a message.

I got on Facebook yesterday morning, and found that a friend of mine had posted, "I can't wait until the pandemic is over, so we can go back to doing absolutely nothing about climate change."  I gave that a rueful chuckle, and then decided to buckle down and get to work finding a topic for today's post.  I headed over to the Reddit page /r/science, often a good place to start when trying to find links to recent academic papers, and within five minutes found no less than five references that apply directly to climate change.

First, we have a press release over at EurekAlert, the science news site of the American Association for the Advancement of Science, which looked at an event in the Earth's distant past.  At the boundary between the Ordovician and Silurian Periods, about 444 million years ago, there was a massive die-off that ranks among the "Big Five" extinction events.  It's not one that most people know about, however -- not only was it a long time ago, it's eclipsed by the more famous Permian-Triassic Extinction (that by some estimates eradicated 95% of all the species on Earth) and the Cretaceous Extinction, that wrote Finis: Exeunt on the Age of the Dinosaurs.

The Ordovician/Silurian Extinction has been a bit of a mystery.  Not only are good geological strata from that long ago uncommon, it was unclear from what geologists did have what it all meant.  There was pretty good evidence of rapid seesawing between hot temperatures and massive glaciation, but what kicked it off? 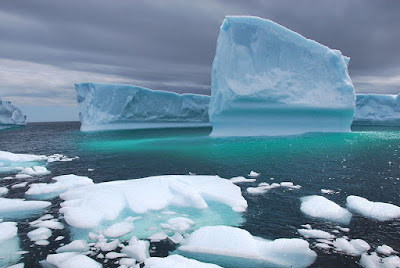 We now have at least a partial answer to that.  The cause seems to have been worldwide oceanic anoxia.  At that point, all life was marine; so when the ocean's oxygen level crashed, it was catastrophic.  From the chemistry of the sedimentary rocks of the period, it looks as if a huge volume of marine water had essentially no dissolved oxygen.

"Thanks to this model, we can confidently say a long and profound global anoxic event is linked to the second pulse of mass extinction in the Late Ordovician," said study co-author Erik Sperling of Stanford University.  "For most ocean life, the Hirnantian-Rhuddanian boundary [between the end of the Ordovician and the beginning of the Silurian] was indeed a really bad time to be alive."

If the relevance of this study to our situation today isn't apparent, the press release wallops you over the head with it:

Beyond deepening understandings of ancient mass extinction events, the findings have relevance for today: Global climate change is contributing to declining oxygen levels in the open ocean and coastal waters, a process that likely spells doom for a variety of species.

Then there's the press release from McGill University about another extinction event, the one that happened at the boundary between the Triassic and Jurassic Periods, 201 million years ago.  This one was also a bit of a mystery, but now the researchers have a smoking gun.  Guess what it is?

Changes in the atmosphere.

Here, massive volcanic eruptions (okay, "massive" isn't sufficient; "fucking huge" comes close) occurred as the Central Atlantic Rift Zone opened up, which was eventually to push apart Europe and Africa from North and South America, creating the Atlantic Ocean.  But this research indicates that the initial eruption happened over only five hundred years, and spewed out 100,000 cubic kilometers of lava.

What the problem was, other than for anything in the way of the lava flows, was the carbon emissions.  Not only does lava itself usually contain dissolved carbon dioxide that is released upon eruption, there's all the carbon generated by the lava burning up plants and other organic material.  The amount of carbon pumped into the atmosphere by this event was said by the press release to "be equivalent to the [predicted] total produced by all human activity during the 21st century."

When I got to this sentence, I said, and I quote, "What?"  The amount of carbon released by human activity in the 21st century is predicted to be equal to the amount generated by a 100,000 cubic kilometer lava flow, only five times faster?

At this point, I said some other stuff, which I won't include because I've already said "fucking" twice in this post.

Now, on to the ones that apply directly to our situation here and now.

First, a study out of the University of Sydney of estuaries, the points where freshwater rivers run into oceans.  These are biologically productive areas, homes to not only abundant sea life but fisheries industries that support coastal economies.  What this study found is that the water in estuaries is warming at twice the rate of the rest of the world's oceans -- which could be catastrophic.  In the words of the press release:


The researchers say that changes in estuarine temperature, acidity and salinity are likely to reduce the global profitability of aquaculture and wild fisheries.  Global aquaculture is worth $US243.5 billion a year and wild fisheries, much of which occurs in estuaries, is worth $US152 billion.  More than 55 million people globally rely on these industries for income.

Be aware, too, that this temperature increase is not a prediction.  It's already happened.  "This is evidence that climate change has arrived in Australia; it is not a projection based on modelling, but empirical data from more than a decade of investigation," said Elliot Scanes, who co-authored the paper, which appeared this week in Nature Communications.  "This increase in temperature is an order of magnitude faster than predicted by global ocean and atmospheric models."

Last, there are two studies, both in the journal Nature.  One focused on projections of biodiversity loss in Africa and predicted that the crash was set to happen a lot sooner in the tropics than initially thought, and that the losses would be significantly impacting economies in the 2030s.   Like, ten years from now.  And it's not as if we here in the Frozen North will be spared; the same models predicted this devastation to spread to temperate ecosystems by 2050.  The final study modeled the economic impact of the current target of keeping the global average temperature increase between 1.5 and 2 C over the next eighty years.  I'd like to quote directly from this one, because paraphrasing just wouldn't have the same impact:


Results show that following the current emissions reduction efforts, the whole world would experience a washout of benefit, amounting to almost 126.68–616.12 trillion dollars until 2100 compared to 1.5 °C or well below 2 °C commensurate action.  If countries are even unable to implement their current NDCs, the whole world would lose more benefit, almost 149.78–791.98 trillion dollars until 2100.

The authors of this study call keeping the warming threshold below 1.5 C "a matter of simple self-preservation."

Five studies, all basically with the same message: when this happened in the past, the consequences were horrifying; it's happening now; and we damn well better get up off our asses and do something about it.  Not that this is likely with Emperor Donald the Demented in charge, not to mention his corporate-boot-licking yes-men and women in Congress.

The most frustrating thing for me about all of this is that we've known about all this for ages.  Thirty years ago, Irish science historian James Burke released his amazing two-part documentary After the Warming, which was prescient in so many ways that it beggars belief.  But these lines always have stood out to me:   "Where they [are getting] it really wrong is the argument over whether the greenhouse effect is happening [now]... which is irrelevant.  The question is what to do about the fact that scientific opinion thought that it would strike sooner or later.  Still, for some people, that wasn't good enough reason to spend money preparing for the eventuality, even though they paid to insure their lives, their homes, and their national defense against much less likely events."

So it's an open question if we'll do anything now, given our abysmal track record of taking the information we already have and acting on it.  I'm hoping that the information campaigns to bring this to the attention of the public, both by humble bloggers like myself and the scientific experts who know the most, are waking people up, even if only a few at a time.

My only fear is that a few at a time won't be enough to stave off catastrophe.