Scattered to the winds

One of the more puzzling aspects of evolutionary theory is the phenomenon of peripheral isolates.

This term refers to widely-separated populations of seemingly closely-related organisms.  One of the first times I ran into this phenomenon came to my attention because of my obsession with birdwatching.  There's a tropical family of birds called trogons, forest-dwelling fruit-eaters that are prized by birdwatchers for their brilliant colors.  There are trogons in three places in the world... Central and South America (27 species), central Africa (3 species), and southern Asia (11 species).

These are very far apart.  But take a look at three representatives from each group -- it doesn't take an ornithologist to see that they've got to be closely related: 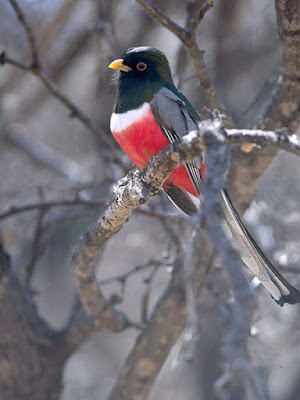 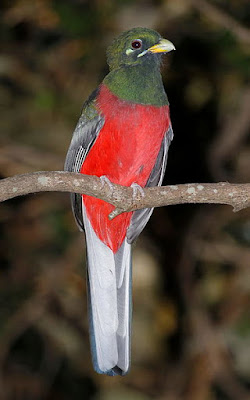 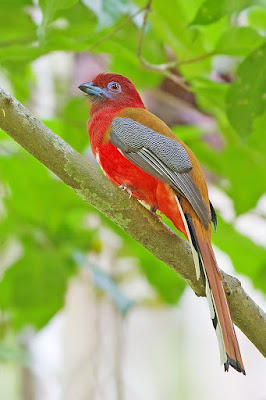 I know, I just had a post this week about how misleading morphology/appearance can be in determining relationships, but you have to admit these are some pretty convincing similarities.

The question, of course, is how did this happen?  Where did the group originate, and how did members end up so widely separated?  To add to the puzzle, the fossil record for the group indicates that in the Eocene Epoch, fifty-ish million years ago, there were trogons in Europe -- fossils have been found in Denmark and Germany -- and the earliest fossil trogons from South America come from the Pleistocene Epoch, only two million years ago.

So are these the remnants of what was a much larger and more widespread group, whose northern members perhaps succumbed due to one of the ice ages?  Did they start in one of their homelands and move from there?

And if that's true, why are there no examples of trogons from all the places in between?

Another example of this is the order of mammals we belong to (Primata).  Primates pretty clearly originated in Africa and spread from there; the earliest clear primates were in the Paleocene Epoch, on the order of sixty million years ago, but the ancestor of all primates was probably at least twenty million years before that, preceding the Cretaceous Extinction by fourteen million years.  From their start in east Africa they seem to have spread both east and west, reaching southeast Asia around fifty million years ago.  Some of the earliest members to split were the lorises and tarsiers that I wrote about on Tuesday, along with the lemurs of Madagascar.

But the next group to diverge -- and the reason the whole topic of peripheral isolates came up -- are the "New World monkeys," the "platyrhines" of Central and South America.  It looks like this split happened during the Oligocene Epoch, around thirty million years ago... but how?

At that point, Africa was separated from South America by nine hundred miles of ocean -- narrower than the Atlantic is today, but still a formidable barrier.  But a paper in Science this week describes recently-discovered evidence from Peru of some fossilized primate teeth from right around the time the New World/Old World monkey split happened.

What this discovery suggests is staggering; all of the New World monkeys, from the spider monkey to the black howler monkey to the Amazonian pygmy marmoset, are descended from a single group that survived a crossing of the Atlantic, probably on a vegetation raft torn loose in a storm, only a little over thirty million years ago.

"This is a completely unique discovery," said Erik Seiffert, the study's lead author and Professor of Clinical Integrative Anatomical Sciences at Keck School of Medicine of the University of Southern California, in an interview with Science Daily.  "We're suggesting that this group might have made it over to South America right around what we call the Eocene-Oligocene Boundary, a time period between two geological epochs, when the Antarctic ice sheet started to build up and the sea level fell.  That might have played a role in making it a bit easier for these primates to actually get across the Atlantic Ocean."

So here we have a possible explanation for one of the long-standing puzzles of evolutionary biology.  Note that these puzzles aren't a weakness of the theory; saying "we still have some things left to explain" isn't the same as saying "the theory can't explain this."  There will always be pieces to add and odd bits of data to account for, but I have 100% confidence that the evolutionary model is up to the task.

Now, I wish it could just come with an explanation for the trogons, because for some reason that really bothers me.