One of the arguments you'll hear from cryptid enthusiasts is that the various critters they claim are real are survivals.  Nessie, Mokele-Mbémbé, and the Bunyip are modern-day brachiosaurs or plesiosaurs.  Bigfoot, the Fouke Monster, the Almas, the Florida Skunk Ape, and the Yowie are hominids, possibly australopithecenes.  The Beasts of Bodmin Moor and Exmoor, and the Mngwa of Tanzania, are related to prehistoric cats.  Mothman is supposed to be... okay, I don't know what the fuck Mothman is supposed to be.  Maybe descended from the rare saber-toothed butterfly, I dunno.

[Nota bene: if you're curious about any of these and want more information, check out the excellent cryptid list on Wikipedia, which has these and many others, along with lots of highly amusing illustrations thereof.]

The possibility of prehistoric survival is not without precedent.  The most famous is the coelacanth, one of the bizarre lobe-finned fish found in fossil form in sediments from before the Cretaceous Extinction, 66-odd million years ago.  They were allied to the lineage that led to amphibians (although that split took place a lot longer ago, so they weren't direct ancestors), and had lobe-like proto-limbs that give the group their name.  They were thought to be long extinct -- until a fisherman off the coast of Madagascar caught one in 1938.

Even that iconic mammal of prehistory, the woolly mammoth, survived a lot longer than most people thought.  The last remnant populations were thought to have been in northern North America and Siberia on the order of 25,000 years ago -- until fossils were found on Wrangell Island, off the coast of Alaska, dating to around 3,800 years ago, making them contemporaneous with the building of the Great Pyramids of Egypt.

So it's always risky to date a bunch of fossils and conclude that the most recent one marks the end of the species.  Not only is fossilization uncommon (something I've touched upon before), but there can be small remnant populations left in out-of-the-way places, and our inferences about when species became extinct can be off.

Sometimes by a lot.  Take, for example, Elasmotherium, which was the subject of a paper in The American Journal of Applied Sciences that a friend and loyal reader of Skeptophilia sent me last week.  Elasmotherium has sometimes been nicknamed "the Siberian Unicorn," which is a little misleading, because the only similarities between it and the typical graceful, fleet-footed concept of the unicorn is that it had one horn and four legs.  Here's an artist's rendition of Elasmotherium: 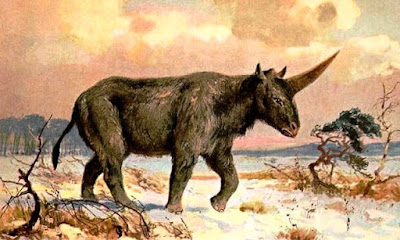 [Image is in the Public Domain, courtesy of artist Heinrich Harder]

If your thought is that it looks more like a rhinoceros than a one-horned horse, you're correct; the elasmotheres are cousins to the modern African rhinos.  What's interesting about them is that they were around during the Pleistocene, reaching their peak during the repeated glaciations, and were thought to have died out as the climate warmed, on the order of 350,000 years ago -- but this study found fossils from Kozhamzhar in Kazakhstan that dated to around 26,000 years ago.

"Most likely, the south of Western Siberia was a refugium, where this rhino persevered the longest in comparison with the rest of its range," said Andrey Shpanski, a paleontologist at Tomsk State University, who co-authored the paper.  "There is another possibility that it could migrate and dwell for a while in the more southern areas."

So it's a good bet that the elasmotheres -- like the woolly mammoth -- persisted a lot longer than paleontologists realized.

This is the main reason why, despite my general skepticism, I'm hesitant to discount reports of cryptids out of hand.  That most of them are either hoaxes or else misidentification of perfectly ordinary modern animals seems pretty likely, but "most" doesn't mean "all."  I'm very much in agreement on this count with what astronomer Michio Kaku said about UFOs: "Perhaps 98% of sightings can be dismissed as fabrications or as perfectly natural phenomena.  But that still leaves 2% that are unaccounted for, and to me, that 2% is well worth investigating."

So I'm all for continuing to consider claims of cryptids, as long as we evaluate them based upon the touchstone for all scientific research: hard evidence.  It's entirely possible some animals thought previously to be extinct have survived in remote areas, and have given rise to what we now call cryptozoology.  If that's the case, though, it should be accessible to the tools of science -- and, truthfully, just be zoology, no "crypto" about it.

Except for Mothman.  That mofo is scary.  I'd just as soon that one stays in the realm of legend, thank you very much.