Following hard on the heels of Saturday's post, which started with a description of the cassowary -- Australia's killer bird -- today we follow up with a paper in Nature Communications just yesterday that falls under the "You think things are bad now?" department.

It's not like modern Australian wildlife is anything to trifle with.  The country is where you can find some of the world's most dangerous snakes, including the taipan, the brown snake, and the tiger snake.  The north coast is home to the enormous and aggressive saltwater crocodile, while the south coast has a sizable population of great white sharks.  The eastern coast, not to be outdone, is where you can run into the harmless-looking box jellyfish, which is in contention for winner of the most-potent venom contest; it injects its victim with a substance that has an LD-50 of 0.04 milligrams per kilogram of body weight, and can kill in under five minutes if an antidote isn't administered.  Even the plants bear watching.  The north coast has the beach spinifex grass, which reinforces the pointed tips of its leaves with silica drawn from the soil, essentially turning the plant into a cluster of tiny glass shards.  Worst of all is the gympie-gympie, which is like the humongous nettle from hell, inflicting an excruciating sting that can last for years.

(The Wikipedia article I linked says that the fruit of the gympie-gympie is "edible if the stinging hairs are removed first."  To which I respond, "Do I look like a fucking lunatic to you?"  I'll stick with fruit that's not attempting to murder me, thanks.)

But the paper "Extinction of Eastern Sahul Megafauna Coincides with Sustained Environmental Deterioration," by a team led by Scott Hocknull of the University of Melbourne, gives you a good feeling for how much worse it could be.  It describes a treasure-trove of fossils from Walker Creek in northeastern Australia that had the remains of hitherto-unknown species of fauna, including: 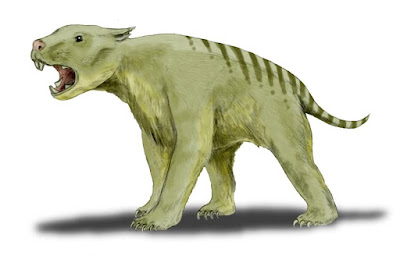 The kicker is that these things were around after the colonization of Australia by humans, and in fact, by some estimates there was a fifteen thousand year overlap where the ancestors of today's Native Australians had to contend with a nightmarish megafauna.  Me, I wonder why they stuck around, you know?  If I was one of them, and landed in my boat on the shores of Australia, and saw land crocodiles and six-meter-long lizards and a lion-sized Tasmanian devil, I would have used the words of the inimitable Eric Cartman: "Screw you guys, I'm goin' home."

Of course, home was Papua-New Guinea, which honestly wasn't all that much better.

It's an interesting question as to what finally did in these formidable critters.  Hocknull et al. write the following, in an article in The Conversation:


Why did these megafauna become extinct?  It has been argued that the extinctions were due to over-hunting by humans, and occurred shortly after people arrived in Australia.

However, this theory is not supported by our finding that a diverse collection of these ancient giants still survived 40,000 years ago, after humans had spread around the continent.

The extinctions of these tropical megafauna occurred sometime after our youngest fossil site formed, around 40,000 years ago.  The timeframe of their disappearance coincided with sustained regional changes in available water and vegetation, as well as increased fire frequency.  This combination of factors may have proven fatal to the giant land and aquatic species.

As magnificent as these creatures undoubtedly were, it's probably better that they're gone.  I've heard Australia is a pretty cool place, even considering its dangerous flora and fauna, but if the animals of Walker Creek were still around, it'd be hard to understand how anyone could manage to live there.  Just taking a short walk to the grocery store would be risking getting dismembered by enormous carnivorous marsupials.

Makes today's snakes and crocodiles and whatnot seem tame by comparison, doesn't it?