Look at that shine!

There's this bird called the cassowary, have you heard of it?

I think a better name for it would be the "Giant Blue-headed Australian Death Turkey."  They're ungainly-looking things, but (1) they're big, and (2) they're fast.  An adult GBADT can be two meters tall and weight 55 kilograms.  Not only that, but if they feel threatened, they don't run or fly away as any normal species of bird would do.  No, this is Australia.  What they do is run toward people, jump up, and kick them with razor-sharp talons, attempting -- sometimes successfully -- to disembowel them.

Think I'm joking?  This is an actual (i.e. un-Photoshopped) photograph of a guy trying to avoid being killed by a furious cassowary. 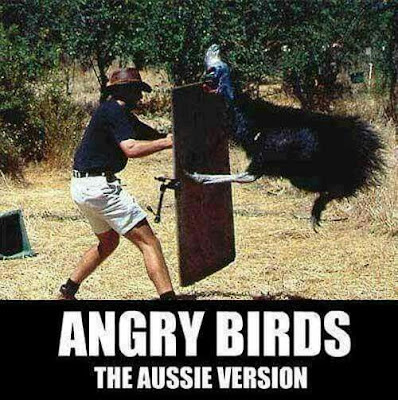 The reason this comes up is that cassowaries have another strange feature besides being, essentially, emus with daggers strapped to their feet.  Their black feathers have the quality of iridescence -- something you might not notice if it was leaping at you -- but from a safe distance, their feathers have an oily rainbow sheen.

This is more than just simple pigmentation.  The structures in the feathers containing the black pigment are called melanosomes, and they come in a variety of shapes and sizes in different species.  The brightly-colored throat patches ("gorgets") in hummingbirds are the color they are because of melanosomes.

But if the pigment they contain is black, how do hummingbirds display their amazing array of colors, and how do cassowaries gain their sheen?

The reason is a phenomenon called optical interference, and has to do with the multiple clear layers of keratin that separate the layers of melanosomes.  Light passing through those clear layers is refracted, and crosses light waves refracted by other layers -- and because of this, some wavelengths of light undergo destructive interference (they cancel each other out) and others constructive interference (they reinforce each other).  In our local Ruby-throated Hummingbirds, the keratin layers are spaced so the wavelengths that reinforce are ones that our eyes see as being in the red region of the spectrum; other colors get cancelled out.  Thus, the ruby throat of the Ruby-throat.

But change the spacing of the layers, and you change what colors reinforce.  So you can get the Violet-tailed Sylph of Ecuador... 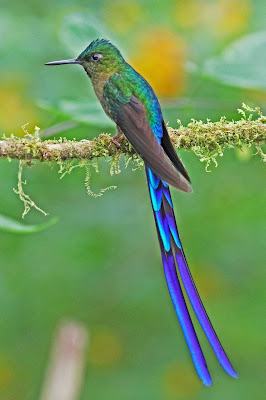 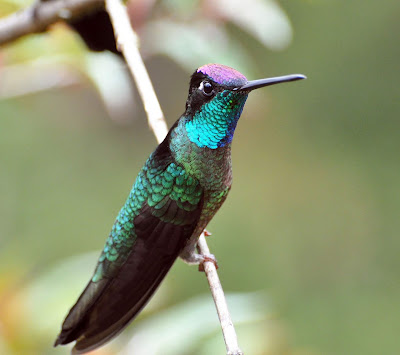 What's fascinating about this evolutionarily is that cassowaries and hummingbirds have been separate lineages for a long time.  Their last common ancestor is estimated at eighty million years ago, so predating the extinction of the non-avian dinosaurs by a good fourteen million years.  And some birds don't have this kind of iridescence -- their feather colors come from ordinary pigments, not a lot different than different colors of paint.  So how did two widely-separated groups of birds end up landing on the same solution for being colorful?

It's a very striking example of convergent evolution, where different organisms end up becoming superficially similar (usually only on one or two traits) because of similar selective pressures.  And apparently the innovation came about a long time ago in both lineages, as I found out in a paper this week in Science Advances that details information about some fossil feathers from relatives of the cassowary that were around 52 million years ago, during the Eocene Epoch.

In "Cassowary Gloss and a Novel Form of Structural Color in Birds," by Chad Eliason and Julia Clarke of the University of Texas - Austin, we read about an incredibly detailed analysis of feather fossils from the Green River Formation in Wyoming.  Using an electron microscope, the authors were able to measure the spacing of the melanosome layers and keratin layers, and determined that the species the feathers came from -- the lithornithid Calxavis (or Calciavis) grandei -- was black, with a deep iridescence on the wings.

The idea that we could actually find out what color an extinct species was using its fossilized feathers is amazing.  When I look at "artist's reconstructions" of prehistoric animals, I have to remind myself constantly that all the colors are just guesses based on analogies (sometimes incorrect ones) to modern species.  But now we actually have a pretty good idea of what a bird looked like who last flew around fifty-some-odd million years ago, which is kind of mind-boggling.

You have to wonder what other characteristics Calxavis shared with its modern cousins.  Unfortunately, we still know next to nothing about the behavior of long-extinct animals, so more than likely we'll never have anything more than guesses about how it acted when it was alive.

Who knows, maybe it even rushed at prehistoric predators and tried to rip them apart with its talons.  I mean, the Giant Blue-headed Australian Death Turkey's bad attitude has to come from somewhere.