Second verse, same as the first

One of many brilliant moments in the movie Jurassic Park is when the main characters realize that the cloned dinosaurs -- which were supposed to be sterile -- had reproduced, and Ian Malcolm has this slow smile cross his face, and says, "Life finds a way."

It's amazing how resilient life can be.  I got a wonderful reminder of this from my friend, writer and blogger Andrew Butters (whose awesome blog Potato Chip Math should have way more followers), who just a couple of days ago sent me a story about bird evolution I'd never heard of before.

Let's start with the "evolution" part first.  Ever heard of iterative evolution?  I hadn't.  It is the tendency -- apparently documented in a number of lineages -- where two separate closely-related lineages develop exactly the same adaptation independently.  If you're thinking, "Wait, isn't that convergent evolution?" you've got the gist, but there's a difference; convergent evolution is when two relatively unrelated species end up evolving similar features because of being under the same kinds of selective pressures.  The two then end up looking similar for one or two obvious traits, but in other respects they are still completely different species.  (If you want some examples with photographs, I dealt with this here only a month ago.)

Iterative evolution, on the other hand, occurs within a clade of already closely-related populations, and distinctive features evolve more than once, generating what may as well be the same species twice.  The suspicion is this occurs because of mutations in regulatory genes, where interfering in embryonic development results in the same change no matter where exactly the mutation occurred.

As implausible as this sounds, it's not at all unlikely if the two mutations in question are both losses of function, where the mutation causes a gene to switch off.  As a rather rough analogy, consider a car's engine.  Two completely separate mutations -- say, undoing the battery cables and removing the fuel pump -- will both result in the car not starting, even though the underlying cause is entirely different.

Which brings us to the Aldabra rail (Dryolimnas cuvieri subsp. aldabranus), a flightless bird native to Aldabra Island in the Seychelles.  It's the only extant species of flightless bird in the Indian Ocean.  Flying is an energy-wasteful activity if it's not conferring some significant benefits to the bird, so in the absence of predators, it's selected against.  That comes to a screeching halt, however, when predators are introduced to the habitat -- which on various islands across the world have included rats, cats, brown tree snakes... and humans.  The result is that flightless species have taken a huge hit worldwide.

But the Aldabra rail has survived somehow, and a recent paper has demonstrated that the flight-capable parent species, the white-throated rail, which is found on various islands including Madagascar, has on Aldabra evolved flightlessness at least twice. 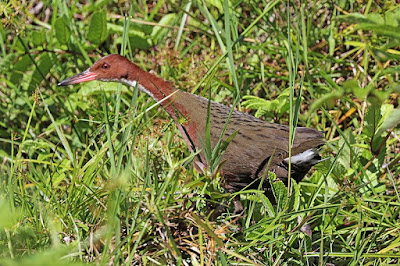 In "Repeated Evolution of Flightlessness in Dryolimnas Rails (Aves: Rallidae) After Extinction and Recolonization on Aldabra," which appeared in the Zoological Journal of the Linnean Society, by Julian Hume (of the Natural History Museum at Tring) and David Martill (of the University of Portsmouth), we read about incontrovertible evidence that the flightless subspecies evolved again after the first population was wiped out.


The Aldabra rail, Dryolimnas cuvieri subsp. aldabranus, endemic to the Aldabra Atoll, Seychelles, is the last surviving flightless bird in the Indian Ocean.  Aldabra has undergone at least one major, total inundation event during an Upper Pleistocene (Tarantian age) sea-level high-stand, resulting in the loss of all terrestrial fauna.  A flightless Dryolimnas has been identified from two temporally separated Aldabran fossil localities, deposited before and after the inundation event, providing irrefutable evidence that a member of Rallidae colonized the atoll, most likely from Madagascar, and became flightless independently on each occasion.  Fossil evidence presented here is unique for Rallidae and epitomizes the ability of birds from this clade to successfully colonize isolated islands and evolve flightlessness on multiple occasions.

This inevitably brings up the question of whether the two populations -- before and after the Pleistocene inundation -- are the same species.  This is a harder question than it sounds.  First, and most superficially, since the canonical definition of species is "a group of morphologically similar individuals all of which are capable of interbreeding and producing fertile offspring," it's impossible to tell if these are the members of the same species because the pre-inundation birds are all dead.  But it's not even as simple as that, because when you look closely, you find that species is in contention for being the mushiest definition in all of science.  There are scads of nearly-identical populations that can't interbreed, very different looking-ones that can, and ones that show a continuum of types between two extremes, making the question of "where do you draw the line?" a real problem.  (I dealt with this here a long time ago, if you're curious.)

So whether they're the same species or not is probably a meaningless question, a bit like drawing an arbitrary line on the ground and then arguing about why something falls on one side of the line or the other.  But the phenomenon itself is fascinating; that two virtually identical populations could evolve twice in the same place is kind of amazing.  It's almost as if when the first population was destroyed, Mother Nature said, "No, we need some flightless rails here," and the flight-capable parent species recolonized the island and evolved flightlessness a second time.

[Nota bene: no, I don't actually believe Mother Nature guides evolution in some kind of conscious fashion.  So don't yell at me, I was just being flippant.  Evolution is completely non-goal-oriented; it's the law of whatever works at the time.  So for the benefit of the serious and literal-minded readers, I should probably go back and rewrite the preceding paragraph, but I'm not gonna because I still think it's funny.]

Anyhow, this is a pretty cool example of a process that until now I had honestly never heard of.  It does reassure me that life will indeed find a way despite the idiotic and self-destructive things we're currently doing to the Earth's biodiversity.  We might be long gone by then, victims of our own short-sighted greed, but evolution will afterwards continue to do its thing -- producing a new set of endless forms most beautiful and most wonderful, to quote Darwin.

Some of which, beyond all expectation, may look a great deal like the ones that vanished.  And I find that a comforting thought.