The stories the bones tell

The field of forensic anthropology has made amazing strides in the past decades.  Fifty years ago, about all we could count on was identification of gender and suspected ethnic origin, and an estimate of age at death.  Now we are able to use data from bones to reconstruct much of the person's life history.

And sometimes, that history is pretty unpleasant.

One of the first cases in which the entire arsenal of sophisticated analytical techniques was used was "Ötzi," the "Ice Man" of the Alps whose body had been hidden underneath the edge of a glacier in the Italian/Austrian Alps for over five thousand years.  What we now know about Ötzi and his origins is kind of mind-blowing.  From pollen grains found in his clothing, we know he died in early summer, but his last meal contains "einkorn" wheat and sloes, both of which are harvested in the fall -- leading to the conclusion that his people knew how to preserve food over the winter.  He had no less than 61 tattoos, all geometrical and presumably symbolic, perhaps representing magical rituals.  (Or maybe, like me, he had ink just because he thought it was cool.)  He had a copper knife and particles of copper residue in his hair, suggesting he or someone he lived very near was involved in copper smelting.  From an isotopic analysis of his tooth enamel, we even know a bit of his life history -- he appears to have spent his childhood near the present town of Feldthurns, Italy, but at some point in his youth went to a valley fifty kilometers farther north.

Things took a grim turn, however, when the forensic anthropologists started looking into how he died.  Initially it was suspected he'd died in a fall down the hillside, as he had cracked ribs and surface bruises -- possibly resulting in his being knocked unconscious and dying of exposure.  But the truth seems a good bit harsher.  Ötzi has an arrowhead lodged in his upper chest, near the upper lobe of his left lung.  This wasn't an old injury; his shirt had a tear at the same place as the entry wound.  The conclusion from the placement and apparent trajectory of the arrow is that it would have severed arteries in his left pectoral muscle, leading to his death from blood loss.

We humans have been doing bad things to each other for a very, very long time.

If you needed further proof of this, consider the paper in Current Biology that came out two days ago, sent to me by a friend and loyal reader of Skeptophilia, and the reason I've gone into this rather morbid subject today.  In "Origin and Health Status of First-Generation Africans from Early Colonial Mexico," by a team led by Rodrigo Barquera of the Department of Archaeogenetics of the Max Planck Institute for the Science of Human History, we hear about three sixteenth-century skeletons recently found in Mexico that tell a horrific tale of abduction, slavery, and abuse. 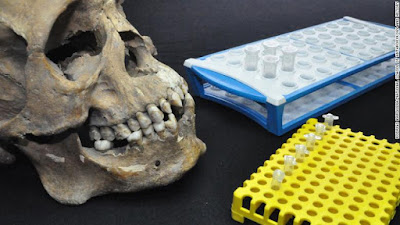 The three individuals are clearly of African origin, based not only on skeletal morphology but on tooth-filing patterns that are characteristic of the Fang people of Equatorial Guinea, Cameroon, and Gabon.  Not only that, but one of them had a characteristically African strain of hepatitis B, and another had remnants of the bacteria species (Treponema pallidum ssp. pertinue) that causes the horrific tropical disease yaws (if you choose to investigate further into this disease, do not look at the photographs unless you have a strong stomach -- you have been warned), which is most common in west and central Africa.  In fact, the current presence of yaws in Latin America is almost certainly the result of its having been brought in by the African slave trade.

It only gets worse when you read about the evidence of abuse these skeletons show.  The authors write:


Osteological analyses of the three individuals reveal evidence suggesting a life experience of conflict and hardship.  Individual ML8 SL 150 (SJN001) was found with five buck shots and two healing needles (used in traditional medicine) in the thoracic cavity, as well as gunshot wounds.  Both SJN001 and SJN003 (ML8 SLU9B 296) presented porotic hyperostosis and cribra orbitalia, two pathological changes associated with a skeletal response to nutritionally inadequate diets, anemia, parasitic infectious diseases, and blood loss.  Individual ML8 San José 214 (SJN002) displayed several skeletal changes associated with intense labor and heavy manual activity, including enthesopathies on the clavicle and scapulae as well as osteophytic lipping on the joint surfaces with some additional joint contour deformation at the sternoclavicular joint of the clavicle.  Additionally, he suffered from a poorly aligned complete fracture in the right fibula and tibia, resulting in associated joint changes of the knee, including osteochondritis dissecans of the distal femoral surface with joint contour deformation and associated osteophytic lipping of the articular surface margin.  Furthermore, this individual displayed osteoarthrosis of the lumbar vertebrae in addition to signs of deficient oral health and cut marks on the frontal bone.

"All of us involved in the study were highly touched by the whole story about these three persons, everything that they went through," study lead author Barquera said.  "Knowing that they were first-generation enslaved Africans brings a new perspective on the whole subject because you know they were abducted.  You're seeing all these maltreatment signatures on the bones that came with this abduction, what they suffered for the rest of their lives."

And "the rest of their lives" turned out to be short.  All three of the individuals died in their early or mid-twenties.  Whether they died of disease, malnutrition, murder, or the cumulative abuse they'd suffered isn't known, because they show signs consistent with all possible combinations of the above.

All of it brings home once again the accuracy of Thomas Hobbes's words in his book Leviathan, wherein he characterizes the lives of our ancestors as having been "solitary, poor, nasty, brutish, and short."  It's true that a lot of the poorness and nastiness was circumstantial, and due to bad diet and the prevalence of (then-untreatable) diseases.

But a frightening piece of the "nasty, brutish, and short" part was due to the horrible mistreatment of humans by other humans, often for no better reason than territory, power, rivalries, and tribalism.  I wish I could tell you we've grown beyond all that.  I mean, there's been progress; I wouldn't trade my life here in the 21st century for what Ötzi or the owners of the Mexican skeletons endured.  But that insularity, suspicion, and tribalism is deep within our cultural genes, needing little more than a moment's adversity to bring it to the surface.

Bringing to mind another quote, this one from the Latin playwright Plautus -- Homo lupus homini est (man is a wolf to men).

Which, in my opinion, is slanderous toward the wolves.  They may be fierce, but I've yet to see a wolf enslave another wolf.  On the whole, their society seems a great deal more peaceable than ours is.