As I have mentioned more than once, there's pretty good evidence lately that the aliens who are in charge of the computer simulation we're all trapped in have gotten bored and/or stoned, and now they're just fucking with us.

For example, consider Dr. Stella Immanuel.  Dr. Immanuel has recently become a darling of the pro-Trump faction for her claims that she's cured people with active COVID-19 infections through a combination of hydroxychloroquine, Zithromax (the antibiotic in the "Z-Pak"), and zinc.  She was one of the leading voices at a "summit" hosted by a group calling itself "America's Frontline Doctors," which I have to admit has more gravitas than the more accurate "America's Batshit Conspiracy Theorists."  The misinformation flew at the "summit," including not only that COVID-19 was curable using hydroxychloroquine (multiple studies have found it to have no positive effects on the course of the illness, and a plethora of nasty side effects, some of which can be fatal), but that the pandemic itself was overblown and that masks aren't necessary to prevent its spread.

Trump, of course, loves Dr. Immanuel, because her message is identical to the one he's been pushing for months.  He tweeted a link to a video of Dr. Immanuel defending her coronavirus misinformation, and Donald Jr. retweeted it, calling it a "Must watch!!!"  Then the powers-that-be at both Twitter and Facebook, showing a rare burst of ethical behavior, deleted her video, tagged tweets promoting it as "containing misinformation," and most surprising of all, locked Donald Jr.'s Twitter account for twelve hours. 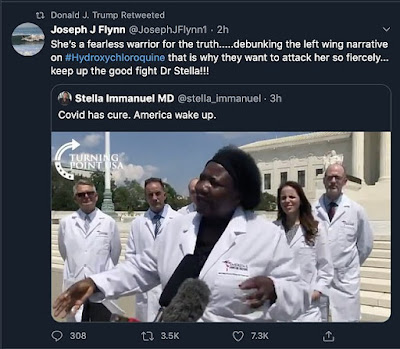 Dr. Immanuel, though, follows Trump's model in more than just espousing ridiculous pseudoscience; her personal motto is apparently "Death before admitting error."  After her video was taken down, she and Trump both doubled down on her position.  Dr. Immanuel threatened divine intervention, saying that Jesus Christ would destroy Facebook's servers if the video wasn't restored.  (They didn't, and he didn't.)  Trump, on the other hand, took a more mundane approach, if not substantially more sane.  "I can tell you this, she was on air along with many other doctors," he said.  "They were big fans of hydroxychloroquine and I thought she was very impressive in the sense that from where she came, I don't know which country she comes from, but she said that she's had tremendous success with hundreds of different patients, and I thought her voice was an important voice, but I know nothing about her."

The bizarre ideas of this "important voice" go far beyond misinformation about COVID-19, however.  Dr. Immanuel is a veritable fountain of loony beliefs, which include the following:

So this is the person that Donald Trump called "spectacular" and "very respected."

Then others took up the outcry.  Jenny Beth Martin, co-founder of the Tea Party Patriots, said that because Dr. Immanuel and Donald Trump were saying the same thing, she was being "attacked, ridiculed, and discredited" in a deliberate effort to damage Trump's reputation.  (Not, apparently, because what she was saying was certifiable horseshit.)  Simone Gold, one of the leaders of America's Frontline Doctors, said that social media was committing a crime by "censoring Physicians from speaking about COVID-19 and Hydroxychloroquine."  Radio host Mark Levin criticized several media outlets, such as The Daily Beast, for being part of a "vicious smear machine" -- because they'd quoted Dr. Immanuel verbatim.

Here we have a person who in a sane world would be looked at as a wacko, more to be pitied than censured, but because Donald Trump says he likes her, Trump-supporters nationwide suddenly act as if she's the next Jonas Salk.  (Oh, and simultaneously, they cast Dr. Anthony Fauci -- one of the world's experts in communicable disease research -- as a fool at best and an evil mastermind at worst, for saying such things as "wear a mask in public" and "don't take medications that don't work and can also kill you.")

So that's the upside-down world we currently live in.  I'd like to tell you that things will sort themselves out and that wiser and saner heads will ultimately prevail, but if there's one thing I've learned in the past four years, it's that predicting what will happen next is a loser's game.  I even tried asking the best source I have, hoping to get some clarity, desperately seeking a reason to believe that things will improve soon.

But all it would say is "Reply hazy, try again."