Water is one of those things that seems ordinary until you start looking into it.

The subject always puts me in mind of the deeply poignant Doctor Who episode "The Waters of Mars," which has to be in my top five favorite episodes ever.  (If you haven't seen it, you definitely need to, even if you're not a fanatical Whovian like I am -- but be ready for the three-boxes-of-kleenex ending.)  Without giving you any spoilers, let's just say that the Mars colonists shouldn't have decided to use thawed water from glaciers for their drinking supply.

Once things start going sideways, the Doctor warns the captain of the mission, Adelaide Brooke, that trying to fight what's happening is a losing battle, and says it in a truly shiver-inducing way: "Water is patient, Adelaide.  Water just waits.  Wears down the cliff tops, the mountains.  The whole of the world.  Water always wins." 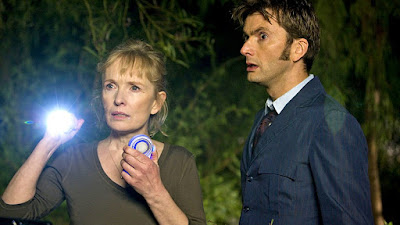 Even beyond science fiction, water has some bizarre properties.  It's one of the only substances that gets less dense when you freeze it -- if water was like 99% of the compounds in the world, ice would sink, and lakes and oceans would freeze from the bottom up.  Compared to most other liquids, it has a sky-high specific heat (ability to absorb heat energy without much increase in temperature) and heat of vaporization (the heat energy required for it to evaporate), both of which act not only to allow our body temperature easier to regulate, it makes climates near bodies of water warmer in winter and cooler in summer than it otherwise would be.  It's cohesive, which is the key to how water can be transported a hundred meters up the trunk of a redwood tree, and is also why a bellyflop hurts like a mofo.  It's highly polar -- the molecules have a negatively-charged side and a positively-charged side -- making it an outstanding solvent for other polar compounds (and indirectly leading to several of the other properties I've mentioned).

And those are the characteristics water has at ordinary temperatures and pressures.  If you start changing either or both of these, things get weirder still.  In fact, the whole reason the topic comes up is because of a paper in Astrophysical Journal Letters this week called "Irradiated Ocean Planets Bridge Super-Earth and Sub-Neptune Populations," by astrophysicist Olivier Mousis of Aix-Marseille University, about a very strange class of planets where water is in a bizarre state where it's not quite a liquid and not quite a gas.

This state is called being supercritical -- where a fluid can seep through solids like a gas but dissolve materials like a liquid.  For water, the critical point is about 340 C and a pressure 217 times the average atmospheric pressure at sea level -- so nothing you'll run into under ordinary circumstances.  This weird fluid has a density about a third that of liquid water at room temperature -- way more dense than your typical gas and way less than your typical liquid.

Mousis et al. have found that some of the "sub-Neptune" exoplanets that have been discovered recently are close enough to their parent stars to have a rocky core surrounded by supercritical water and a steam-bath upper atmosphere -- truly a strange new kind of world even the science fiction writers don't seem to have anticipated.  One of these exoplanets -- K2 18b, which orbits a red dwarf star about 110 light years from Earth -- fits the bill perfectly, and in fact mass and diameter measurements suggest it could be made up of as much as 37% water.

So there you are -- some strange features of a substance we all think we know.  Odd stuff, water, however familiar it is.  Even if you don't count the extraterrestrial contaminants that Captain Brooke and her crew had to contend with.