One of the wonderful things about writing this blog every day is that it means I'm constantly learning stuff myself.
Today's topic is a good example, and kind of a curious one because it touches on three topics about which I usually credit myself with knowing a good deal, and those are geology, paleontology, and ornithology.  But because of my buddy and twin-separated-at-birth Andrew Butters, whose wonderful blog Potato Chip Math you should definitely subscribe to, I ended up learning some really cool stuff about three subjects near and dear to my heart.
The link Andrew sent me led me to a paper in Proceedings of the Royal Society called "Ancient Crested Penguin Constrains Timing of Recruitment into Seabird Hotspot," which analyzes some three-million-year-old (Pliocene Epoch) penguin fossils found on the North Island.  Careful study of these fossils, of a species called Eudyptes atatu, led the researchers to the conclusion that penguins in general might have their origins not in Antarctica, as you might imagine (I know I did), but in the "lost continent" of Zealandia.
(If I can indulge a fourth interest, linguistics, the scientific name Eudyptes atatu comes from Greek and Maori roots, respectively, and means "good diver from the dawn of time."  Which I think is a pretty awesome name.)
Anyhow, I don't know about you, but I'd never heard of Zealandia.  The article Andrew sent (from the site Science Alert) said that Zealandia was a former continent that basically sank.  This sounded a little suspicious to me; Atlantis notwithstanding, continents don't sink.  The edges can be more or less covered with water depending on the extent of polar ice and the sea level, but pieces of continental crust (being thick and relatively cold) just get carried along by whatever plate they're sitting on.  So they can move, split, and join, sort of like a big free-floating game of Tetris with irregularly-shaped pieces and no rules.  But you don't make much new continental crust, and what you've got pretty much is what you're stuck with.  (The Laurentian Highlands of Québec and Ontario, for example, has been around since Precambrian times, dating back 540 million years.)
So the idea of a continent (or most of it) sinking seemed pretty far-fetched to me.  But that, apparently, is exactly what happened. 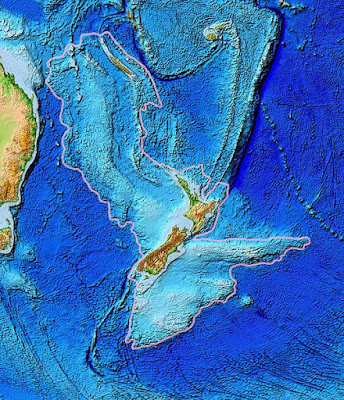 A map (courtesy of NOAA) showing the former extent of Zealandia, outlined in pink
Zealandia used to be a lush rainforest -- think New Guinea or Borneo -- but subsidence gradually reduced its size, till by the beginning of the Miocene Epoch 23 million years ago, all that remained above sea level were New Zealand and New Caledonia, and the other 93% of it lay beneath the waves.  This greatly increased the distance to the nearest land mass (Australia) and effectively isolated New Zealand entirely, which is why it has such a unique flora and fauna today.
The other continent that Zealandia used to be near was Antarctica, and from their homeland of Zealandia they colonized the (at the time much closer) southern continent, which then slid away because of plate tectonics, moving to its present position near the South Pole and taking the penguins with it.
But the fossils of Eudyptes atatu strongly point to a New Zealand origin for penguins in general, even though the only ones that have survived there to modern times are the Fiordland Penguin (Eudyptes pachyrhynchus), the Erect-crested Penguin (Eudyptes sclateri), the Snares Penguin (Eudyptes robustus), the Yellow-eyed Penguin (Megadyptes antipodes), and the Little Penguin (Eudyptula minor).  (You can see from the scientific names that the first three are in the same genus as the fossil species; whether they are descendants, or only cousins, isn't known.)
So that was today's opportunity to learn something about geology, paleontology, and ornithology.  Thanks again to Andrew for alerting me to the research, which I had somehow missed entirely.  Fun stuff, not least because it involves penguins, which are some of the most adorable birds in the world, if I may be allowed to interject a completely non-scientific opinion into the mix.