The strange tale of Christopher Round

When I was maybe twelve years old, the highlight of school was getting the monthly Scholastic Books sale flier.

It had dozens of books, at prices that seem ridiculous by today's standards -- on the order of $0.99 for a paperback.  Even back then, I loved scary stories, and it's through Scholastic that I got my first copies of collections of stories by H. P. Lovecraft and Edgar Allen Poe.

Back then, in 1972, I saw a book in one month's flier I just had to get.  It was called Haunted Houses, by Bernhardt. J. Hurwood, and at that point was a new release.  When it arrived a few weeks later, I read it eagerly, simultaneously scaring the absolute shit out of myself and running for the first time into such classic tales as the canine ghosts of Ballechin House, the screaming skulls of Calgarth, and the weirdly open-ended story of Nurse Black.

There was one story in the collection, though, that struck me as more sad than frightening.  It was titled "The Tragic Ghost of Cambridge University," and made enough of an impression that when I bumped into a reference to it yesterday on a website called "Ghosts that Haunt Seven Cambridge Colleges and the Stories Behind Them," I recognized it immediately -- and went to dig up my copy of Haunted Houses (yes, I still have it) that I hadn't looked at for something like thirty years or more.

It tells the tale of an academic fellow named Christopher Round, who was pursuing a degree in classics at Christ's College.  He was brilliant but shy -- one of those sorts whom you barely notice until he says something, and then it turns out to be perceptive and interesting, much to your surprise.  This was why his classmate Philip Collier -- similar to Round in intellect, but outgoing, genial, and strikingly handsome -- outshone Round in just about every way you can imagine. 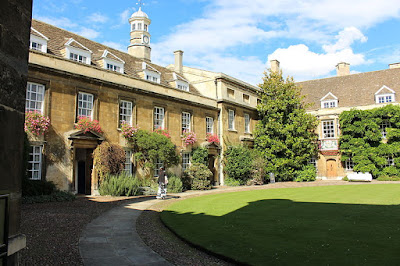 No one else in their class was even close to the same caliber, but when it came to a competition, Round always came in second.  Even after graduation (both with honors -- but guess who got first place?), the rivalry continued, because both of them were accepted as Fellows of Christ's College.

Both applied for a professorship in Greek.  Once again, Collier won, and Round was forgotten.

All through this, their interactions were at least superficially friendly.  Round wasn't the combative type in any case, and it's doubtful that Collier even realized the damage he was doing.  From the outside, it looked like a perfectly ordinary relationship -- outgoing guy and his quiet, second-fiddle sidekick.

The final straw came when Round fell in love with a woman named Mary Clifford.  Mary was high society, and beautiful, and for a time it looked like things were at last going to turn in poor Christopher Round's favor.  But fate had other plans in store.  Mary's parents took her on a trip to Italy, and while traveling she bumped into a fellow Brit who was on holiday...

When she returned, she reluctantly told Christopher Round that she'd fallen madly in love with his rival, and in fact, had accepted a proposal of marriage.  Round was devastated, but his habit of making light of his anger and jealousy once again triumphed.  He forced a smile and wished Mary well.  Relieved that he'd taken it so easily, Mary went her way, feeling like disaster had been averted.

But only a few weeks later, Round was walking back to his flat past the Fellows' Swimming Pool when he heard a noise.  Coming from the other direction was Philip Collier -- staggering drunk.  As he watched, Collier stumbled and fell in.  Although a good swimmer while sober, Collier was flailing, and reflexively Round looked for some way to help him.  There was a long wooden pole with a hook on the end lying along the hedge, used for catching things out or pushing them along the surface of the pool, and he picked it up, intending to hook Collier's clothing and help him out.

Then he thought, "Why should I do this?"  And before he could stop himself, he struck Philip Collier in the temple with the hook, and watched as his rival sank beneath the water and drowned.

Round expected to shine now that the man who had eclipsed him his entire adult life was dead, but it didn't happen.  Instead, he was consumed with remorse.  Mary Clifford, for her part, didn't go running back to him; it's uncertain if she was so sunk in grief herself that she couldn't think of romance, or if she perhaps suspected Round's role in Collier's death.  No legal investigation was ever launched.  Collier's death was ruled as accidental, so there was no worry about a hangman's noose looming in the future.

But Christopher Round was never to be the same.  He threw himself into academics, but even without Collier there to outshine him, he was not able to stand out.  He lived the rest of his life in obscurity, and his role in his rival's death only became known because he wrote out a full confession, with instructions that it was only to be unsealed fifty years after his death.

But his sad, remorseful ghost still haunts Christ's College, especially the grassy lawn by the swimming pool where Philip Collier died.  To this day, students see his stoop-shouldered figure at night, dressed in nineteenth-century garb, walking heavily along the pool, and finally disappearing without trace behind the yew hedge.

Good story, isn't it?  It's a staple in the "true tales of hauntings in Britain" books and websites, often alongside the more famous tales I alluded to at the beginning of this.

But there's just one thing more you might want to know.

I'm not saying this because I'm being my usual snarky, skeptical self.  The tale of Christopher Round and Philip Collier is the subject of a novel called A College Mystery by Alfred Ponsford Baker, published in 1918, and there is no indication anywhere in the book that Baker thought it was a true story.  Worse still, for those who want it to be real, is the fact that there doesn't seem to be a mention of the story anywhere before the publication of Baker's book.  And a thorough scouring of Christ's College records from the eighteenth and nineteenth centuries shows no one named Christopher Round or Philip Collier, not only as Fellows (which surely would have been recorded -- especially Collier, who supposedly was appointed as Professor of Greek) but even as students.

So what is conveniently left out of the account in Hurwood's Haunted Houses -- and just about every other recounting of the story of Christopher Round -- is that the whole thing comes from a work of fiction.

It's funny how the urban legend tendency works, isn't it?  Something that might have started as an up-front made-up story that no one really takes seriously grows through accretion and somehow gains the veneer of veracity.  And once that happens -- once it's told somewhere as a True Tale of the Supernatural -- few people even think to check into the story's antecedents and see if it holds any water.

Just as well.  Christopher Round's sad, ill-fated, and ultimately tortured life is better off as a fictional tale, and even the murder victim Collier doesn't come off as very praiseworthy.  Makes a good story, though -- even if the whole thing seems to have sprung from the mind of a British novelist.

**********************************
Author Mary Roach has a knack for picking intriguing topics.  She's written books on death (Stiff), the afterlife (Spook), sex (Bonk), and war (Grunt), each one brimming with well-researched facts, interviews with experts, and her signature sparkling humor.
In this week's Skeptophilia book-of-the-week, Packing for Mars: The Curious Science of Life in Space, Roach takes us away from the sleek, idealized world of Star Trek and Star Wars, and looks at what it would really be like to take a long voyage from our own planet.  Along the way she looks at the psychological effects of being in a small spacecraft with a few other people for months or years, not to mention such practical concerns as zero-g toilets, how to keep your muscles from atrophying, and whether it would actually be fun to engage in weightless sex.
Roach's books are all wonderful, and Packing for Mars is no exception.  If, like me, you've always had a secret desire to be an astronaut, this book will give you an idea of what you'd be in for on a long interplanetary voyage.
[Note: if you purchase this book using the image/link below, part of the proceeds goes to support Skeptophilia!]

Posted by Gordon Bonnet at 7:49 AM