A lens on the past

We have an unfortunate tendency to idealize the past.

Well, unfortunate is probably the wrong word.  I don't guess it does any real harm, and in fiction it can be quite entertaining.  Unrealistic is probably a better choice.  Except for the (very) select privileged few, our ancestors' lives were -- to quote Thomas Hobbes -- "solitary, nasty, poor, brutish, and short."

This idealization creates a picture in our minds that is almost certainly false.  Consider, for example, Jean Auel's Clan of the Cave Bear series, which focuses on the meeting between some civilized, beautiful Cro-Magnon folks and some violent, nasty Neanderthals.  Reminiscent of Tolkien's Orcs and Elves, the Neanderthals all have names like Thok and Ugg and Glop, and the Cro-Magnons mellifluous names like Sondamar and Alidor.  (Before you start yelling at me, yes, I made those up because I don't own the book any more and I don't feel like looking it up.  But my point stands.)

But it's not just the prehistorics.  Contrast two different tales of medieval monastic life -- Ellis Peters's Brother Cadfael series and Umberto Eco's The Name of the Rose.  Don't get me wrong, I love Brother Cadfael; his logic, compassion, and love for botany are all endearing, and Peters was a great mystery writer.  But the reality of life in western Europe in the twelfth and thirteenth centuries was undoubtedly closer to Eco's harsh, unwashed, rough-shod reality, with its starving peasants and superstitions and religious fanaticism, than it was to Peters's genteel knights and tradesmen and monks.

Like I said, I don't really object to fictional portrayals, even with their inevitable inaccuracies.  I've written a few stories set in the past myself -- the English Midlands in the nineteenth century (The Tree of Knowledge), pre-Civil-War Louisiana (The Communion of Shadows), eleventh century Iceland (Kári the Lucky), and Britain during the fourteenth century Black Death (We All Fall Down).  I hope I've skirted the line between realism and romanticism deftly enough to make it believable without being too dark and depressing.

But the fact remains that our ancestors didn't have it easy.  That we're here is a tribute to their tenacity, strength, and determination.  Whenever I consider archaeological finds, I'm always struck by how cushy a lot of us have it now, with our indoor plumbing and heat in the winter and electric appliances and modern medicine, all of which our forebears somehow survived -- at least for a while -- without.

The reason this all comes up is a rather horrific discovery in Spain of the site of a battle that took place in the third century B.C.E.  Again, I might be using the wrong word -- this wasn't a battle so much as a massacre.  A settlement near the current tiny village of La Hoya, in the province of Salamanca, was attacked by an unidentified set of marauders and basically slaughtered, their bodies being left to the scavengers.

A team led by Javier Ordoño Daubagna of Arkikus, an archaeological research company in Vitoria-Gasteiz, Spain, did the investigation, and came upon thirteen skeletons; nine adults, two adolescents, one young child, and one infant.  All of them showed signs of violent death.  One of the adolescents, a thirteen-year-old girl, had her arm cut off and flung three meters from her body, where it was found -- still wearing the five copper bracelets she'd been wearing when she died. 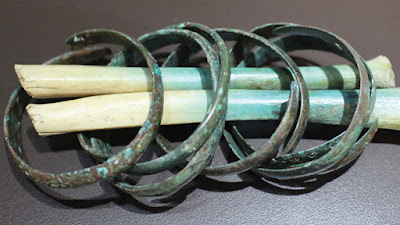 The fact that the bracelets and other valuable objects weren't taken indicates that whatever the reason for the attack was, it wasn't material profit.

It also puts a clearer and harsher light on what life in the past was actually like.  "If people think of the past as something peaceful and idealized," said archaeologist Ludvig Papmehl-Dufay, of Kalmar University, who was not involved in the current study, "that needs to be revised."

In any case, it's probably for the best that we do see our history through softer lenses.  The rigors that 95% of humanity endured back then, that (fortunately) far fewer have to endure now, were seriously depressing stuff.  And I suppose it's encouraging, really; for all the horrific stories in the news, we have come a long way as a species.  Not that we don't still have a long way to go.  But when asked when I would choose to live if I had a time machine, my answer is always "right here and right now."