Eye of the storm

Ever heard of Wolf-Rayet stars?  They deserve more notice than they get, as one of the most violently energetic phenomena in the universe.  The fact that the name is not in common parlance -- when even the most scientifically-uninterested layperson has heard of supernovae and quasars and black holes -- is probably due to a combination of (1) their rarity, and (2) the fact that the ones that are visible to the naked eye are pretty unimpressive-looking at first glance.  Gamma Velorum and Theta Muscae, both of which are in the Southern Hemisphere and never visible where I live in upstate New York, are Wolf-Rayet stars that look completely ordinary until you check out their light spectra and find out that there's something really extraordinary going on.
The first thing that becomes apparent is that they are hot.  I mean, even by stellar standards.  Wolf-Rayet stars have a surface temperature between 30,000 K and an almost unimaginable 210,000 K.  (By comparison, the Sun's surface is about 5,700 K.)  These temperatures fuel an enormously strong stellar wind, which blows away almost all of the lightweight hydrogen in the outer layers, and also ionizes most of what is left -- predominantly oxygen, nitrogen, and carbon.  They're at the head of the list of potential gamma-ray bursters -- stars that undergo sudden collapse followed by a colossal explosion, resulting in a blast of gamma rays collimated into narrow beams along the star's rotational axis.  So having a Wolf-Rayet star's rotational axis pointed toward your planet would be like staring down the barrel of a loaded gun.
They're also beautiful.  At least from a distance.  The reason all this comes up is because of a paper last week in Monthly Notices of the Royal Astronomical Society about one that's been called "a stellar peacock" -- the star Apep, in the constellation Norma.  This Wolf-Rayet star has blown carbon-laden dust from its surface, which its high rotational speed swept into a pinwheel. 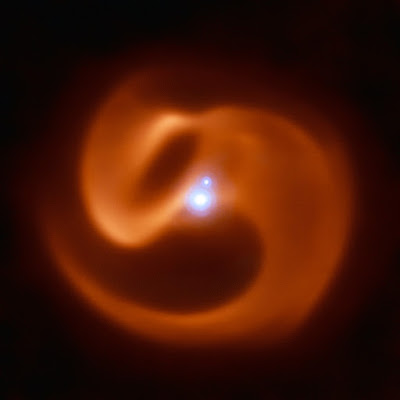 [Image licensed under the Creative Commons ESO/Callingham et al, The triple star system 2XMM J160050.7–514245 (Apep), CC BY 4.0]
The name Apep comes from Egyptian mythology -- Apep was the monstrous serpent who was the enemy of the god Ra.  Astronomer Joseph Callingham, one of the first to study Apep, thought the name was apt -- in his words it was "a star embattled within a dragon's coils."
All poetic license aside, the violent imagery is spot-on.  Wolf-Rayet stars eventually self-destruct, becoming black holes, but not until basically destroying anything unfortunate enough to be nearby.  So the bright spot at the center of Apep is the eye of a cosmic-scale storm.
Last week's paper, by a team led by University of Sydney student Yinuo Han, uses observational data from the Very Large Telescope in Chile to understand what is creating the spiral plumes.  The detail is phenomenal; in an interview with Science Daily, Han said, "The magnification required to produce the imagery was like seeing a chickpea on a table fifty kilometers away."
"[Wolf-Rayet stars] are ticking time bombs," said study co-author Peter Tuthill.  "As well as exhibiting all the usual extreme behavior of Wolf-Rayets, Apep's main star looks to be rapidly rotating.  This means it could have all the ingredients to detonate a long gamma-ray burst when it goes supernova."
It's hard to say anything about this group of stars without lapsing into superlatives.  "The speeds of the stellar winds produced are just mind-blowing," Han said.  "They are spinning off the stars at about twelve million kilometers an hour.  That's one percent the speed of light."
Fortunately for us, Apep is a safe 6,600 light years away, so it poses no danger to us.  If one was a lot nearer -- within 25 or so light years' distance -- it would be catastrophic.  The radiation bombardment could strip away the ozone layer, leaving the Earth's surface subject to massive irradiation.  There's decent evidence that some of the Earth's mass extinctions may have been caused by nearby supernovae (not necessarily Wolf-Rayets).  But to put your mind at ease, there aren't any supernovae candidates of any sort within what is rather terrifyingly called "the kill zone."
So that's a look at one of the most dangerous and beautiful phenomena in the universe.  I'm glad we're getting to see it, and find out a little bit about what makes it tick.
From a safe distance.
***************************************
This week's Skeptophilia book recommendation is brand new, and is as elegiac as it is inspiring -- David Attenborough's A Life on Our Planet: My Witness Statement and a Vision for the Future.
Attenborough is a familiar name, face, and (especially) voice to those of us who love nature documentaries.  Through series such as Our Planet, Life on Earth, and Planet Earth, he has brought into our homes the beauty of nature -- and its desperate fragility.
At 93, Attenborough's A Life on Our Planet is a fitting coda to his lifelong quest to spark wonder in our minds at the beauty that surrounds us, but at the same time wake us up to the perils of what we're doing to it.  His message isn't all doom and gloom; despite it all, he remains hopeful, and firm in his conviction that we can reverse our course and save what's left of the biodiversity of the Earth.  It's a poignant and evocative work -- something everyone who has been inspired by Attenborough for decades should put on their reading list.
[Note: if you purchase this book using the image/link below, part of the proceeds goes to support Skeptophilia!]