Lately, I've felt like I'm living in some kind of computer simulation run by aliens, only the aliens have gotten bored and/or stoned and now they're just fucking with us.

The obvious example is the increasingly unhinged stream of rants from Donald Trump, each of which seems to be designed to carry the message, "You think I sounded insane before?  Just wait till you hear this."  One example will suffice, because I suspect you don't want to read a bunch of Trump quotes, and I certainly don't want to dig them up and have to read them myself.  But this one, cheerfully delivered on the White House lawn and addressed to seniors ("Some of my favorite people," he said) would win some kind of award for bizarre pronouncements.  A direct quote: "You're not vulnerable, but they like to say the vulnerable, but you're the least vulnerable — but for this one thing you are vulnerable."
Sure!  Right!  What?
2020 has been one "hold my beer" incident after another.  I don't know about you, but I'm finding it increasingly hard to remember what it was like before things went loopy -- to be able to go out to a restaurant without a second thought and to a grocery store without a mask, to have enough letters in the alphabet to cover all the hurricanes, and to have Supreme Court nominees who were neither drunk frat boys nor homophobic right-wing religious fanatics.
But that old world has vanished.  I hope it's not forever, and that Election Day will turn us back toward sanity, because a lot of us are suffering from what I can only call Lunacy Fatigue.  We've been bombarded by crazy events to the point that our reaction has become a kind of despairing ennui. 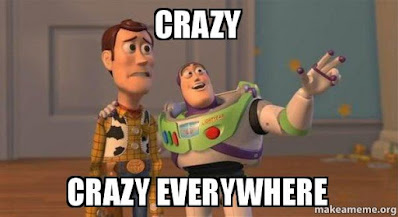 Which explains my reaction to a link sent to me by a loyal reader of Skeptophilia, about self-proclaimed "prophetess" and virulent Trump supporter Kat Kerr.  Kerr has been here before, most recently because of her attempt to turn aside a hurricane with prayer.  When it didn't work, and the storm slammed the Bahamas, she responded by cheerfully coming up with a reason that God hates the Bahamas.  Other claims from Kerr, which I swear I am not making up, were that when Brett Kavanaugh was confirmed to the Supreme Court, "aborted babies had a party in heaven," and that her prediction of the 2018 elections "turning the map red" wasn't actually false because "a lot of the Democrats who were elected are secretly Republicans."
So it's not like we should expect anything rational from her.  She didn't disappoint in that regard, when two days ago she said that God had dispatched a thousand "special-ops angels" to make sure Trump won re-election.  Here's the exact quote, because any summary I could write would blunt the edge of the complete batshit insanity:

I can just tell you this from heaven. Trump is going to win.  We in America are the land of the brave, the free, and the filled with God.  And I can tell you that whole event was filled with the presence of God. And yes, there were 1,000 angels waiting.  You know who these angels were?  I could see them sitting all up in the upper stands and everything, in the seats, and they were white—they just glow with the glory of God.  But they actually were wearing red, white, and blue robes.

And the Holy Spirit said, "These angels are special ops angels that were sent from Heaven back in 2016 to fight on behalf of America, on our president, on his administration, God’s plans that he has for this country."  And they were there to be sent out again right now.  And we all did that.  It was very powerful to see them.  They shoot past us like beams of light, and they were very powerful beings.

But it's not really newsworthy that a kook made a loony claim.  That is, after all, what kooks do.  What struck me reading it was how... pedestrian it sounded.  "Special-ops angels dressed in red, white, and blue, shooting past like beams of light?"  *yawn*  I wish I could say it was the weirdest thing that's happened this month, but it's not even the weirdest thing that's happened this week.  (My vote in that regard is that the thing the pundits are talking about most from Tuesday's vice presidential debate is the fly that was sitting on Mike Pence's head for two minutes.)

I've gotten to where I don't even want to look at the news, not because I'm afraid there'll be something upsetting -- that's nearly a given -- but because I'm tired of feeling like I'm trapped in a David Lynch film, where strange things are happening for no apparent reason and everyone's walking around with stunned expressions (what you can see of them behind their masks) wondering what the next random, pointless, chaotic plot twist will be.

I know it's dangerous for the sane people to get inured, because that's when the crazies cinch down control.  And it's not going to stop me from voting.  I'm just feeling a little dazed at the moment.  Maybe that's what happens when you're attacked by special-ops angels, I dunno.