It's all too easy lately to find reasons to criticize humans.  I'm guilty of contributing to it myself, by my focus on pseudoscientific nonsense; you can jump from "some humans do stupid stuff" to the cynical "all humans are irreparably stupid" without even realizing it.

It's worthwhile focusing instead on our accomplishments, some of which are downright amazing.  This year, I think we all need something to cheer us up and make us feel a little more optimistic about our potential as a species.  So today we're going to look at: the mind-blowing reconnaissance mission NASA has undertaken to collect, and bring back to Earth, material from the asteroid Bennu.

Bennu is interesting from a number of standpoints.  It's a carbonaceous asteroid, meaning it is high in the carbon-containing compounds that were probably abundant in the early Earth's atmosphere -- carbon dioxide and monoxide, methane, and hydrogen cyanide.  Because these were the raw materials from which the first biochemicals were synthesized, it's of serious interest to people like me who are obsessed with the possibilities of extraterrestrial life.  Astronomers tend to be more curious about Bennu because its composition is thought to be very similar to the material from which the Solar System originally coalesced, so learning about it might give us a lens into our region of the galaxy's very distant past.

And if you needed another reason, Bennu is one of the asteroids which periodically crosses the Earth's orbit, making it high on the list of eventual Earth strikes.  (Not to worry: it's not going to hit the Earth, or anything else, for at least another two hundred years, and the current surmise is that it's much more likely to hit Jupiter than it is to hit Earth.)

So in 2016, NASA launched the OSIRIS-REx mission, which first did a near pass and mapped out its surface to look for good spots for rock collecting, and then on the second encounter -- which happened three days ago -- dropped onto the asteroid with a maneuver that looked like someone bouncing on a pogo stick.  The six-second contact stirred up material from the surface, which was sucked into a collector.  OSIRIS-REx then zoomed back off into space for its return voyage to Earth, carrying what scientists hope is a sixty-gram sample of the surface of the asteroid.

OSIRIS-REx's trip (one way) from Earth to Bennu covered about 820 million kilometers.  The asteroid's diameter is about 530 meters; the spacecraft's is a little under seven meters.  I did a bit of back-of-the-envelope calculation, and discovered that our ability to hit Bennu from this distance is equivalent to hitting a target the size of a bacterium with a bullet the size of a virus -- from a kilometer away.

Oh, and it's hardly standing still.  Bennu is a fast-moving target, zooming along at 28 kilometers per second.

If that doesn't impress you, I can't imagine what would. 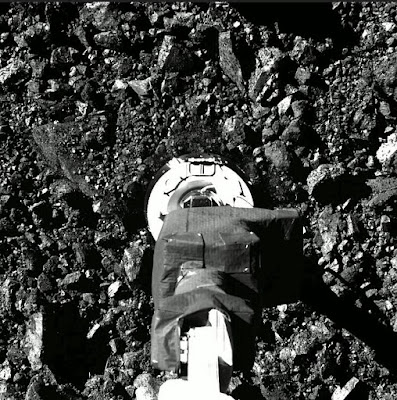 OSIRIS-REx's sampling arm, seconds before impact on asteroid Bennu on October 20, 2020 [Image is in the Public Domain courtesy of NASA/JPL]
"The spacecraft did everything it was supposed to do," said mission principal investigator Dante Lauretta of the University of Arizona.  "I can’t believe we actually pulled this off."

His elation and incredulity are understandable considering all of the things that could have gone wrong, and how slight the error would have to be to result in the spacecraft either plunging into a destructive crash or else missing the asteroid entirely.  And at that point, OSIRIS-REx had to function perfectly on its own -- at that distance, radio signals traveling at the speed of light take over eighteen minutes to reach Earth, and (even assuming an instantaneous response by NASA scientists) another eighteen to send back a command like "NO NO NO DON'T DO THAT!"
By that time, the spacecraft would either be rubble or else zooming away into space, and away from the target.
So the mission went off without a hitch.  Well, the first half of it -- they still have to get OSIRIS-REx back to Earth safely.  But I'd say given how flawless the first bit was, there's a good chance they'll accomplish the whole shebang, and we'll have some really interesting stuff to study.
When you consider things like this, it's reassuring -- the capacity for human accomplishment is limitless.  Yes, I know there's still idiotic stuff going on down here.  But I'm not ready to give up on humanity yet.  I find the OSIRIS-REx mission incredibly inspirational.
Gives me hope that there may be a bright future for our species yet.