Can I make the not-very-earthshattering observation that if you are explaining evidence supporting a belief, your argument is not made stronger by lying about it?

Especially if that belief includes the idea that your own personal religion is not only superior morally, but 100% true?

I'm referring to a story of dubious provenance that has been showing up all over the place lately, mostly on Christian apologetics sites, and then forwarded by people who (1) don't understand how science works, (2) don't know how to do a Google search to check for accuracy, or (3) would prefer something sound good than be correct.  Or all three.  I ran into it via the site Command the Raven, but other versions I've seen are substantially similar.  Here are a few excerpts, edited only for length:

For all you scientists out there and for all the students who have had a hard time convincing these people regarding the truth of the Bible – here’s something that illustrates God’s awesome creation and shows He is still in control.

Did you know that NASA’s space programmes are busy proving that what has been called ‘myth’ in the Bible is true?  Mr. Harold Hill, President of the Curtis Engine Company in Baltimore, and a consultant in the space programmes, relates the following incident: "One of the most amazing things that God has for us today happened recently to our astronauts and space scientists at Green Belt, Maryland.  They were checking out the positions of the sun, moon and planets out in space where they would be 100, and 1000 years from now.  We have to know this as we do not want a satellite to collide with any of these in its orbits."

So we're off to a flying start, with the claim that NASA has to be very careful to make sure that satellites in orbit around the Earth don't collide with the Sun or Neptune or anything.  You can see how that could happen.

Computer measurements and data were run back and forth over the centuries when suddenly it came to a halt, displaying a red signal, which meant that either there was something wrong with the information fed into it, or with the results as compared to the standards.  They called in the service department to check it out, and the technicians asked what was wrong.  The scientists had discovered that somewhere in space in elapsed time a day was missing. Nobody seemed able to come up with a solution to the problem.

Which brings up the awkward question of how you'd discover that a day was missing.  Or even what "there's a day missing" means.  Were the technicians sitting around, monitoring the satellite transmissions, and suddenly one of them got this horrified look on her face and said, "Wait... where the fuck did I put last Tuesday?"  Then all of the other technicians and engineers and physicists and so forth all start searching under desks and in storage closets and behind garbage cans and so on, but to no avail.  Last Tuesday is definitely AWOL.

Finally one of the team, a Christian, said: “You know, when I was still in Sunday School, they spoke about the sun standing still…”  While his colleagues didn’t believe him, they did not have an answer either, so they said: “Show us.”  He got a Bible and opened it at the book of Joshua where they found a pretty ridiculous statement for anyone with ‘common sense’.  There they read about the Lord saying to Joshua: “Fear them not, I have delivered them into thy hand; there shall not be a man of them stand before thee.” (Joshua 10:8).  Joshua was concerned because the enemy had surrounded him, and if darkness fell, they would overpower him.  So Joshua asked the Lord to make the sun stand still!  That’s right – “And the sun stood still and the moon stayed, until the people had avenged themselves upon their enemies.  Is this not written in the book of Ja’-sher?  So the sun stood still in the midst of heaven and hastened not to go down about a whole day.” (Joshua 10:13).

The astronauts and scientists said: "There is the missing day!"

So there was much rejoicing.  But then one of them pointed out that it wasn't a whole day that had been found -- it was only 23 hours and 20 minutes.  Which left 40 minutes unaccounted for, "which could mean trouble 1000 years from now."  Why it isn't trouble now, I have no idea, but concern for our distant descendants sent the NASA folks back on a search for the missing 2/3 of an hour.

And you'll never guess where they found it.

The Bible.  See, I told you you'd never guess.

As the Christian employee thought about it, he remembered somewhere in the Bible which said the sun went backwards.  The scientists told him he was out of his mind, but once again they opened the Book and read these words in 2 Kings.  Hezekiah, on his deathbed, was visited by the prophet, Isaiah, who told him he was not going to die.  Hezekiah asked for some sign as proof.  Isaiah said: “Shall the sun go forward ten degrees, or go back ten degrees?”  And Hezekiah answered: “It is a light thing for the shadow to go down ten degrees; nay, but let the shadow return backwards ten degrees.”  Isaiah the prophet cried unto the Lord, and He brought the shadow ten degrees backward, by which it had gone down in the dial of Ahaz.”  (2 Kings 20:9 -11).  Ten degrees is exactly 40 minutes!  Twenty-three hours and twenty minutes in Joshua, plus 40 minutes in 2 Kings accounted for the missing day in the universe!

Which would have been the cause for even more rejoicing, if the whole thing hadn't been made up.  I mean, it doesn't take a rocket scientist (a real one, I mean, like they have at NASA) to find the story eye-rollingly ridiculous, but it has been so widely circulated -- I've seen it three times on Facebook just in the last week -- that it actually has a Snopes page dedicated to it.  In it, we find out that Harold Hill was the president of Curtis Engine Company of Baltimore, but that's pretty much the only thing in the story that is true.  First off, Hill wasn't a NASA consultant.  It turns out that Hill was an evangelical Christian with a fairly loose interpretation of the word "true," because he'd read about the "lost day" legend in a book by Harold Rimmer entitled The Harmony of Science and Scripture and decided that the story would carry more punch if he claimed he'd witnessed the whole thing happening.  He embellished his account -- adding, of course, accolades such as "NASA consultant" for himself -- and repeated it many times in public speeches.  He even devoted a whole chapter to it in his 1974 book How to Live Like a King's Kid, apparently because by then, he'd told the tale so many times that he actually was beginning to believe it. 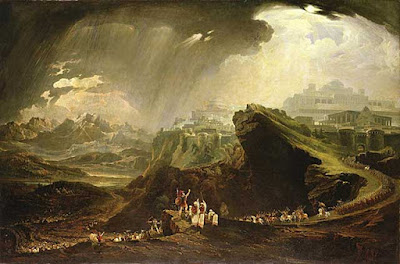 John Martin, Joshua Commanding the Sun to Stand Still Over Gibeon (1816) [Image is in the Public Domain]
And now with the amazing bullshit conduit that is the internet, the story has roared into life again.  Snopes writer David Mikkelson says about it:

To those who've given over their hearts to God and the Holy Word, this is a deeply satisfying legend.  Faith is, after all, the firm belief in something which cannot necessarily be proved, a quality that can leave believers (especially those who find themselves in the midst of non-believers) feeling unsatisfied.  As steadfast as their certainty is, they cannot prove the rightness of the path they tread to those who jeer at their convictions.  And this is a heavy burden to shoulder.  A legend such as the "missing day explained" tale speaks straight to the hearts of those who yearn for a bit of vindication in this life.  Being right isn't always enough: sometimes what one most longs for is sweet recognition from others.

Which may well be the case, but doesn't take away from the problem of a devout follower of a religion that considers "Thou shalt not bear false witness" as one of its fundamental teachings passing along a story that is essentially one long lie.  It makes me wish that as a corollary of the ninth commandment, Yahweh had seen fit to add, "And this meaneth that thou shalt spend five fucking minutes and do a Google search before thou postest this shit on Facebook."

So anyway.  No, NASA is not spending its woefully tiny budget paying scientists to verify the Old Testament.  There's no evidence whatsoever of a "lost day," because against what clock would you be able to verify that time had stopped 3,000 odd years ago?  I'd be much obliged if the people who think that God is going to bless them if they pass along this nonsense would just stop already.  Thank you.
*****************************************
This week's Skeptophilia book-of-the-week is one that has raised a controversy in the scientific world: Ancient Bones: Unearthing the Astonishing New Story of How We Became Human, by Madeleine Böhme, Rüdiger Braun, and Florian Breier.
It tells the story of a stupendous discovery -- twelve-million-year-old hominin fossils, of a new species christened Danuvius guggenmosi.  The astonishing thing about these fossils is where they were found.  Not in Africa, where previous models had confined all early hominins, but in Germany.
The discovery of Danuvius complicated our own ancestry, and raised a deep and difficult-to-answer question; when and how did we become human?  It's clear that the answer isn't as simple as we thought when the first hominin fossils were uncovered in Olduvai Gorge, and it was believed that if you took all of our millennia of migrations all over the globe and ran them backwards, they all converged on the East African Rift Valley.  That neat solution has come into serious question, and the truth seems to be that like most evolutionary lineages, hominins included multiple branches that moved around, interbred for a while, then went their separate ways, either to thrive or to die out.  The real story is considerably more complicated and fascinating than we'd thought at first, and Danuvius has added another layer to that complexity, bringing up as many questions as it answers.
Ancient Bones is a fascinating read for anyone interested in anthropology, paleontology, or evolutionary biology.  It is sure to be the basis of scientific discussion for the foreseeable future, and to spur more searches for our relatives -- including in places where we didn't think they'd gone.
[Note: if you purchase this book using the image/link below, part of the proceeds goes to support Skeptophilia!]