The mystery of the monolith

Back when I was a teacher, I was often the first person to arrive at the high school in the morning.  Not only am I a morning person, but it was really critical for me to have that quiet time to get prepared for class, get my thoughts together, and (most importantly) have a cup of coffee before the noisy hordes of students arrived.
I think it was about eight years ago, near the end of a school year (so mid-June-ish), that I parked my car in the otherwise empty parking lot and made my way into the dark, quiet hallway of the science wing.  My mind was in drift-mode, not thinking about much at all, when I unlocked my classroom door and switched the lights on.
And stopped dead in my tracks, my mouth agape.
In the front of my classroom was a large black monolith, just shy of three meters tall.  As I stood there, staring, there came over the loudspeakers the unmistakable first chords of the iconic theme music to 2001: A Space Odyssey.
It is one of the only times in my life that I have been wide awake and given serious consideration to the possibility that I was dreaming.
I walked to the front of the room as the brass instruments reached their crescendo and the timpani started its rhythmic booms, and that was when I started laughing.  The monolith was made of painted wood, and I had obviously been pranked -- very successfully, I might add -- by some creative students who knew of my love for science fiction.
Turns out it was a team effort between five students and the principal, who is a notorious practical joker.  They placed the monolith in my room and hightailed it back to the principal's office, where they watched for me over the security cameras so they could get the timing of the music right.  It really was an inspired prank, and I kept the monolith in the corner of my classroom for several years until it finally fell apart. 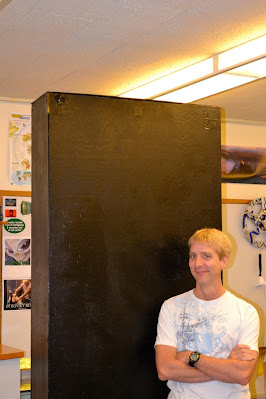 The reason all this comes up is because of a news story I have now been sent five times, about a peculiar discovery in the Utah desert.  Turns out some state employees, who were doing a survey of bighorn sheep populations in a remote region of the state, spotted something mighty peculiar -- a rectangular piece of metal sticking straight up out of the dirt.  The metal seems to be steel or something of the sort, and its polished surface stood out immediately against the reddish rock face behind it.
They landed the helicopter and investigated.  The metal plate was perfectly vertical -- ruling out something that had fallen from the sky and embedded itself -- and had no distinguishing marks of any kind. 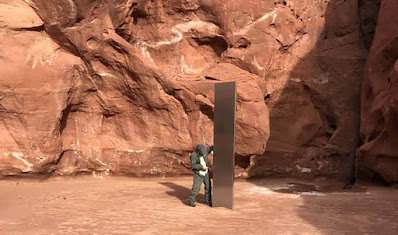 One of the state employees standing next to the Utah monolith
Well, as soon as the announcement was made, the furore started.  There were immediate comparisons to the alien monolith in 2001, some tongue-in-cheek, some apparently serious.  Conspiracy theorists had a field day with it, giving "explanations" -- to use the term loosely -- that included:
The discoverers are refusing to give details about the monolith's exact location, which of course makes all of the aforementioned so-and-sos waggle their eyebrows in a meaningful manner.  The alleged reason for the secrecy is that the monolith is in a remote region and if a bunch of loonies went to find it, which you know they would, they'd get lost and need rescuing.
But of course, that's what they would say.
I have to admit to some curiosity about why someone would do this.  I mean, it's pretty clearly a prank, along the lines of my students' Big Black Box, although it occurs to me to ask why you'd carry out your prank in a place where there was at least a passing likelihood no one would ever see it.  Even so, it's impressive; a piece of steel that big must weigh a lot, and that's not even including the bit that's buried.  Then there's the digging tools and cement and other stuff you'd have to haul in to install it, out there in the scorching heat of the desert, and you're looking at a significant effort.
So it is a little puzzling.  Perhaps at some point someone will 'fess up to being the perpetrator -- or maybe it'll stay a mystery, like the strange and fascinating Georgia Guidestones.  In the unlikely eventuality that there's anything more to this than some unusually committed and hardworking practical jokers, well, I suppose we'll just have to wait and see, given that the state employees who found it aren't giving us any details about where it is.  And the Utah desert is a big place to start searching if your only clue is "it's near some sheep and a big red rock."
Of course, my hunch is that there's nothing much to this, but that's hardly surprising.  And if I'm wrong, well, let's just hope this isn't the final act of the bizarre theater that has been 2020.
On the other hand, if it really is a communication device to summon Our Alien Overlords, maybe that'll be a good thing.  They can't fuck things up any worse than we've been doing lately.
**************************************
I'm fascinated with history, and being that I also write speculative fiction, a lot of times I ponder the question of how things would be different if you changed one historical event.  The topic has been visited over and over by authors for a very long time; three early examples are Ray Bradbury's "The Sound of Thunder" (1952), Keith Roberts's Pavane (1968), and R. A. Lafferty's screamingly funny "Thus We Frustrate Charlemagne" (1967).
There are a few pivotal moments that truly merit the overused nametag of "turning points in history," where a change almost certainly would have resulted in a very, very different future.  One of these is the Battle of the Teutoburg Forest, which happened in 9 C.E., when a group of Germanic guerrilla fighters maneuvered the highly-trained, much better-armed Seventeenth, Eighteenth, and Nineteenth Roman Legions into a trap and slaughtered them, almost to the last man.  There were twenty thousand casualties on the Roman side -- amounting to half their total military forces at the time -- and only about five hundred on the Germans'.
The loss stopped Rome in its tracks, and they never again made any serious attempts to conquer lands east of the Rhine.  There's some evidence that the defeat was so profoundly demoralizing to the Emperor Augustus that it contributed to his mental decline and death five years later.  This battle -- the site of which was recently discovered and excavated by archaeologists -- is the subject of the fantastic book The Battle That Stopped Rome by Peter Wells, which looks at the evidence collected at the location, near the village of Kalkriese, as well as the historical documents describing the massacre.  This is not just a book for history buffs, though; it gives a vivid look at what life was like at the time, and paints a fascinating if grisly picture of one of the most striking David-vs.-Goliath battles ever fought.
[Note: if you purchase this book using the image/link below, part of the proceeds goes to support Skeptophilia!]