I think one of the uniting characteristics of the topics that interest me is that they all have something to do with altering our perception of the commonplace reality around us.

This capacity for (in writer Kathryn Schulz's words) "seeing the world as it isn't" led me to writing fiction, but also to the weird and counterintuitive bits of quantum physics, the expansive vision of astronomy, and the fields studying that which no longer exists -- history, archaeology, paleontology.  It's this last one that brings this whole topic up, with a pair of discoveries revealed this week that leave me kind of awestruck.

The first, which came my way from my buddy Andrew Butters over at the wonderful blog Potato Chip Math, is about the discovery in South Africa of a two-million-year-old skull of Paranthropus robustus, a hominin considered a "cousin species" that coexisted with our direct ancestor species Homo erectus.

The find is remarkable from a number of perspectives, not least that a complete skull of any hominin is pretty unusual.  "Most of the fossil record is just a single tooth here and there so to have something like this is very rare, very lucky," said Angeline Leece, who participated in the research.  She added an evocative description of what the world was like when the owner of this skull was still alive and loping around on the African savanna.  "These two vastly different species, Homo erectus with their relatively large brains and small teeth, and Paranthropus robustus with their relatively large teeth and small brains, represent divergent evolutionary experiments,"  Leece said.  "Through time, Paranthropus robustus likely evolved to generate and withstand higher forces produced during biting and chewing food that was hard or mechanically challenging to process with their jaws and teeth — such as tubers.  Future research will clarify whether environmental changes placed populations under dietary stress and how that impacted human evolution."

It's fascinating to imagine what the world was like to these creatures, during a time when there were several intelligent hominin species coexisting.  I remember my evolutionary biology professor making that point; a lot of our attitude that species are these hard-and-fast little cubbyholes comes from the fact that we have no near relatives still alive.  Much more common in the natural world are groups of closely-related species all competing and coexisting.

But it's still a little hard to picture wandering around the place and seeing other human-like, but not-quite-human, animals out there doing their thing.

It also bears keeping in mind that the other animal species they'd have been around weren't like the ones today, either.  This point was driven home by the second discovery revealed this week, of a twelve-thousand-year-old frieze of cliffside paintings in Cerro Azul, Colombia, that show not only the usual assemblage of South American animals -- snakes, alligators, turtles, bats, monkeys, porcupines -- but mastodons, giant sloths, camelids, and some sort of three-toed ungulate with a trunk.

"These really are incredible images, produced by the earliest people to live in western Amazonia," said Mark Robinson, an archaeologist at the University of Exeter, who participated in the study.  "The paintings give a vivid and exciting glimpse in to the lives of these communities.  It is unbelievable to us today to think they lived among, and hunted, giant herbivores, some which were the size of a small car." 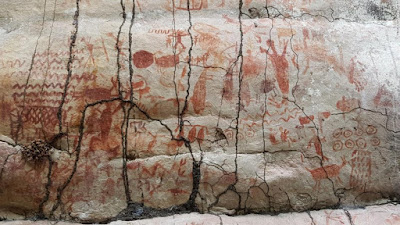 A small part of the Cerro Azul frieze
The size, scope, and detail of the drawings is phenomenal.  The paintings were made with ochre, a yellowish or reddish mineral, and cover the cliff face not only for miles horizontally, but for almost twenty meters vertically.  Whatever the purpose of this art -- whether it was purely decorative or had some kind of magical or symbolic significance -- the artists certainly were highly motivated.  Some parts of the frieze would have required ladders or climbing equipment to create, pretty impressive for what was at the time a more or less pre-technological society.

"These rock paintings are spectacular evidence of how humans reconstructed the land, and how they hunted, farmed and fished," said archaeologist José Iriarte, also of the University of Exeter.  "It is likely art was a powerful part of culture and a way for people to connect socially.  The pictures show how people would have lived amongst giant, now extinct, animals, which they hunted."
I find it fascinating that even back then -- at the tail end of the last Ice Age, when merely surviving must have been a challenge -- people were creating art.  And the fact that much of that art was depicting animals no longer extant adds a whole other layer of mind-boggling to the find.  This, and the South African skull discovery, give us a window into understanding how we became human -- how we went from savanna-dwelling apes to intelligent beings who have art, music, literature, science, and technology.
It's a journey that took us from the East African Rift Valley to pretty much every point on the surface of the Earth -- and has driven us along the way to look with wonder into the unknown vastness of the universe.  As Carl Sagan so poignantly put it, "We are a way for the cosmos to know itself."
********************************
One of the most compellingly weird objects in the universe is the black hole -- a stellar remnant so dense that it warps space into a closed surface.  Once the edge of that sphere -- the event horizon -- is passed, there's no getting out.  Even light can't escape, which is where they get their name.
Black holes have been a staple of science fiction for years, not only for their potential to destroy whatever comes near them, but because their effects on space-time result in a relativistic slowdown of time (depicted brilliantly in the movie Interstellar).  In this week's Skeptophilia book-of-the-week, The Black Hole Survival Guide, astrophysicist Janna Levin describes for us what it would be like to have a close encounter with one of these things -- using the latest knowledge from science to explain in layperson's terms the experience of an unfortunate astronaut who strayed too close.
It's a fascinating, and often mind-blowing, topic, handled deftly by Levin, where the science itself is so strange that it seems as if it must be fiction.  But no, these things are real, and common; there's a huge one at the center of our own galaxy, and an unknown number of them elsewhere in the Milky Way.  Levin's book will give you a good picture of one of the scariest naturally-occurring objects -- all from the safety of your own home.
[Note: if you purchase this book using the image/link below, part of the proceeds goes to support Skeptophilia!]