Today we're fortunate to feature a guest post by my friend, fellow blogger, and twin-separated-at-birth, Andrew Butters, whose blog Potato Chip Math is a must-read.  Like myself, Andrew is a devotee of astronomy, and here he'll take us on a voyage into deep space -- and give you a change of perspective you might never have considered.
Enjoy!
***************************************
I'll admit it, I'm a space nerd. I have been since high school and only got more intense when I started studying Applied Physics at university. There is a lot of weird science at the astronomical level and to comprehend it you have to wrap your head around concepts that you won't ever encounter in your daily life and then understand how to measure them. The two measurements that trip up just about everyone who hasn't studied them are time and distance. At an astronomical level those two things are astonishingly gigantic, so much so that to the average person they might as well have no meaning at all.

This is why, when I read a recent article on space.com, my mind, which studied this at a university level for several years, was sufficiently blown. Space.com does a decent job putting in lay terms what authors Linhua Jiang, Nobunari Kashikawa, Shu Wang, Gregory Walth, Luis C. Ho1, Zheng Cai, Eiichi Egami, Xiaohui Fan, Kei Ito, Yongming Liang, Daniel Schaerer, and Daniel P. Stark of the published article, "Evidence for GN-z11 as a luminous galaxy at redshift 10.957," explained in painstaking mathematical and scientific detail for the journal Nature Astronomy. I'll summarize it even further: space is fucking huge.

So, space is huge. So what? Well, for me, it puts my existence on this third rock spinning in circles around a rather average sun as part of a rather average galaxy into perspective. As with any good conversation on this topic, it’s probably a good idea to lead with a little Carl Sagan. Many of you have seen this picture before: 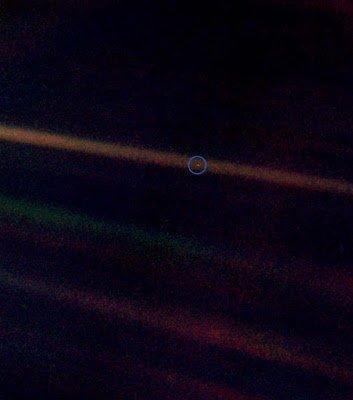 [NASA – Image in the public domain]
It was taken in 1990 by the Voyager I probe on February 14 at the request of Carl Sagan. It took a decade for the request to come to fruition, but after it did here’s what he had to say about it:

"We succeeded in taking that picture [from deep space], and, if you look at it, you see a dot. That’s here. That’s home. That’s us. On it, everyone you ever heard of, every human being who ever lived, lived out their lives. The aggregate of all our joys and sufferings, thousands of confident religions, ideologies and economic doctrines, every hunter and forager, every hero and coward, every creator and destroyer of civilizations, every king and peasant, every young couple in love, every hopeful child, every mother and father, every inventor and explorer, every teacher of morals, every corrupt politician, every superstar, every supreme leader, every saint and sinner in the history of our species, lived there on a mote of dust, suspended in a sunbeam.

"The Earth is a very small stage in a vast cosmic arena. Think of the rivers of blood spilled by all those generals and emperors so that in glory and in triumph they could become the momentary masters of a fraction of a dot. Think of the endless cruelties visited by the inhabitants of one corner of the dot on scarcely distinguishable inhabitants of some other corner of the dot. How frequent their misunderstandings, how eager they are to kill one another, how fervent their hatreds. Our posturings, our imagined self-importance, the delusion that we have some privileged position in the universe, are challenged by this point of pale light.

"Our planet is a lonely speck in the great enveloping cosmic dark. In our obscurity – in all this vastness – there is no hint that help will come from elsewhere to save us from ourselves. It is up to us. It’s been said that astronomy is a humbling, and I might add, a character-building experience. To my mind, there is perhaps no better demonstration of the folly of human conceits than this distant image of our tiny world. To me, it underscores our responsibility to deal more kindly and compassionately with one another and to preserve and cherish that pale blue dot, the only home we’ve ever known." — Carl Sagan, speech at Cornell University, October 13, 1994

To give you an idea of exactly how far away Voyager I was when it took that photograph, here’s a picture, though it’s not to scale. As we’ll see in a bit the scale of the Solar System, and indeed the Universe, is staggeringly massive. 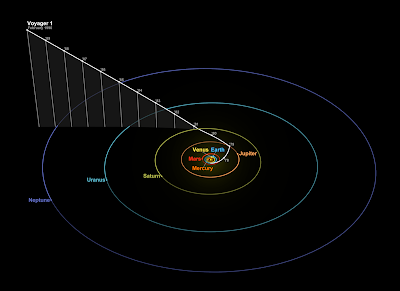 Joe Haythornthwaite and Tom Ruen [CC BY-SA 4.0], from Wikimedia Commons
How far away is that? It’s far. I mean, really far. The Pale Blue Dot photograph was taken 6 billion kilometers away. Voyager 1 launched in September 1977 and traveled at an average speed of roughly 60,000 km/h, and it still took thirteen years for it to get that far away. Neptune, the most distant planet in the Solar System takes 165 years to make a single trip around the Sun. When Neptunians say, “Winter is coming,” and have a look of concern on their faces it’s for good reason.

If the Moon Were 1-Pixel

This is all well and good, but what about beyond our Solar System? We orbit but one star out of hundreds of billions in our galaxy alone and our galaxy is but one of trillions in the observable Universe. To get a sense of what lies immediately beyond our Sun there are a couple of really cool, interactive sites you can visit Our Stellar Neighborhood, http://stars.chromeexperiments.com/, which allows you to zoom and pan and view 100,000 of the nearest stars. Solar System Model, https://www.solarsystemscope.com/, is a similar tool, but this one has more features and also includes options to show spacecraft, constellations, dwarf planets, comets, and a lot more. Still, nothing we’ve seen so far gets us out of our galaxy, the Milky Way, at the center of which is a black hole.

What about beyond our galaxy? A few years ago, while pondering the vastness of the Universe, some smart person at NASA decided that they would take the Hubble Telescope and point it at a small square of nothingness to see what they could see. Suffice it to say they were not disappointed. 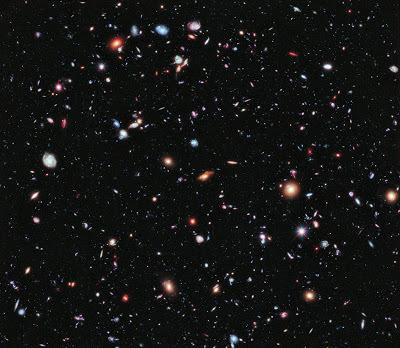 Which is all fine and dandy, but again, people have a hard time comprehending the scale. All of our reference points are too small and too slow. Fortunately, someone at NASA put together something that shows that even if you travel at the upper limit for speed – the speed of light – it takes a really long time to get anywhere. One could say that the speed of light in that respect is rather slow. Put another way, space is huge.

How long it takes for light to travel between the Earth and Mars
Finally, for anyone wondering where God and religion fit in, I will leave you with this (enlarge the photo when it loads and scroll):


Other Important and Interesting Links:

How Big is the Universe?

******************************************
This week's Skeptophilia book recommendation is apt given our recent focus on all things astronomical: Edward Brooke-Hitching's amazing The Sky Atlas.
This lovely book describes our history of trying to map out the heavens, from the earliest Chinese, Babylonian, and Native American drawings of planetary positions, constellations, and eclipses, to the modern mapping techniques that pinpoint the location of stars far too faint to see with the naked eye -- and objects that can't be seen directly at all, such as intergalactic dust clouds and black holes.  I've always loved maps, and this book combines that with my passion for astronomy into one brilliant volume.
It's also full of gorgeous illustrations showing not only the maps themselves but the astronomers who made them.  If you love looking up at the sky, or love maps, or both -- this one should be on your list for sure.
[Note: if you purchase this book using the image/link below, part of the proceeds goes to support Skeptophilia!]